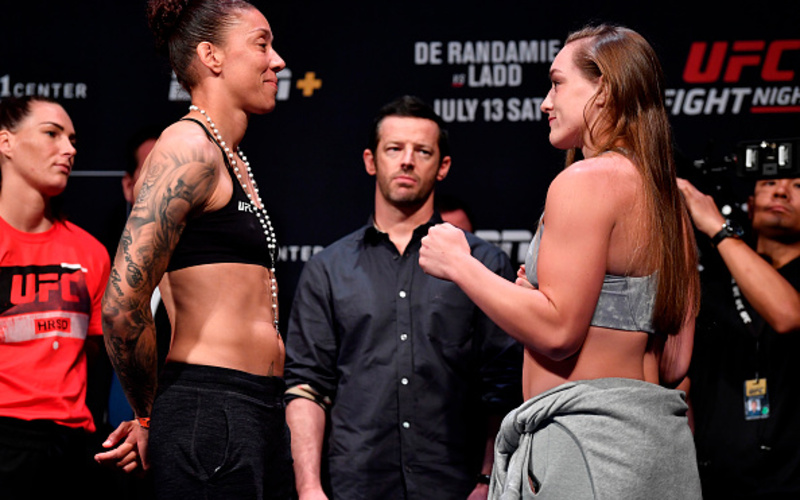 Both ladies are currently on win streaks as Ladd is undefeated at 8-0 and de Randamie has won four straight. De Randamie’s most recent win came in November of 2018 when she defeated Raquel Pennington by unanimous decision at UFC Fight Night 139. She will look to earn a possible rematch against the champion, Nunes, who beat her by TKO in 2013.

Ladd’s most recent win came in May at UFC Fight Night 152 when she defeated Sijara Eubanks by unanimous decision. Her two wins prior to that included TKO victories over former Invicta FC bantamweight champion, Tonya Evinger, and Lina Lansberg. She will be looking to earn her first title shot with a win over de Randamie.

In the co-main event, “The California Kid”, Urijah Faber returns from his nearly two and a half year retirement to take on Ricky Simon. Faber’s retirement fight came at UFC on Fox 22 when he defeated Brad Pickett by unanimous decision. He will be facing an opponent that has won eight straight including wins over Rani Yahya, Montel Jackson, and Merab Dvalishvili. Simon will be looking to defeat the former WEC champion for the biggest win of his career.

Starting the main card will be a middleweight fight between Marvin Vettori and Cezar Ferreira. Following that will be another middleweight fight as Karl Roberson takes on UFC newcomer, Wellington Turman. Finally, before the main event, Sacramento’s own Josh Emmett faces Mirsad Bektic in a featherweight match up.

Follow along with MMASucka as we provide you with the results throughout UFC Fight Night 155.