It is time to stop referring to Umar Nurmagomedov as “Khabib Nurmagomedov‘s cousin.” The 23-year old Dagestani prospect improved to 10-0 with a first round rear naked choke victory over veteran Taras Grytskiv at GFC 14. The win was Nurmagomedov’s fourth career submission victory, and his second career first round finish.

As many would expect with a Nurmagomedov, most of this fight was spent on the floor of the cage. In the first exchanges of the fight, though, Umar Nurmagomedov showed flashes of his excellent kicking game. He threw two inside leg kicks and a side kick to the body of Grytskiv to start the fight. Grytskiv charged forward recklessly, giving Nurmagomedov the perfect chance to get the fight to the ground.

When the two fighters hit the mat, they wouldn’t get back to their feet for the rest of the fight. Umar Nurmagomedov showed flashes of his cousin on the ground. He tied up the legs of Grytskiv very effectively, giving him no room to work with. Another thing that Nurmagomedov did very well was control his opponent’s wrists. This presented him with the opportunity to land some effective ground and pound to the body and head. Whether he was in full mount or in his opponents guard, Nurmagomedov was very effective and efficient with his ground attack.

Some heavy ground and pound strikes caused Grytskiv to present his back to Nurmagomedov. He wasted no time in sinking in the very tight rear naked choke and securing his tenth career victory.

Headed to the UFC?

Tom Aspinall to Return in October 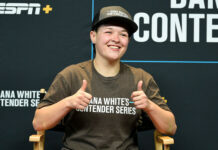