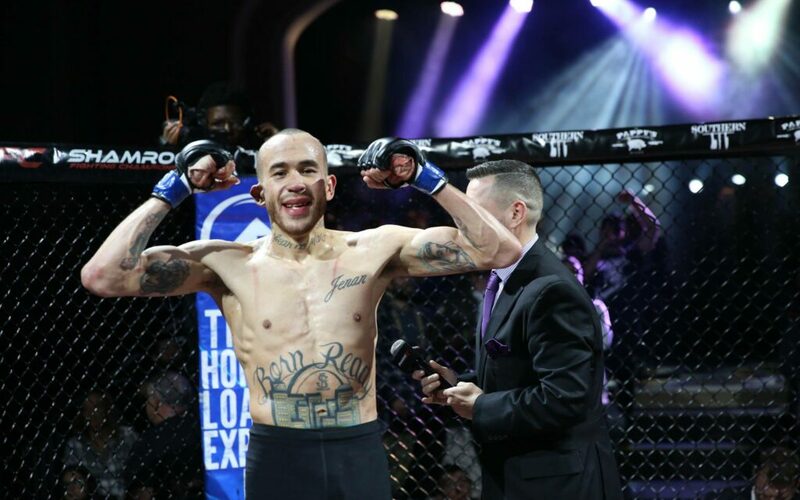 Sean Woodson only had one week to prepare himself for the biggest fight of his MMA career to date. However, he doesn’t seem to mind, given the opportunity.

“I’m ecstatic,” Woodson told MMASucka. “Super happy. This is what I’ve been waiting for.”

Woodson said he was at home unwinding with some Xbox between training sessions, while charging his phone that was set to ‘vibrate.’

“I happened to look down, and I had a ton of missed calls, Face-times and messages from my manager,” he said. “Before I even got on the phone, I knew he had hit me up for the Contender Series.”

Woodson had a fight lined up for August 17, so he’s in shape for the Contender Series bout despite the short notice. He initially thought making the featherweight limit would be an issue, but the weight cut hasn’t been a problem so far.

Instead, all of Woodson’s focus is on McKinney, who he said is “definitely my toughest opponent to date.” Though, Woodson insists McKinney doesn’t present any stylistic challenge he isn’t ready for.

Woodson believes the match-up will be McKinney’s wrestling and solid ground game against his 6 feet, 2 inches frame and 78-inch reach. He knows McKinney will attempt to wrestle him early and often.

“I see me stuffing all his takedowns,” Woodson said. “I know he’ll be coming for that right off the rip. I’m just going to stay calm and fight my fight. I’ll keep my range. After I stuff a few takedowns and he realizes I’m a well-rounded fighter and not an easy match-up for him, I’m going to pressure him standing and stay in his face the entire time until he breaks.”

At this point, Woodson knows what he needs to do to earn a contract from UFC president Dana White. However, with one week’s notice and a weight cut that’s sure to collect some sort of toll, Woodson is focused on getting his hand raised.

“Not too many guys are going to get a contract with a decision win,” he said. “[Dana] wants finishers, he wants killers. I know I have that quality; I know I’m a killer. But taking this fight on a week’s notice and cutting this weight and stuff, my main goal is to go out there and get the win. I knew when I’d get my Contender Series opportunity, I’d have to take more risks than normal, really go for it and put it all on the line. And I am putting it all on the line, but this fight, my main focus is just to win.”

For Woodson, even just a win in some kind of impressive fashion could catch the eye of UFC brass. After all, he figures to enter as a large underdog against a man who some regard as the best prospect on the card. Over 130 users on MMA database Tapology predicted the fight, and 85 percent picked McKinney. Among those, about 75 percent of them believe he’ll get it done via submission.

However, Woodson relishes the role of playing spoiler. It’s a role he’s grown accustomed to so far in his young career, where he’s picked up wins in Missouri-based promotion Shamrock FC against the likes of Rashard Lovelace (twice). He’ll get to play the role again in front of White and the UFC matchmakers.

“I love it, man,” he said. “I feel like I’m playing with house money, and that’s my favorite way to play. All the pressure’s on [McKinney]. I’m taking the fight on a week’s notice. I’m the underdog. I saw in a different article somewhere that he’s the biggest prospect on this entire card. That really excites me, man. I love proving people wrong. That’s what I’m going to do on Tuesday.”

Woodson said beating McKinney and hearing his name called for a UFC contract would mean “everything” to him.

“This is my entire life’s work,” he said. “I’ve dedicated everything to this. This would truly be a dream come true.”

First he has to get by McKinney, a feat which he predicts he’ll accomplish via third-round stoppage.

“He’s going to come at me hard right off the bat,” Woodson said. “I’m going to weather his storm, and I feel like he won’t weather mine.”

Dana White’s Tuesday Night Contender Series 2019: Week 5 goes down Tuesday, July 23 from Las Vegas. The card will be available to watch on ESPN+.