Since his start in the UFC, “Platinum” Mike Perry, has been an interesting figure. He’s loud, brash, and tends to be the perfect meme material. For a while, I’ve been studying the Florida man, and his fighting style is exactly like his personality. It’s bombastic, encouraging in some instances, but most of all, it’s crazy.

Like most Florida men, Perry makes bizarre headlines. His style is defined by flashes of brilliance but also strange depreciation. In this article, I will try to make some sense of what has happened to Perry since his UFC debut. I hope to shine a light into his thought process and where he might end up in the future.

In his UFC debut, Perry showed a basic understanding of how to land his shots. Against Hyun Gyu Lim, Perry noticed that whenever he threw a strike, Lim would quickly rush in and hook wide. This gave him the opportunity to draw him in and land his hard shots.

Perry would also show a dexterous lead leg against Danny Roberts in his next outing. Perry’s habit of putting his weight to the rear leg allows him to be light on the front foot, which carries him into his kicks.

Against Roberts, Perry struggled to keep his head safe as his head movement was non-existent. But then, and true for the rest of his career, he would take damage in order to walk Roberts down and land power punches.

While Perry showed he can decently cut the cage and use his kicks to hold his man in place, he still struggled deeply when his opponent could technically strike then pivot off. With no way to get himself into his favored range, this would send him his first loss.

In his first loss to Alan Jouban, Perry showed the fundamental limitations of his style. Perry himself knows he hits hard, but to hit hard one must put his weight into his punches. Truly sharp fighters will throw plenty of light strikes to soften his opponent up, only to later use those same strikes to throw and land hard. Perry, unfortunately, has yet to learn that lesson and Jouban was able to stick and move, using his kicks and moving to the left.

Perry just couldn’t keep Jouban still and would eventually be exhausted by the constant body kicks and stinging punches.

Still, one can chalk this loss up to a learning experience for Perry. He showed a good chin, persistence, and great power. But, he needed to learn to cut the cage and keep his man in place.

The Florida man would find his last great performance (so far) against Jake Ellenberger. For Perry, he came into the fight with more stability in mind. His footwork was in-and-out and his strikes varied based on that same movement.

Perry’s long-bladed stance worked against Ellenberger, mostly because he worked his dexterous lead leg as a variation to his jab. His added footwork moved him in to jab as well, with both these strikes Ellenberger was stuck on the outside.

This was promising as it showed that Perry can play the outside game, throwing jabs and stinging with kicks. However, he never made the next logical step, which was to feint his jab and come with harder punches or feint a kick and punch. This left him once again, running forwards and getting clipped coming in.

However, Perry’s aggressive and explosive clinch game gave him the opportunity to nail Ellenberger after a hopping lead kick.

It was the first time I had seen Perry logically use the jab and lead kicks in order to frustrate his opponent. It showed that Perry can stick to a gameplan and combine his tools in order to get his man thinking and panicked. However, it would be the last time we would see innovation from Perry.

Burning Out the Prospect

Too Much Too Soon

The Florida man’s next fight would be against the overmatched Alex Reyes, as Perry could simply charge into Reyes and overpower him. Whether it was the influence of this fight or something inbetween the two, Perry would look completely different in his fight against Santiago Ponzinibbio.

Against Ponzinnibio, Perry came out looking the same as he did against Ellenberger, however, within the first minute, he began to over-swing.

Perry had removed his in-and-out movement, with upper body movement with his hands down. His kicks were mostly abandoned as Ponzinibbio’s circling seemed to frustrate Perry, but it was because he lacked the same footwork that carried him into kicking range.

Compare the two clips. When Perry bursts forwards looking to swing, he misses badly. But when he sticks to his lead kicks, it keeps Ponzinibbio in place, ready to be hit.

Because Perry replaced his footwork and consistent jab with overeager upper body movement, Ponzinibbio was free to work off his jab and sting Perry.

Of course, Perry’s bad habit of overeager swinging like in the Ellenberger fight bit him once again. This time, however, Ponzinibbio could and would punish Perry badly for his mistakes.

Perry would go onto lose the decision and it felt like he had taken a major step back. Perhaps he thought he could power through Ponzinibbio, or perhaps he simply abandoned the game plan. Either way, this fight would set the course for his career so far.

In an effort to get Perry back on his winning ways, the UFC set up a fight between him and Max Griffin. Griffin was a fighter that Perry should have taken on after the Ellenberger fight, he was technical, but his experience was far less than Ponzinibbio. However, in true Florida man fashion, Perry bizarrely did not learn from the Ponzinibbio fight and would take even more damage as a result.

Griffin was not as close to a striking savant as Ponzinibbio, but Perry simply couldn’t bring himself to throw light strikes and work off his kicks as he did against Ellenberger. While I feel like a broken record, Perry’s success didn’t come from his bursts of rushing violence, but from the stinging light strikes, that numbed his opponent into forgetting his power.

To restate my point, compare these two clips.

Mike Perry lands his left hook because he feints the jab. This was one of the handfuls of times he does this in the fight and the very next clip is Perry swinging for the fences. He has power, but that power is misplaced.

Perry after this fight would fight the lightweight Paul Felder and simply out muscle him. Once again he would take incredible damage. However, after a quick submission loss to Donald Cerrone, he would fight Alex Oliveira.

The Oliveira fight showed that Perry has indeed plateaued as a fighter. The once explosive Florida man had become stagnant and slowed. Perry had lost even that crazy in-your-face attitude but instead stood out at range, waiting on Oliveira and crouching down. He took shots repeatedly and the fight just simply looked like it had already left him.

It was a sloppy fight and Perry had clearly shown that he can get hurt far more often and no longer had any semblance of footwork. This was a Perry that has lost his step far lower than when he had first started.

When Mike Perry had first made his name known to the world, I was excited. Despite his controversial character and personality, he was a fun banger. He hits incredibly hard and some of his knockouts have been my favorites to rewatch.

But Perry’s career should be a warning sign for most prospects. Losses change who you are, but more important is how you improve after the loss. Perry has both changed camps and returned to his old camp, but the depreciation of his technique has continued.

His next fight is against Vicente Luque, a hard-hitting brawler that will stand with Mike Perry. Unfortunately, I believe that Perry no longer has the chin nor the mind to brawl with tighter and just as powerful hitters. In studying the Florida Man, I had hoped to find the best memes from the craziest of hitters. But instead, I find myself worried for Perry’s next fight, he may win but it will still take a toll on him.

I don’t think the Florida Man is quite the same anymore. 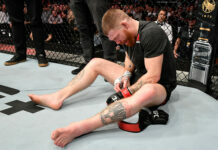