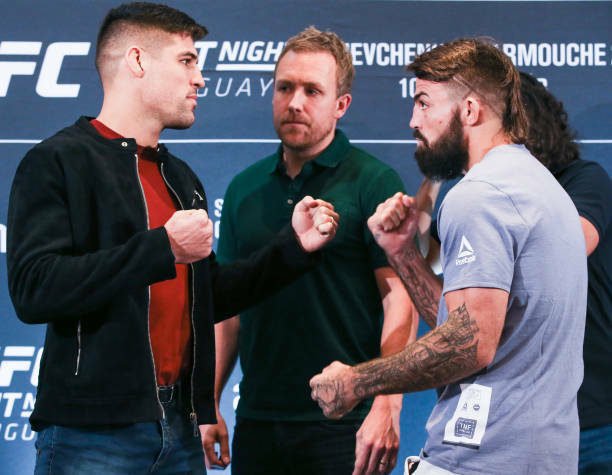 The UFC invades South America this weekend to bring UFC on ESPN+ 14 live from the Antel Arena in Montevideo, Uruguay. We will have UFC on ESPN+ 14 results for you all night long. MMA fans will be treated to 13 fights on the card including an exciting co-main event between Vicente Luque and Mike Perry. There will be a title on the line in the main event as Valentina Shevchenko is set to defend her flyweight belt against Liz Carmouche. Other notable fights on the card include Bobby Moffet fighting Enrique Barzola. Volkan Oezdemir takes on Ilir Latifi and Tecia Torres will matchup against Marina Rodriguez.

The co-main has potential Fight of the Night written all over it. Vicente Luque is stepping into the cage against Mike Perry. We last saw Vicente Luque in the UFC cage back in May where he had an impressive first-round knockout against Derrick Krantz. Since signing with the UFC in 2015 Luque has gone 9-2 and currently is on a five-fight winning streak. All five of those wins coming via stoppage.

Mike Perry will look to add another win against a Brazilian to his record. Perry is coming off a unanimous decision win in April against Alex Oliveria. Since joining the UFC back in 2016 Perry has had fights against notable names like Donald Cerrone, Paul Felder, and Santiago Ponzinibbio. Currently sitting at 6-3 in the UFC Perry is looking to show people that he belongs in the UFC welterweight division.

Valentina Shevchenko takes on Liz Carmouche for the women’s flyweight title in the main event. Shevchenko and Carmouche fought once before back in 2010, Carmouche ended up winning that fight via doctor stoppage. Both fighters have grown tremendously since that fight.

Schevchenko won the flyweight title back in December of 2018 where she defeated Joanna Jedrzejczyk via unanimous decision. She then had her first title defense back in June where she knocked out Jessica Eye with an impressive head kick. Schevchenko is currently on a three-fight winning streak and is looking for another impressive title defense.

Since joining the UFC in 2013 Carmouche is finally looking to get some UFC gold on her waist. Carmouche has won four out of her last five fights, including two straight wins at the 125-pound division. Carmouche last saw defeat back in 2017. She was on the wrong end of a split decision victory against Alexis Davis.

Follow along with MMASucka as we provide you with the results throughout UFC on ESPN+ 14.