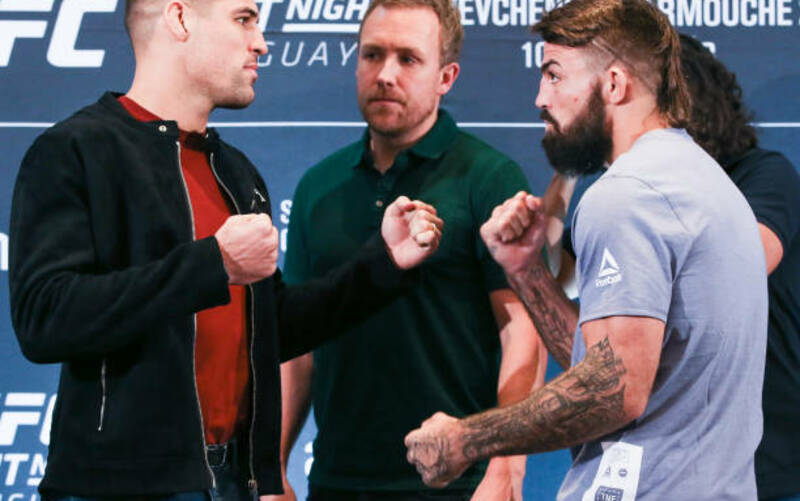 The UFC makes the trip to Montevideo, Uruguay this weekend live from the Antel Arena. This article is a UFC on ESPN+ 14 main card preview, where we will take a look at the six bouts on the main card. In the main event, UFC flyweight champion Valentina Shevchenko faces Liz Carmouche for the flyweight title. Meanwhile, welterweight sluggers battle in the co-main event as Vicente Luque fights Mike Perry. Here is our UFC on ESPN+ 14 main card preview.

In the UFC on ESPN+ 14 main card opener, American Top Team’s Enrique Barzola faces off against Fight Ready’s Bobby Moffett. Barzola is coming off a decision defeat to Kevin Aguilar in March. Before the loss, Barzola had won four-straight bouts – all via decision. The 30-year-old is 5-2 in the UFC, winning The Ultimate Fighter Latin America Season two back in 2015. On the other hand, Moffett is 1-1 in his UFC career. The “Wolfman” earned his UFC roster spot on Dana White’s Contender Series where he finished Jacob Kilburn in the second round with his signature D’Arce Choke. In his UFC debut, he controversially finished Chas Skelly with the same move (albeit Skelly protested the stoppage and he didn’t tap and said he didn’t lose consciousness). In his most recent showing, Moffett suffered a decision loss to undefeated prospect Bryce Mitchell.

With both men coming off losses, Barzola and Moffett will be eager to correct that defeat. Both men are well-rounded and I expect a competitive bout to kick off the main card. Who will bounce back, Barzola or Moffett?

In a collision of Brazilian Jiu-Jitsu black-belts, Oskar Piechota faces Rodolfo Vieira in a middleweight contest. Piechota is coming off his first loss as a professional, as he was submitted by Gerald Meerschaert 13-months ago due to a rear-naked choke. Piechota is 2-1 in the UFC and is a former Cage Warriors middleweight champion. The 29-year-old has finished ten of his 11 victories, five via submission and five via (T)KO.

Meanwhile, Vieira is making his UFC debut. Nicknamed “The Black Belt Hunter”, Vieira looks to score his sixth consecutive victory. The 29-year-old is a four-time Brazilian Jiu-Jitsu world champion and a seven-time World Cup champion. Since debuting in MMA in 2017, Vieira has finished all of his wins, four via submission and the other via ground and pound. The Brazilian earned three wins in ACA, where he most recently submitted undefeated Russian Vitaly Nemchinov in just over two minutes back in June. The record of Vieira’s opponents when he fought them equals 20-7, which isn’t bad for a UFC debutant.

Unless Piechota knocks out Vieira early on, this fight is going to hit the ground and that is where Vieira does his best work. But, Piechota is well-rounded and also has ground skills. Which black-belt will reign supreme, Piechota or Vieira?

In the third contest on the UFC on ESPN+ 14 main card, top contender collide as Volkan Oezdemir faces Ilir Latifi. Oezdemir has come across tough times within the last 20 months, losing three contests in a row. Most recently, Oezdemir lost a split decision to undefeated prospect and fellow top contender Dominick Reyes (in a contest which the majority of people thought Oezdemir won). The 29-year-old is a former title-challenger and his only fell short against fellow contenders in the UFC.

Latifi is also coming off a loss, a unanimous decision defeat to Corey Anderson at UFC 232. Before that, however, Latifi did win back-to-back bouts, highlighted with a submission victory over UFC veteran Ovince Saint Preux. Like Oezdemir, Latifi has only lost to top contenders inside the Octagon. The 36-year-old needs a win in this contest however if he hopes to compete for a UFC title one day.

In a must-win contest for both men, I can see two scenarios. Either, someone gets finished inside one round, or, we get a lacklustre showing where both men are tired in a gritty match. Who will get back in the win column, Oezdemir or Latifi?

In the next contest on the UFC on ESPN+ 14 main card, Humberto Bandenay welcomes Luiz Eduardo Gargorri to the UFC. Bandenay has lost back-to-back contests after demolishing Martin Bravo in his UFC debut. Since then, however, he got stopped early by Gabriel Benitez and then outpointed against Austin Arnett. It is do or die for Bandenay if he wants to keep his spot on the roster.

Garagorri, on the other hand, is undefeated as he enters the UFC with a perfect 12-0 record. However, his opposition has been poor on the regional circuit. In his most recent showing in May, he was matched against a debuting fighter. As most expected, Garagorri finished early in the first round but hasn’t faced a test really so far in his four-year MMA career. However, as he is from Uruguay, I’m not surprised to see him compete on this card. The 30-year-old has finished ten of his 12 wins, six via submission and four via (T)KO.

Though he is from Uruguay, I’m shocked to see Garagorri on the main card, especially against Bandenay. Will Garagorri win on home soil or will Bandenay score another quick finish in his opponents back yard?

In a potential Fight of the Night candidate, Brazil’s Vicente Luque battles America’s Mike Perry at 170-pounds. Luque has won his last five contests, all via stoppage. “The Silent Assassin” most recently finished Derrick Krantz via first-round knockout back in May. Since joining the UFC in 2015, Luque has gone 9-2, with all his victories via stoppage and his only losses have come against Leon Edwards and Mike Graves. A win over Perry should guarantee that Luque finally gets a ranked opponent in his next outing.

However, Perry is attempting to spoil that plan and continue to work his way up the welterweight with back-to-back wins over Brazilians. Most recently, Perry defeated Alex “Cowboy” Oliviera via unanimous decision in April. The 27-year-old has faced tough competition throughout his first nine fights in the UFC, facing Donald Cerrone, Santiago Ponzinbbio and Paul Felder amongst others. A win over Luque would be the biggest win in his five-year career and would perhaps earn him a top-15 foe next as well.

I cannot see a scenario where this fight isn’t exciting. Both men will be willing to trade into either someone falls or they are tough enough to withstand 15-minutes of fury. Either way, it should be fun and both men may walk away with a $50K bonus afterward. Will Luque extend his winning streak to six or will Perry defeat another Brazilian as the underdog?

In the main event, flyweight champion Valentina Shevchenko rematches MMA veteran, Liz Carmouche. However, this time UFC flyweight gold on the line. When they first met in 2010, Carmouche won via doctor stoppage in the second round.

Now, nine years on, Shevchenko is a -1300 favorite heading into the rematch. Since losing to Carmouche, Shevchenko has won ten fights, lost two close decisions to two-weight champion Amanda Nunes and won the UFC flyweight championship in December of 2018.

Meanwhile, Carmouche has won eight and lost six since, but enters the bout with back-to-back wins at 125-pounds. She has also won four of her last five, with her only loss coming via split decision.

It’s a much different fight to what it was nine years ago and it is understandable why Shevchenko is such a heavy favorite going into the rematch. However, Carmouche is looking to turn back the clock is to finally get her hands on UFC gold. Will Shevchenko prove she is unstoppable at flyweight or will Carmouche pull off the massive upset to become UFC champion at 35-years-old?