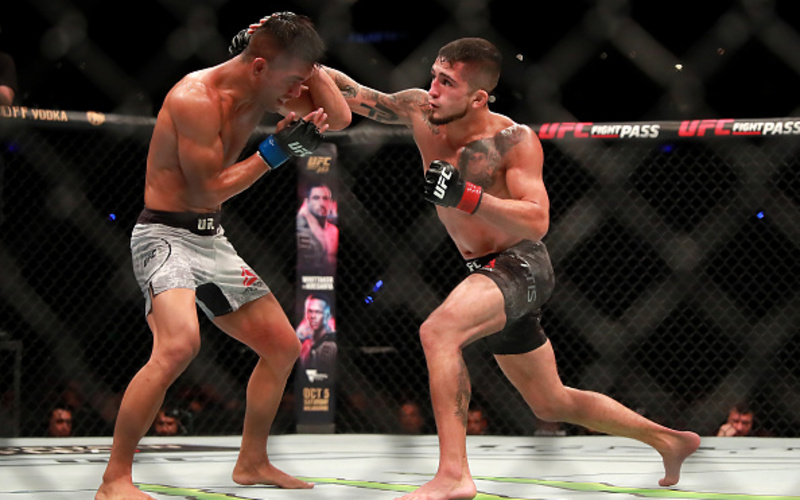 UFC Fight Night 159 (informally known as UFC Mexico) had a preliminary card with four decisions, two TKOs, and one submission. The Mexican combatants on the prelims went 1-1 in front of their home country. Join us as we delve into each preliminary bout, fight-by-fight.

TUF Latin America standout and hometown hero Jose Quinonez would headline the preliminary card against Peru’s Carlos Huachin. Despite having lost his most recent fight against Nathaniel Wood, Quinonez seemed to have momentum on his side. After all, he had won in four of his last five Octagon appearances.

Huachin, on the other hand, was coming off a loss in his UFC debut. At 23-years-old, Huachin was also the youngest competitor on the UFC Mexico fight card. But he was also a proven power puncher. He needed to be taken seriously, and Quinonez seemed to do his homework. Jose Quinonez outpointed Carlos Huachin to a unanimous decision victory. His former TUF coach, Cain Velasquez was surely proud of his old student as he watched him from the crowd. Jose Quinonez has now won five of his last six. Carlos Huachin falls to 0-2 in the UFC.

Polo Reyes would be fighting in his home nation of Mexico for the first time since his stint on TUF Latin America. He would also be making his featherweight debut. His opponent was Canadian kick-boxer, Kyle Nelson. Nelson was 0-2 in the UFC. To him, this fight was “do or die.” Like Reyes, Nelson had lost at lightweight and decided to make the cut to featherweight. Despite dropping to 145, Nelson stated in the lead up to the fight that he hit “just as hard as any welterweight.” He also foresaw being labeled the bad guy when he “knock[ed] the Mexican out in Mexico.” His prediction came true in a big way. Kyle Nelson finished Polo Reyes with a standing TKO stoppage in the first round. Getting a definitive victory in enemy territory is a testament to what Nelson may have to offer in the UFC.

Ariane Carnelossi was making her UFC debut. To those seeing her for the first time, she was noticeably muscular. The Brazilian was also riding a 12-fight winning streak coming into this bout. Her opponent Angela Hill had lost three of her last four. Hill was also eight years her elder.

Despite some apparent disadvantages coming into the fight, Hill proved to be the dominant victor. She utilized her seasoned Muay Thai striking to secure the first two rounds. In the third round, Hill landed a slashing elbow that would cause doctors to examine damage on her opponents face. After reviewing the cut, the ringside doctor waved off the contest. Angela Hill defeated Ariane Carnelossi via TKO (doctor stoppage). This was Hill’s second win in five months. Ariane Carnelossi will need to return to the drawing board before she secures her first UFC victory.

Some would also argue the circumstances of his debut were far from ideal. Nam took this bout on a few weeks-notice after Alex Perez pulled out of the fight against Pettis due to injury. Winning a short-notice matchup against a top-ranked UFC fighter at altitude is a lofty goal. However, Nam will likely benefit from stepping up. It would be surprising if the UFC didn’t give him another fight under much more reasonable circumstances. Sergio Pettis should be lauded for accepting a short-notice replacement as well. The decision was of great risk and offered little reward. Sergio Pettis breaks a two-fight losing streak in his return to flyweight.

Paul Craig knocked down and submitted Vinicius Moreira at 3:19 of the first round. Craig told Michael Bisping in his post-fight interview that he was fighting for his contract in this contest. Going into this fight, he was 3-4 in the UFC. Including his latest win at UFC Mexico, every single one of Paul Craig’s UFC fights has ended via finish. Combine that fact with his last fight being a win, and he’s likely to be kept by the UFC. Vinicius Moreira is now 0-3 in the UFC since earning his contract on Dana White’s Contender Series Brazil.

Sijara Eubanks took on Bethe Correira in her second UFC bantamweight fight. Eubanks was quite dominant in the first round. She was so effective, she nearly finished Correira. Though momentum was on her side going into the second round, Eubanks was completely outstruck over the course of the next two rounds. Bethe Correira defeated Sijara Eubanks via unanimous decision.  She snaps a two-fight losing streak with the victory. Sijara Eubanks falls to 0-2 at bantamweight.

One of two Peruvians on the preliminary UFC Fight Night 159 card, Claudio Puelles would be aiming to get his second UFC victory. Marcos Mariano would be aiming to rebound after losing his debut to the always-dangerous Lando Vannata. Unfortunate for Mariano, Claudio Puelles won a fairly one-sided fight via unanimous decision. Mariano is now 0-2 in the UFC. Puelles improves to 2-1 with the promotion.