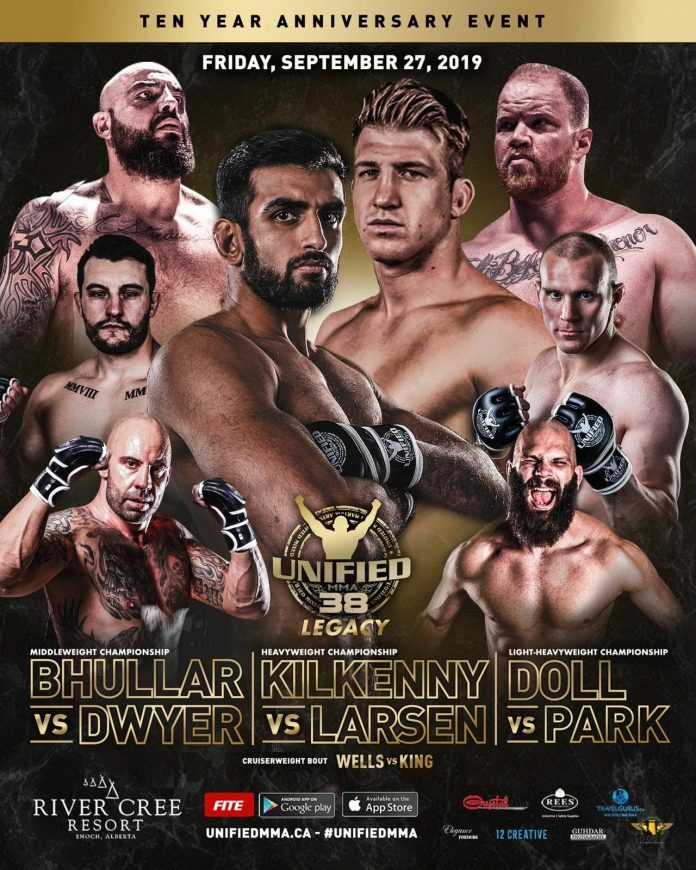 Unified MMA will set up shop in Edmonton for their special 10th Anniversary Event, Unified MMA 38. You can catch the Unified MMA 38 live results here as they happen. The main event features a clash for the Middleweight Tittle between Matt Dwyer and KB Bhullar. Matt Dwyer was once in the UFC and is attempting to get back there and KB Bhullar is an undefeated Canadian who had stopped six of seven opponents in the first round. We will bring you full Unified MMA 38 results all night long.

There are a total of three titles on the line as Graham Park and Sheldon Doll will meet for the Light Heavyweight title as well. Graham Park is 6-2 and enters this championship match on a three-fight winning streak. He’ll face Sheldon Doll who sports a 7-3 record and has won five consecutive fights.

The heavyweight title will also be on the line with Chris Larsen meets Jared Kilkenny in a highly anticipated clash. Chris Larsen is 4-1 with his lone defeat coming at the hands of Jared Kilkenny at Unified MMA 31 via KO. He’ll look to exact revenge and put a belt around his waist tonight. Jared Kilkenny is 13-11 as a professional and 2-2 in his last four. He’s six foot five and weighs in just under the 265-pound limit. Expect fireworks.

Mitch Wiles def. Lorin Motruk via TKO (Strikes) at 2:38 of Round 1.
Robert Kovacevic def. Konstantin Zaitsau via Majority Decision.
Laine Foxton def. James Ricks via Submission (Triangle Choke) at 2:16 of Round 3.
Tyrell Giselbrecht def. Alexander Krutskykh via Submission (Armbar) at 2:08 of Round 1.