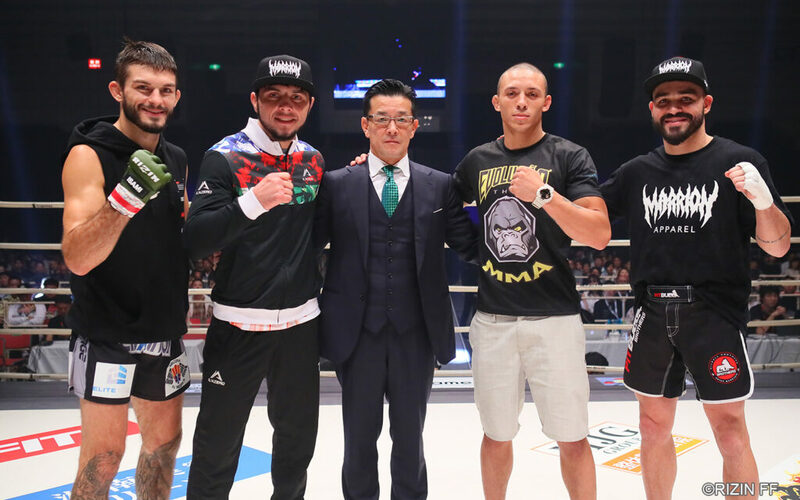 Not only was there a storm outside Osaka Edion Arena, but there was a tidal wave of finishes inside for RIZIN 19. In the much talked about RIZIN lightweight Grand Prix, the following fighters advanced: Tofiq Musayev, Luiz Gustavo, Patricky “Pitbull” Freire, and Johnny Case. All GP matches were a first-round TKO finish. To see the full results of RIZIN 19 you can go here. 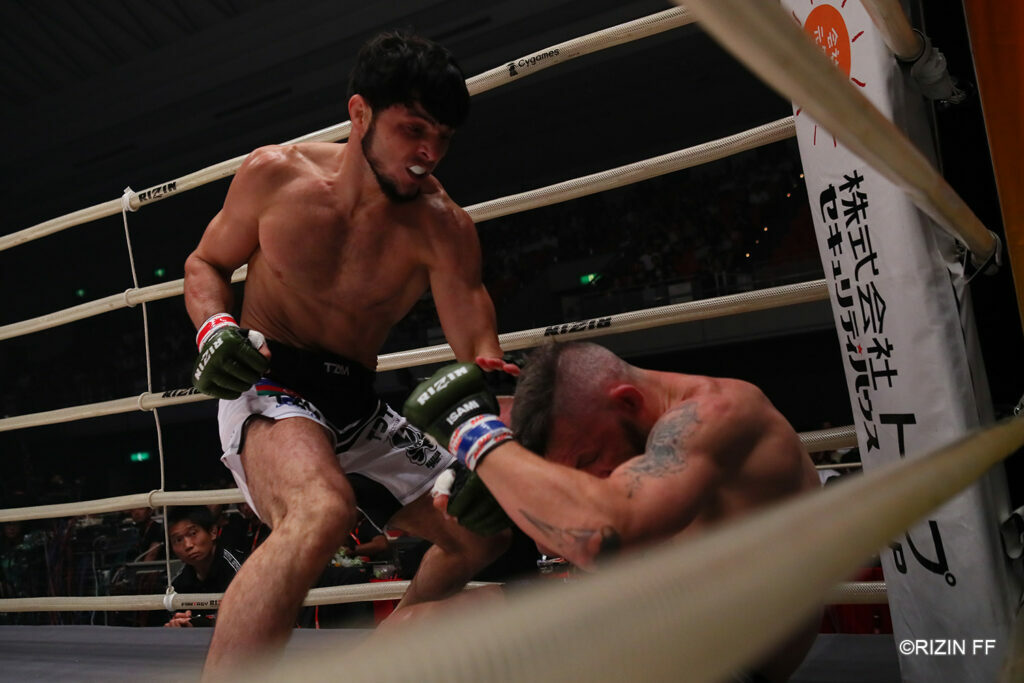 Tofiq Musyaev outstruck Damien Brown on the feet and got the TKO victory at RIZIN 19. Photo courtesy of RIZIN FF.

Azerbaijan’s Tofiq Musayev (16-3) made an example of Damien Brown (19-13) lighting up the Australian fighter with hard kicks to the body and a head kick that sent him reeling. Musayev swarmed Brown with punches and the fight was stopped in the first round. 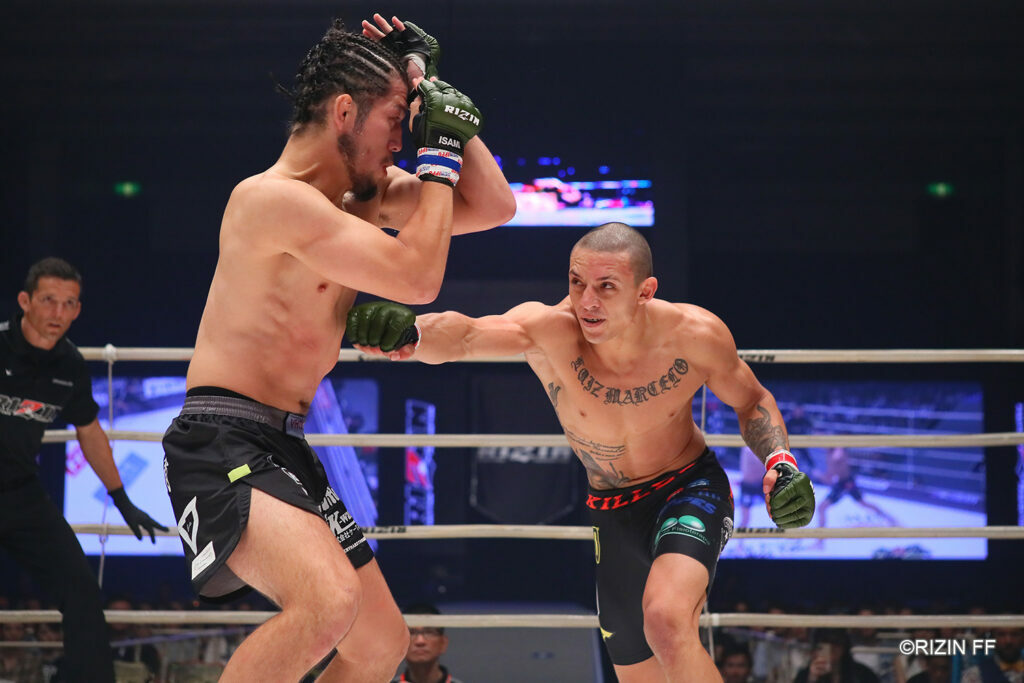 A fight that a lot of people didn’t think would go past the first round turned out to be exactly that. Luiz Gustavo (10-1) caught Hiroto Uesako (16-8) with a right hand that split his eye open badly. Uesako managed to recover briefly before referee Jason Herzog called a time out. The doctor took a look at Uesako’s eye and stopped the fight. This is Gustavo’s 10th win and 10th finish. None of his wins have gone to the third round. 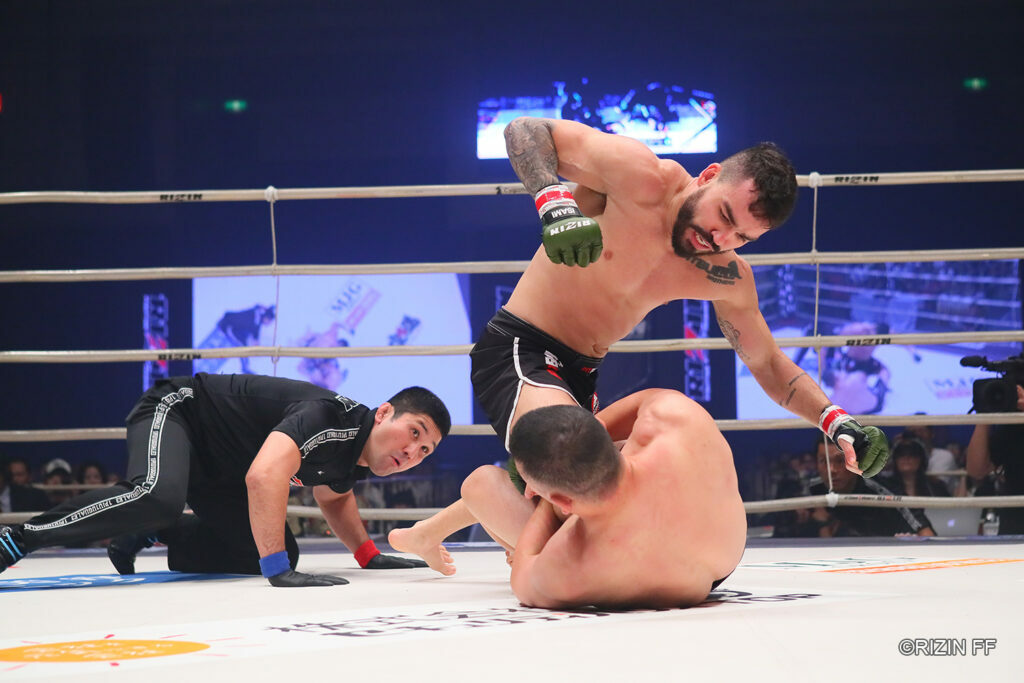 The Bellator representative in the tournament Patricky “Pitbull” Freire (22-8) did his home promotion proud by making quick work of Tatsuya Kawajiri (37-14). At one minute and ten seconds in the first round, Pitbull hit Kawajiri with a flying knee. A visibly rocked Kawajiri grabbed onto Pitbull’s leg where he continued to lay punches on him until the referee stepped in to end the fight. 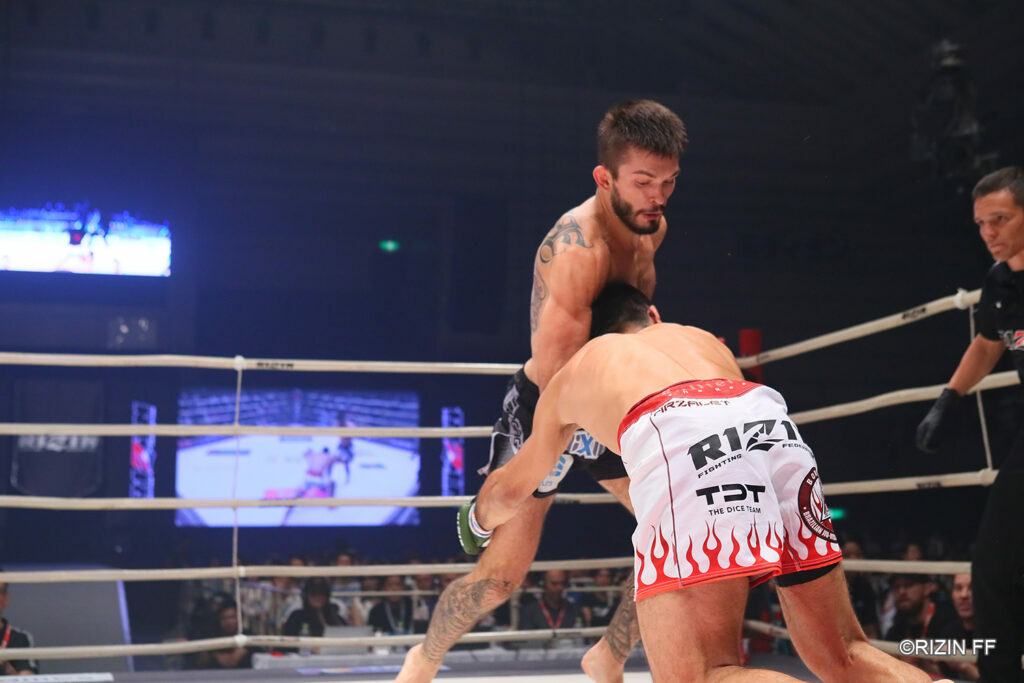 Jiu-jitsu couldn’t save Roberto de Souza as he tapped to an uppercut and soccer kick Johnny Case laid upon him. Photo courtesy of RIZIN FF.

In one of the most anticipated fights of the night, Johnny Case (27-6) made easy work of the only undefeated fighter in the bracket Roberto de Souza (9-1). The Brazilian tried to bait Case into grappling and tried for a triangle and omoplata, both of which he escaped. De Souza tried for another takedown and Case hit him with an uppercut to the eye. De Souza fell to the ground holding his eye and tapped on the ring mat just as Case gave a soccer kick to his head.

The semi-final matches are as follows: 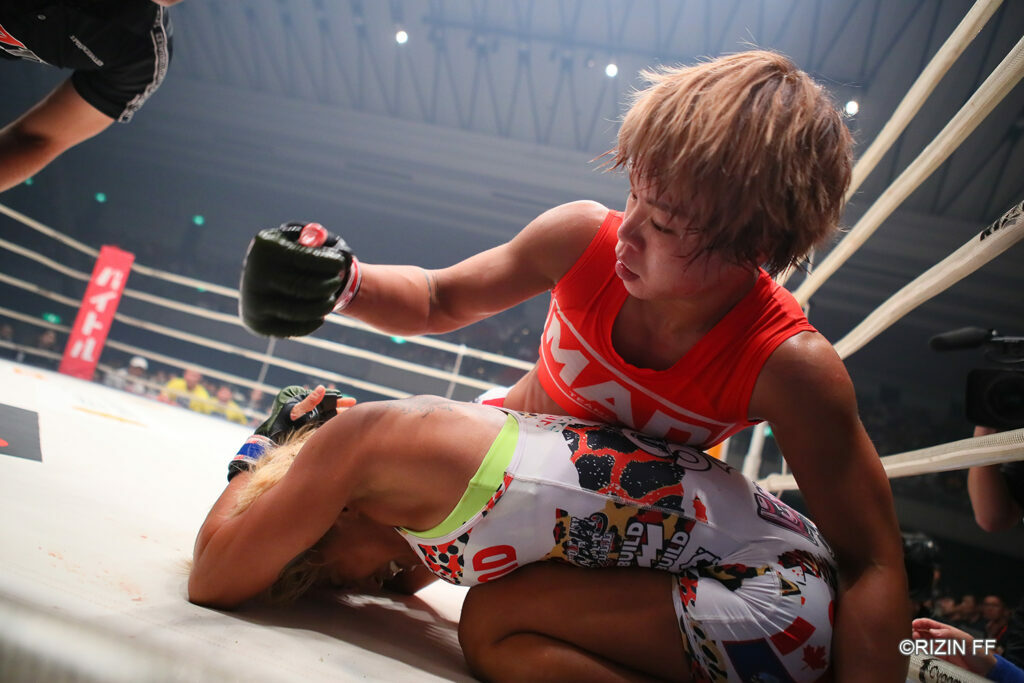 RIZIN super atomweight champion Ayaka Hamasaki has her first title defense lined up. Road FC atomweight champion Seo Hee Ham (22-8) defeated Miyuu Yamamoto (5-4) by second-round TKO to earn the number one contender spot. Yamamoto tried for a takedown, but Ham sprawled and blocked it. The Krazy Bee figther held onto Ham’s leg as Ham pounded her head with hammerfists until the referee called off the match. Ham and Hamasaki have fought twice previously outside RIZIN with Hamasaki winning both times. The fight will most likely take place at the RIZIN New Year’s Eve show. 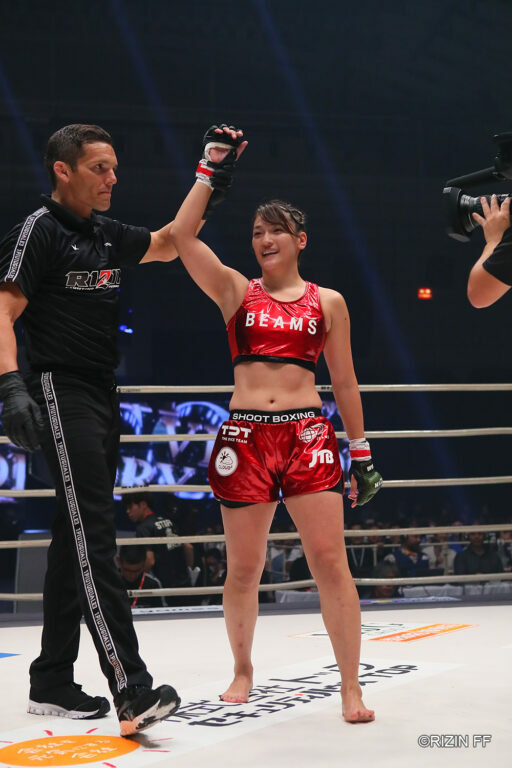 Rena Kubota got a 20-second win in her hometown of Osaka. Photo courtesy of RIZIN FF.

Osaka native Rena Kubota (9-4) returned to her hometown to get the quickest win on the RIZIN 19 show. At 20 seconds she finished Alexandra Alvare (0-3) from Spain. As the round began, Kubota started immediately hitting Alvare with combination rights and lefts. Alvare tried to run away, but Rena chased her into the corner where she finished off her opponent with strikes.

If you want to see the replay of the show, you can order at FITE.TV.