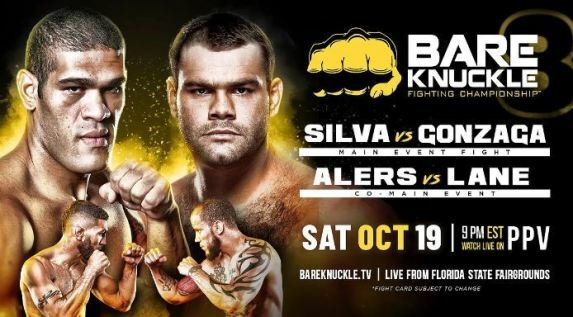 Saturday night Bare Knuckle FC 8 will take place in Tampa, FL. The event features a heavyweight main event featuring two former UFC mainstays Antonio Silva will meet Gabriel Gonzaga. It’ll be the first foray into the world of Bare Knuckle boxing for the two. This is the eighth event from BKFC which helps answer a question posed earlier this year in an article about the fledgling spot.

The two big fellas will toe the line and slug it out in the main event of this exciting event. It should be an interesting clash between Silva, who has always enjoyed a good brawl and Gonzaga who has more of a grappling background.

Silva has dropped eight of his last nine fights, and more troubling than that is his rate of being finished. “Bigfoot” has been stopped via strikes in seven of his past eight bouts. That’s an alarming amount of damage to have taken. So it makes one naturally wonder if Bare Knuckle boxing is a logical step in his progression as a fighter.

Gonzaga is known primarily for his grappling skills, but he can stand and bang when the situation calls for it. That said, he hasn’t won a fight via his striking since 2013 when he stopped Shawn Jordan back at UFC 166.

I would make Silva a favorite in this fight, and knowing their suspect chins, it’s a safe bet the judges can take this fight off. Silva wins this fight inside of the distance by TKO.

Julian Lane has found a promotion that has no problem letting him bang. This will be his third fight in the promotion and he’s currently 1-1. He has shown good form with his boxing and head movement and this is a big fight for him in terms of his stance within the promotion. Jim Alers is also stepping into the BKFC ring for the third time. He’s coming off of a stoppage victory over Leonard Garcia.

This is going to be a good fight. Both guys need to win and they seem somewhat evenly matched. If I had to pick a winner, I’d lean towards Alers, but this is a coinflip and it should be fireworks. This fight alone is worth the price of admission.

This fight features two newcomers to the world of bare-knuckle FC. Reggie Pena enters this fight on a four-fight winning streak, but three of those came via submission. He won’t have that ability Saturday night. Lorenzo Hunt has lost four of his last six and is also making his bare-knuckle debut. His three professional victories have all come by knockout, so there’s hope for him Saturday night.

I expect this to be an interesting fight, with Hunt more comfortable on his feet. Pena has toughness and durability but he might be outgunned here Saturday night. Expect a good fight with plenty of action. In the end, I expect Lorenzo Hunt to do enough to secure a victory on the scorecards.

Rest of the card with predicted winners.