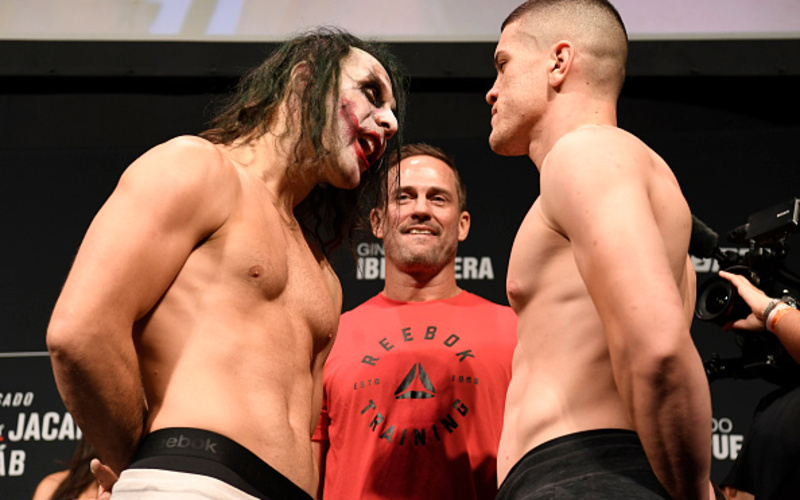 One final card this weekend for our MMASucka staff picks. Later this evening, November 16 will see UFC Fight Night 164 go down from the Ginásio do Ibirapuera in São Paulo, Brazil. Main card action will begin at 8:00pm ET (5:00pm PT) live on ESPN+.

Unfortunately, Bellator 234 staff picks from Thursday were unable to be published due to a miscalculation. However, feel free to see how our staff did with picks this morning at ONE Championship: Age of Dragons.

Light heavyweights Jan Blachowicz and Ronaldo “Jacare” Souza will clash in the main event looking to climb up the ranks for their shot at the 205-pound title. Former KSW light heavyweight champ Blachowicz has seen highs and lows throughout his five-year UFC tenure. He currently sits at 5-1 through his last six dating back to October of 2017, the lone loss coming earlier this year to Thiago Santos. Blachowicz most recently welcomed former middleweight title holder Luke Rockhold to the division with a vicious second round knockout. His opponent, Jacare, is ready to make his divisional debut after a 34-fight career contending at middleweight. The former Strikeforce king has come up short numerous times in the past at receiving a UFC title shot. Now in a new weight class and looking to rebound off a decision loss to Jack Hermansson, soon-to-be 40-year-old Souza hopes to find success in this switch.

Two more light heavyweights make up the co-main event between former UFC light heavyweight champion Mauricio “Shogun” Rua and Paul “Bearjew” Craig. Shogun will look for his second win in the last non-calendar year while Craig hopes to secure a twelfth submission victory to his resume.

Throughout the year, staff picks will be composed of four different MMA promotions: UFC, Bellator, ONE, and RIZIN. Main cards will make up both UFC and Bellator picks, while the biggest fights to make up ONE and RIZIN events will be used. The WINNER of staff picks will have a choice between receiving a championship belt from ProAmBelts or a championship chain from Championship Chains. The 2018 winner was awarded to Michael DeSantis, compiling a record of 202-101.

Check out our MMASucka staff picks for UFC Fight Night 164 below.

*parenthesis indicates results from Bellator 234 fights*
**ONE Championship: Age of Dragons picks will be included NEXT weekend**