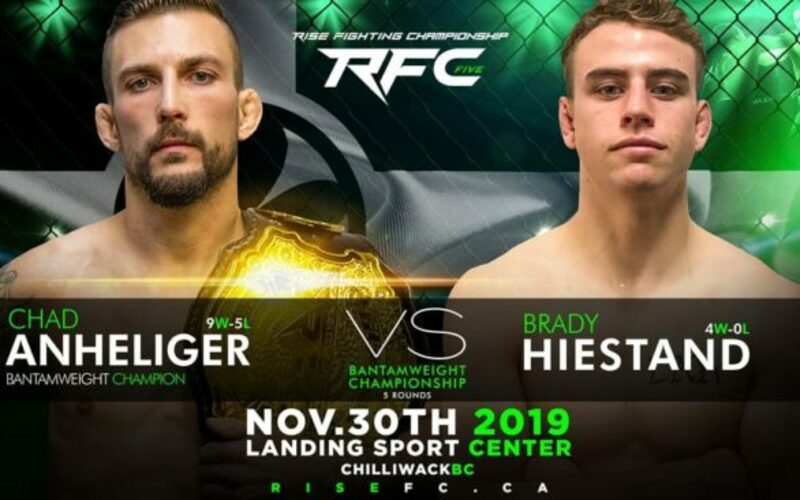 Saturday night will see Rise Fighting Championship back at the Landing Sports Center in Chilliwack, BC and MMASucka is here to bring you Rise FC 5 results from start to finish.

With 3 championship fights on the card fans are gearing up for an electric night of fights. Headlining the card will be current Rise FC bantamweight champion Chad Anheliger making his first title defense against undefeated prospect Brady Hiestand. Anheliger was originally slated to fight Jamie Siraj however a few weeks ago Siraj had to pull out due to injury.

The co-main event will feature a fight for the vacant featherweight title between John Nguyen and Radley Da Silva. Nguyen is 2-0 as a professional with both wins coming from knockouts. Da Silva hasn’t fought since 2013 but he had a unanimous decision win in his last fight. Ring rust could play a factor in this fight since due to Da Silva’s six-year absence, in that time frame Nguyen fought 15 times.

Josh Kwiatkowski returns to the Rise cage as he faces Randy Mahon. Kwiatkowski is 3-2 as a professional, he has won his last two fights including an impressive knockout over Grant Gorsegner at Rise FC 4. Mahon who is 4-5 has been battling several injuries over the past few years has announced that this will likely be his retirement fight.

Rise FC 5 will also have a few amateur fights, including one for the Rise FC amateur lightweight title between Raphael Ouellet and Damon Marlow. This is the third meeting for these fighters. Their first meeting was at Rise FC 2 where Marlow earned a unanimous decision victory. More recently they fought each other at Extreme Fighting Challenge earlier this year, Ouelett won a split decision.

Chad Anheliger def. Brady Hiestand via TKO (Punches) at 0:37 of Round 3

Josh Kwiatkowski def. Randy Mahon via TKO (Punches) at 1:24 of Round 2

Raphael Ouellet def. Damon Marlow via Submission (Armbar) at 2:19 of Round 2

Kieran Davies def. Pola Sahota via Submission (Front Guillotine) at 1:28 of Round 2

Maria Djukic def. Joanne Ready via Knockout at 0:45 of Round 1