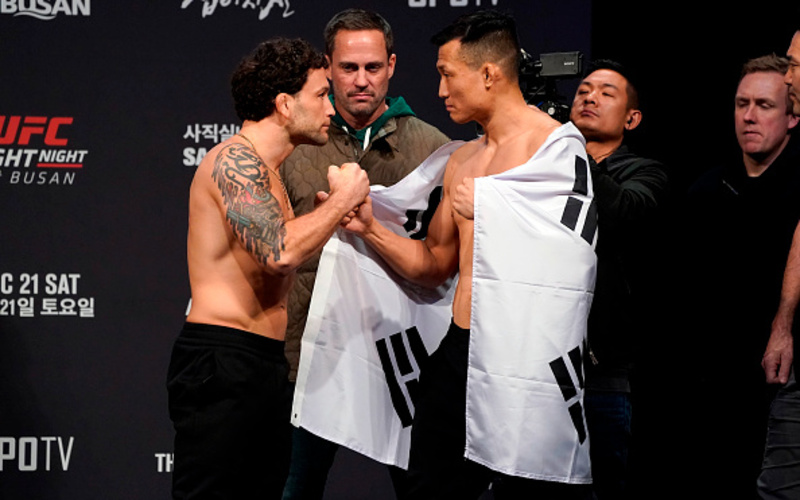 The UFC returns to South Korea for the first time in 2019 for UFC Fight Night 165. In the last UFC event of the year, Frankie Edgar steps in on short notice to face off against “The Korean Zombie” Chan Sung Jung. Before stepping in for the injured Brian Ortega, Edgar was scheduled for his bantamweight debut in January against Cory Sandhagen. The UFC vet will be making his first appearance since his title fight loss to former featherweight champion Max Holloway. He will be facing off against Chan Sung Jung, who is coming off a big win over Renato Moicano. That win came in June at UFC Fight Night 154 as Jung finished Moicano in under a minute. A win for either man could put them in the position to challenge new featherweight champion Alexander Volkanovski for the belt next.

In the co-main event, former UFC light heavyweight title challenger Volkan Oezdemir returns to the octagon. He will be facing Aleksandar Rakic who is coming off a big knockout win over Jimi Manuwa in June. Oezdemir last appeared in the octagon in August when he knocked out Ilir Latifi in the second round. Rakic will be looking for his 12th win in a row while Oezdemir looks to win his second straight after a three fight losing streak.

Before the co-main event, Doo Ho Choi returns to the octagon for the first time since January 2018. He is currently serving his two year mandatory military duty in South Korea, meaning he is only able to fight there. Choi’s last fight took place at UFC Fight Night 124 when he lost to Jeremy Stephens by TKO. He will be taking on Charles Jourdain, who is coming off a loss to Desmond Green at UFC Fight Night 152.

Kicking off the main card will be a fight in the bantamweight division as Kyung Ho Kang takes on Liu Pingyuan. Kang is coming off a split decision win over Brandon Davis while Pingyuan recently lost to Jonathan Matinez by knockout. Next up will be a middleweight bout as Junyong Park takes on Marc-Andre Barriault. Both fighters are coming off recent losses as Park lost to Anthony Hernandez and Barriult to Krzysztof Jotko. Finally, before the return of “The Korean Superboy” will be a light heavyweight fight between Da Un Jung and Mike Rodriguez. Jung is coming off a submission win over Khadis Ibragimov while Rodriguez lost his last fight by unanimous decision to John Allan Arte.

Follow along with MMASucka as we provide you with the results throughout UFC Fight Night 165.