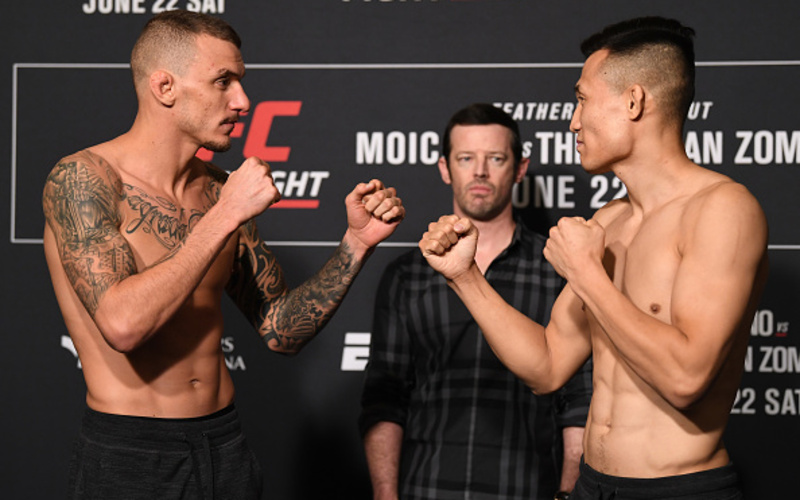 Interestingly, both fighters are coming off of a loss. Moicano’s loss came in February as he was taken out in round two against the greatest featherweight ever, Jose Aldo. Jung’s loss came in the main event of UFC Fight Night 139 last November. He took on Yair Rodriguez that night in what would turn out to be a fight of the year candidate. The fight was moments away from being decided on the judges scorecards. However, Rodriguez was able to end it in the final seconds with a perfectly placed elbow.

In the night’s co-main event, two well known welterweights clash as Bryan Barberena takes on Randy Brown. Barberena’s last fight came in February as he took on Vicente Luque at UFC on ESPN 1. He would lose the fight, as Luque finished him with strikes in the third round. His opponent, Brown, is also coming off a loss in his most recent fight. The fight took place nearly eleven months ago when he took on Niko Price at UFC Fight Night 133. Price would defeat Brown that night in the second round, knocking him out with punches from the bottom.

Kicking off the main card will be in the middleweight division. Dana White’s Contender Series alum, Kevin Holland, enters his second UFC contest as he takes on Italy‘s own, Alessio Di Chirico. The next fight will feature a couple of women in the flyweight division. Riding multi-fight win streaks of their own, Andrea Lee will look to make it six straight by defeating Montana De La Rosa. De La Rosa will be looking to make it five straight wins with a win over Lee, improving to 4-0 in the UFC. Finally, before the co-main event, bantamweights collide as Andre Ewell takes on Anderson dos Santos. Both men are coming off losses as Ewell was submitted by Nathaniel Wood at UFC 232, while dos Santos lost a unanimous decision to Nad Narimani at UFC Fight Night 140, almost two years ago.

Follow along with MMASucka as we provide you with the results throughout UFC Fight Night 154.