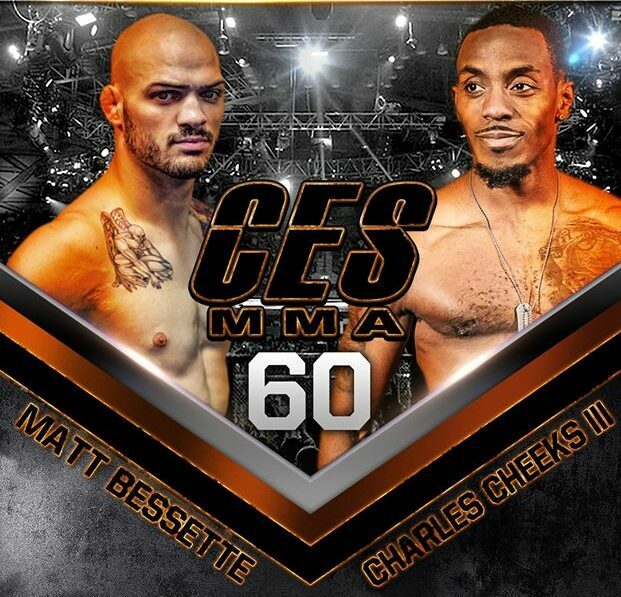 CES 60 is set to go down tomorrow night at the Twin River Casino in Lincoln, RI. The card is pretty interesting and can be seen on Fight Pass Friday at 5 PM PST. The event is being headlined by three title fights and the fifth career fight of John Gotti III. Let’s take a look at what you can expect.

The main card for CES 60 is looking really entertaining and there’s a number of reasons why you should check it out on UFC Fight Pass tomorrow night. If you can’t view it, we’ll have the results as they happen here at MMA Sucka.

This should be a fun fight as both guys have a wealth of talent and experience. Charles Cheeks is 14-7 as a professional and have won three of four heading into this title fight. The belt is currently vacant and the winner of this fight will become the man in CES’ featherweight division. Cheeks brings a solid game into the cage, having good standup and a good ground game.

Matt Bessette is a UFC veteran who will be fighting for the second time since being cut by the UFC. He’s 23-9 as a professional and “The Mangler” has a complete and solid MMA game. He trains with Underdog MMA out of Connecticut alongside Johnny Lopez who is fighting for the Flyweight title on this same card. He lost both of his UFC contests via decision, his last bout for them was a split decision loss. I was surprised to see him released but he’s back on the regional scene in a big title fight and gaining experience.

I think this could be a good fight, but I’m leaning towards Bessette’s experience on the big stage helping him to feel more comfortable in this big fight. It could be a heck of a bout, but in the end, I’m going with “The Mangler” Bessette to win the title.

Greg Rebello has a vast experience advantage over Tebaris Gordon in this fight. Rebello has made the walk to the cage 34 times and has a record of 25-9. He’s twice appeared and lost on the Dana White Contender Series, but in CES he’s won ten in a row heading into this title defense. He beat Travis Wiuff to win the title and defended it in his last outing against Kevin Haley. He’s won three in a row via first-round stoppage in CES.

Tebaris Gordon (3-1) is much less experienced than his opponent but feels confident none the less. He won all three of his pro fights via stoppage, before meeting Greg Hardy in the Dana White Contender Series. In that bout, the man they call, “Boom” was stopped in seventeen seconds. He’ll look to bounce back and land some heavy shots here and try and win the heavyweight championship.

Anytime heavyweights clash, it can be a matter of who lands first. These guys are both really heavy-handed and are capable of ending it with one shot. However, at the end of the day, I think Greg Rebello’s experience edge will pay off and he will find a way to win the fight and defend his title.

Johnny Lopez has a pro record of 12-4 and has won four consecutive fights heading into this title bout. In his last outing, he defeated Dan Cormier (Not that Dan Cormier) at Bellator 232. He’s fast on his feet and has good wrestling and submissions. He’s a complete fighter and has a good chance to put gold around his waist Friday night.

Blaine Shutt has a record of 7-4 but has lost two of three and is making his promotional debut. It makes one wonder how “The Shutdown” earned a title shot entering a new promotion off of a loss, but that’s the situation he finds himself in. The majority of his wins come via submission so you can expect to see some entertaining grappling in this contest.

I think we’ll see some great exchanges on the mat here. When it’s all said and done, however, I expect Johnny Lopez to defeat Baine Shutt and become the CES flyweight champion. If I had to bet I’d say it goes the distance.

I don’t know much about either of these two fighters to put it all on front street. When I did some research for this, it looks to me like Richie Santiago is a submission specialist. I caught his fight on the Dana White Contender Series, where he was defeated by Miles Johns.

Giorgi Kudukhashvili is 5-3 and has gone loss, win, loss, win in his last four outings. If you believe in the power of patterns he’s going to lose on Friday night. That said, he is coming off of a first-round knockout victory at Maverick MMA in November. He has decent striking but also possesses a decent grappling game. Not as good as Santiago’s though, so it can be expected he’ll try and keep things standing. If he’s able to do so, he could find success.

John Gotti has made a name for himself inside the cage at CES. He’s 4-0 with four first-round stoppages. He’s got heavy hands and when he hits you, it hurts you. He last fought at CES 56 and needed only 96 seconds to dispatch his opponent via a vicious knockout. He steps up in competition this time out so it will be interesting to gauge where his abilities are when he faces Marcos Lloreda.

Lloreda has won four of his last five fights and will be looking to test Gotti III in this fight. The two were scheduled to meet at CES 59 but Gotti had to pull out of the fight with an eye injury. Lloreda stayed on the card and defeated Sanad Armouti via unanimous decision. Now the two will meet Friday night.

I like Gotti, I mean, he has a fun style to watch and he has accurate heavy hands. I think this fight will be potentially the most difficult of his young career, but I see him winning via TKO possibly in the 2nd or 3rd round.

William Knight is 6-1 and the guy loves to throw hands. He is, however, coming off of his lone loss, so it’ll be interesting to see how he is able to bounce back. All six of his career victories have come by way of stoppage.

Rocky Edwards is 2-2 in his last four fights and sports a lackluster 12-9 record overall. He enters this fight on the heels of an Armbar victory in his last outing for MMAX FC. If he is going to get this fight to the canvas he’ll have to survive on his feet in the early going. His best chance for victory comes via grappling.

I think this has the potential to be another good fight. It might not last long, however. In the end, I anticipate Knight landing some big blows standing and adding another stoppage victory his record.

Marisa Messer-Belenchia is 3-1 heading into this fight against Delaney Owen. She’s fought for CES before and is coming off of a loss in her last bout for Invicta FC. She was defeated via decision by Linda Mihalec. She has experience in professional boxing as well and will be looking to stand and deliver the damage Friday night.

Delaney Owen is 3-2 and also lost her last MMA bout under the Invicta umbrella. She won her last fight overall, in a bare-knuckle boxing tilt with Sheena Brandenberg. Much like Messer-Belenchia, she likes to strike. That should make for a compelling contest.

I think both fighters are talented and this will be a solid fight to kick off the main card. Owen has three submission victories to go with her boxing skills and in the end, I feel she might have more ways to win. I’m going to lean towards Owen for that reason.