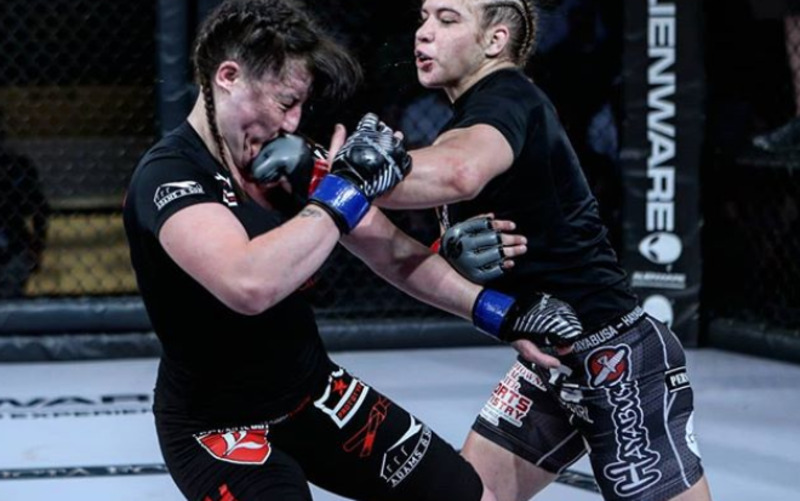 Miranda Maverick takes on Pearl Gonzalez at Invicta FC 39. Maverick vs Gonzalez goes on Friday, February 7th at 8:00 pm EST. It’s the co-main event fight and is a title eliminator at flyweight. Obviously this bout has high stakes for the future of the Invicta 125lb ranks through 2020 and beyond. The live event emanates from Memorial Hall in Kansas City, Kansas and will broadcast live on UFC Fight Pass.

Miranda Maverick’s pre-fight preparations are rooted in unwavering discipline and structure throughout each day. Maverick said, “Generally early in the morning after I wake up and as soon as I get to work where I coach, I usually do about a 5 k run…I coach throughout the day. I usually go to school in the afternoons.”

Maverick trains with a lot of ’35 and ’45 male competitors to get in the necessary work that she needs. While also being a pro fighter, Maverick concurrently coaches people in martial arts. Maverick quipped, “You get to where you focus on details a lot more. You understand little parts of something that make a big difference. Even footwork when you’re teaching other people.”

There’s the notion of the winged serpent in Jiu-Jitsu which is somebody who has unassailably clean technique but also has tremendous physical strength. A confluence that Maverick has had long through her carer.

Maverick remarked, “I don’t know if I ever thought the strength was a negative thing. I just thought it was negative that nobody else saw beyond the strength. Even when I started MMA, I was already a blue belt. Thought my technique was very good for a female of that level and people were always crediting it to strength.”

Maverick’s stock has never been higher as she’s on the heels of her Phoenix Rising 2 victory. She finished three opponents in a single night with the two final victories coming by way of rear-naked choke.

Maverick stated, “It makes the single competition seem a lot easier, I’ll say that. Because those tournaments are very stressful on your body, on your mind. There’s so much to keep an eye on and everything. That tournament I kind of learned to control my emotions a little bit more and had to look at each fight as if it was a round.”

Even beyond the physical benefits of overcoming such adversity, Maverick took a lot more from that tournament experience. Maverick said, “Also just in the confidence aspect of things. I went in there and beat some of the top flyweights in the world in my opinion. So to go in there against Pearl, I think it’s just going to be another night for me.”

Avenging a previous loss to Deanna Bennett in the Phoenix Rising 2 tournament added an extra layer of significance to the night and the story could not have unfurled better.

Maverick quipped, “That’s the fight I wanted and I ended up getting it. I even asked in the beginning…Deanna Bennett’s the only one I really wanna fight. But I don’t want to fight her in either one of the two preliminary bouts. I want to fight her in the finals. I was lucky enough that that happened.”

Bu Maverick’s next test is a stiff one in the form of UFC veteran/ Invicta FC title challenger Pearl Gonzalez. Maverick remarked, “I think she’s well rounded. I think she’s good in all aspects. I just don’t think she’s great in any aspect from what I see from her.”

It was previously mentioned that this bout is a number one contender’s matchup but there’s not one hundred percent certainty that a title bout is next for Miranda Maverick.

Maverick stated, “Honestly after the tournament win, I thought I was going to have a title shot next. So it looks like I’ll have to just prove myself again. For me, I’m hoping I can even move past Invicta before that title even becomes an option. Whether it be Contender Series or the actual UFC itself. If not, I’m ready for Porto.”

Maverick also has a love for pencil sketching. Art of the Maverick is her imprint that she operates under. This has been kind of put on the backburner with school and fight prep understandably taking up the bulk of her time. Maverick will look to illustrate a different kind of masterpiece on a different set of canvas when she steps in the cage with Pearl Gonzalez in the Invicta FC 39 co-main event feature.