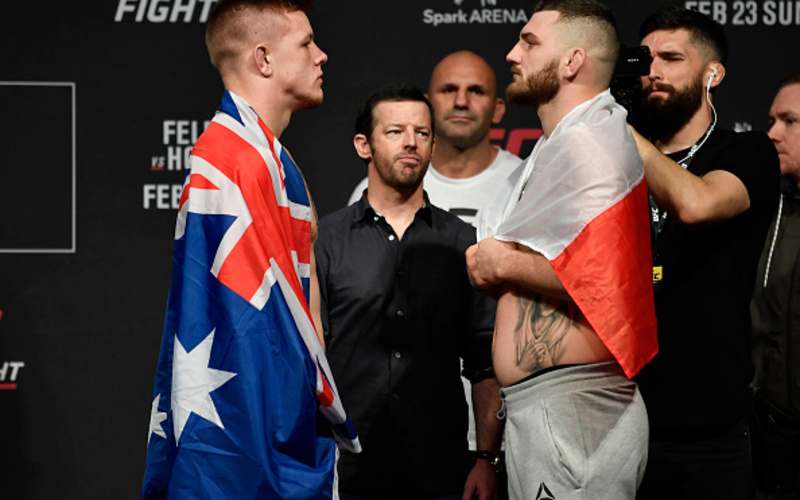 The UFC heads to Auckland, New Zealand to bring you UFC Fight Night 168 from the Spark Arena. Headline by Paul Felder taking on City Kickboxing fighter Dan Hooker in the main event. The co-main event will Jimmy Crute stepping into the cage against Michal Oleksiejczuk. Other notable names on this card include Kai Kara-France, Brad Riddell, Zubaira Tukhugov and Karoline Kowalkiewicz.

Paul Felder has been involved in some exciting fights during his career in the UFC and this next matchup against Dan Hooker could top that list. Felder is coming off a split decision victory over Edson Barbosa at UFC 242. Previous to that he earned a unanimous decision win over James Vick. Riding that two-fight winning streak right into New Zealand Felder will be ready for a war in hopes of moving up the UFC’s lightweight rankings.

Hooker is also riding a two-fight winning streak heading into this fight. His last fight was at UFC 243 where he earned a unanimous decision win over Al Iaquinta. A win over Felder could potentially move Hooker into the top five in the lightweight rankings. That could set him up with a big name fight later on in the year.

This fight should have all the fireworks. Both fighters have an impressive ten knockout wins in their careers and a win for either of them could mean big things in the future.

Follow along with MMASucka as we bring you UFC Fight Night 168 results all night long.

Jimmy Crute def. Michal Oleksiejczuk via Submission (Kimura) at 3:29 of Round 1

Marcos Rogerio de Lima def. Ben Sosoli via TKO (Punches) at 1:28 of Round 1

Zubaira Tukhugov def. Kevin Aguilar via TKO (Punches) at 3:21 of Round 1

Jalin Turner def. Joshua Culibao via TKO (Punches) at 3:01 of Round 2

Song Kenan def. Callan Potter via Knockout (Punches) at 2:20 of Round 1

Priscila Cachoeira def. Shana Dobson via Knockout (Punches) at 0:40 of Round 1