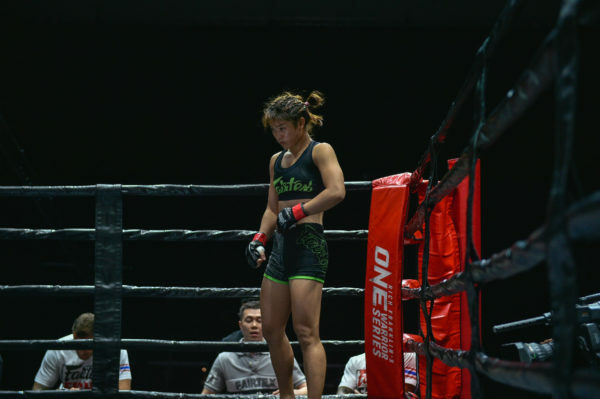 On Friday, February 28th, ONE Championship returns to the Singapore Indoor Stadium for ONE: KING OF THE JUNGLE.

The five-bout main card is stack with fun, and it will not be something you will want to miss. Let’s break down each bout and get primed for the bouts coming from Singapore.

You won’t want to miss a second of the action. Learn how to watch the main card action from Singapore in your area.

Stamp Fairtex and Janet “JT” Todd previously met last February, and Stamp took home the ONE Atomweight Muay Thai World Title. Now, Stamp and Todd are set to run it back under kickboxing rules in the ONE: KING OF THE JUNGLE main event.

The fun-loving Fairtex Gym representative showcases her fun-loving personality with the Stamp Dance before every bout, but when the bell sounds, she has shown to be the best striker in the world as she speeds toward history. Already a two-sport World Champion, the Thai star has her sights set on Angela Lee and the ONE Atomweight World Title with a perfect 4-0 mixed martial arts record. But to continue her bid to hold three titles simultaneously, she must overcome her familiar foe.

After the loss to Stamp, Todd reeled off three consecutive victories, including two knockout performances. The perseverance of the American has led her to the rematch and another crack at ONE Championship gold.

Will Todd derail the bullet train that is Stamp Fairtex, or will her bid at history get another step closer with a title defense? That question will be answered at the Singapore Indoor Stadium through five rounds of amazing kickboxing action.

In the co-main event, the inaugural ONE Strawweight Muay Thai World Championship will be on the line between a living legend and a young upstart looking to shock the world.

Sam-A Gaiyanghadao is the former ONE Flyweight Muay Thai World Champion and the reigning ONE Super Series Strawweight Kickboxing World Champion. Now, he tries to make history by claiming his third different ONE World Title. The Thai legend has had over 400 professional bouts and remains one of the benchmarks for strikers around the world.

But Aussie Rocky Ogden will step up in the hopes of beginning a new era with youthful exuberance. Under the tutelage of John Wayne Parr, Ogden will go all-out in a bid to excite the worldwide audience and bring ONE Championship gold back to Australia.

It will be old school vs. new school in a bid to make history as the first-ever ONE Strawweight Muay Thai World Champion.

Singapore’s Amir Khan got himself back in the win column last November, and now the Evolve MMA will try to start his next winning streak, but submission stylist Kimihiro Eto will try to grab his fourth victory in his last five outings.

Khan has seen his all-around game improve at Evolve MMA, but his power remains one of his key assets. The Singaporean has had eight knockout performances under the ONE banner, which is an organizational record.

Where Khan has the advantage on the feet, Eto has the edge on the canvas. He has finished four of his last five wins by way of arm-triangle choke, showcasing his mastery of the technique. This striker vs. grappler match-up will help set the tone for the lightweight division in 2020.

Friday features the return of one of the sport’s most charismatic stars when “Sexy Yama” steps back on the canvas in active competition against Egyptian Mohamed “The Shark” Sherif.

Yoshihiro Akiyama will attempt to pick up his first victory in ONE Championship as Sherif seeks a career-defining upset over a legend. The Egyptian sports a perfect 100% finishing rate, but Akiyama’s finishing talents are not far behind at 86% with five knockouts and seven submissions.

This match-up is sure to end before the judges have to tally up their scorecards, which makes it a must-see affair.

Kicking off the main card will be a strawweight title eliminator featuring Tiffany “No Chill” Teo and Ayaka Miura. The ONE Strawweight World Champion, Xiong Jing Nan, will have a watchful eye on the start to ONE: KING OF THE JUNGLE.

Teo came up short in her first bid against Xiong, but she returned in form against Michelle Nicolini, but to earn the title shot, she’ll have to throw cold water on the hot streaking Miura. The Japanese strawweight is on a six-bout win streak and began her ONE career in 2019 with three straight submission finishes.

Miura will be going into hostile territory against Singapore’s own Teo. With a title shot on the line, the main card gets underway with championship aspirations for two of the brightest strawweight warriors.