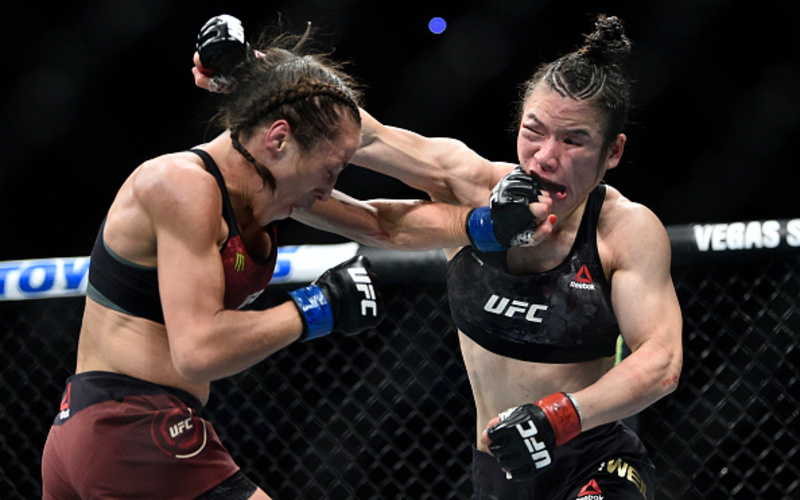 UFC 248 has officially concluded. We saw two title fights, multiple finishes, and a few intense battles. Join us as we break down the main card fight-by-fight!

A title challenger coming off two losses doesn’t make any sense at face value. But there were additional details behind this matchup that made it make sense.

Firstly, Israel Adesanya requested a fight against Yoel Romero. Adesanya claimed that Romero meant a great deal to his legacy, and he wanted to get that victory before the 42-year-old could slow down and retire. Secondly, Adesanya didn’t request this fight while the clear number one contender stood ready for combat. Paulo Costa was unequivocally next in line, but he suffered from a torn bicep. Due to the injury, Costa was deemed unfit to compete. Thirdly, Romero’s two losses were extremely competitive. The scores for the fights faced a great deal of scrutiny in the court of public opinion. So while the contests were technically considered losses, they were debatable and decided by the narrowest of margins. In many eyes, Romero could have been considered the champion already.

Israel Adesanya walked out from backstage with two women, one on each side of him, throwing rose petals at his feet. Before Adesanya stepped out to be seen by the crowd, the women threw the roses in the air above him and left him to make the final walk. Though Israel Adesanya delivered another entertaining walkout, his fight against Romero failed to deliver the same thrill.

Yoel Romero fought with a familiar game plan to stalk his opponent and explode periodically. This was to be expected by anybody familiar with Romero. What surprised many people was the fact that Israel Adesanya wasn’t overly active. He threw very few strikes and was quite tentative throughout the full 25 minutes. Adesanya landed leg kicks from the outside while Yoel periodically got in and landed big shots. Romero shot for a couple of takedowns throughout the contest, but Adesanya was able to get back up instantly both times. The fight was so close, that many questioned who the winner would be after the final horn sounded. The bout was contested on the feet about 95% of the time. Adesanya out-landed Romero in four of the five rounds. Taking these details into account, the judges all agreed that Israel Adesanya was the rightful victor.

Though his first successful title defense was surely a relief for Adesanya, he was showered with boos by fans in the T-Mobile Arena. Viewers also took to social media and lambasted Adesanya’s performance. Though he may not have curried much favor with fight fans, Adesanya went 25 minutes with one of the most dangerous middleweights available. His wrestling defense held up, and so did his chin. After going to war with Kelvin Gastelum and looking like he won the interim belt against a hive of bees, I think it’s fair to give Adesanya some leeway for fighting cautiously against a powerful super athlete in Romero. After all, he’s had performance bonuses in six of his eight UFC fights. ‘Boring’ isn’t something he does often.

The first Chinese UFC champion had a tough challenge in her first title defense at UFC 248. Weili Zhang would be competing against the most dominant UFC strawweight champion to date, Joanna Jedrzejczyk. The fierce Polish striker had a razor-thin decision loss in her rematch against Rose Namajunas and another decision loss against the unstoppable flyweight champion, Valentina Shevchenko. However, she recently had dominant victories over Michelle Waterson and Tecia Torres. Zhang came into this scrap on a 20-fight winning streak, with four of those wins in the UFC. Her most dominant victory was in her title fight against Jessica Andrade. Though the champion was known to manhandle most of her previous opponents, Zhang obliterated Andrade with her own blend of technique and aggression in all of 42 seconds.

If Israel Adesanya vs Yoel Romero was the least exciting fight at UFC 248, Weili Zhang vs Joanna Jedrzejczyk was the polar opposite.  It’s hard to articulate everything that happened in this fight. To simply sum it up, these two women went to war. They both had plenty of their own moments in the bout. In fact, every second of the contest seemed to either be a moment for Zhang or Jedrzejczyk.

They were constantly landing strikes on each other and the damage was adding up. Weili Zhang was bleeding from her nose, her lead leg was visibly damaged, and her face was completely marked up. Joanna Jedrzejczyk had a large hematoma across her entire forehead that nearly made her unrecognizable. Over the course of five rounds, Jezrzejczyk landed an unofficial total of 196 strikes, while Zhang landed 170. With how close this back-and-forth war was, it was no surprise to see the bout go to a split-decision. Each judge scored the bout 48-47, with two scoring the bout for the champion. Weili Zhang defeated Joanna Jedrzejczyk via split-decision.

Though it feels like these hyperbolic statements are made after every event, Weili Zhang vs Joanna Jedrzejczyk is arguably the greatest women’s title fight in UFC history. It was wildly entertaining, extremely competitive, and technically impressive. Weili Zhang is said to be a star in China. After a hard-fought victory and a win over the most dominant UFC female strawweight champion we’ve ever seen, her stardom has likely grown ten-fold. With the Corona Virus being at the forefront of news in China, a victory for their UFC champion must be a most welcome headline. Nobody will forget Weili Zhang’s name anytime soon.

Not too long ago, there was talk of Beneil Dariush retiring. He had problems with his neck and it was beginning to hinder his ability to compete as a professional mixed martial artist. However, those days seem to be behind Dariush. In fact, he claims to feel better than ever. His three-fight winning streak would seem to attest to this. However, Drakkar Klose didn’t seem very concerned with the recent string of victories. Klose described Dariush as chinny, slow on the feet, and flat-footed. He also felt Dariush took the easy way out when he pulled out of their first booking. Though he claimed it was all water under the bridge, Klose still had plenty of negative things to say about Dariush in the lead-up to UFC 248.

Talk is Over. Time to Fight.

Klose was aiming to end the fight right when it began. Both combatants were exchanging punches and Klose was winging bombs. Dariush slowed things down when he tied up Klose and took his back. He held onto a body triangle while Klose stood leaning against the fence for several minutes. Dariush fought for the rear-naked choke but Klose was able to survive until the end of the round. After holding himself up with a body triangle and unsuccessfully fighting for the choke, the question had to be asked–how tired would Dariush’s legs and arms be going into the second round?

Klose knew his opponent would be severely limited after the failed submission attempts in the first. Like he had done early in the previous round, Klose went in for the kill to begin the second. He rattled Dariush and appeared to be on the verge of a KO victory. But Dariush returned fire and wobbled his opponent. Both men threw heavy punches, but only one would survive the back-and-forth onslaught. Beneil Dariush defeated Drakkar Klose via KO in the second round. He becomes the first fighter to finish Drakkar Klose.

Like the strawweight champion had done in the co-main event, Li Jingliang went into UFC 248 representing the nation of China. He was no stranger to doing this. Jingliang came into this bout at 9-3 in the UFC. His opponent would be the returning USADA survivor Neil Magny. Though Magny spent 16 months inactive due to his problems with USADA, (problems that were no fault of his own) he had a tough matchup in his return to active competition.

Early in the first round, Li Jingliang landed a heavy right hand that nearly took Neal Magny’s legs out from under him. Magny was able to quickly tie up Jingliang and recover from the impact. From then on, Magny wore on Jingliang. Magny implemented volume and pressure to slowly dismantle his opponent. Though Magny was the underdog coming into this fight, he was no stranger to disproving the oddsmakers. In fact, before facing Jingliang, Magny had eight wins as a betting underdog in the UFC. By the end of the fight, he made it nine. Neal Magny defeated Li Jingliang via unanimous decision. In his post-fight Octagon interview, Magny called out Michael Chiesa. It wasn’t long before Chiesa took to Twitter and publicly accepted the challenge.

Though he always brings excitement to the octagon, Alex Oliveira was likely fighting for his job at UFC 248. The reason being, he came into this bout on a three-fight losing streak. Max Griffin was also in a bit of a rough patch. He had lost three of his last four and desperately needed a win. Though the terms weren’t formally expressed, it could be argued that this was a loser leaves town fight.

In the first round, Max Griffin was in full control. He landed heavy shots and dictated everywhere the fight went. The second round would swing into Oliveira’s favor. Oliveira landed a right uppercut to the right eye of Max Griffin and left a gash to prove it. He threw heavy leg kicks and opened a second cut under Griffin’s left eye before the second round was over. Griffin’s face was covered in so much blood, that the fight was briefly halted so a doctor could review the damage.

The third round was important. Barring any terrible judging, it would undoubtedly be the deciding round. Surprisingly, Oliveira took Griffin to the ground in the third. But after some time was spent on the bottom, Max Griffin reversed the position and ended up on top! Griffin’s leaking head was now a weapon as the blood was dripping onto Oliveira’s face. Though the reversal was big, it wasn’t enough to steal the round. Alex Oliveira defeated Max Griffin via split-decision. 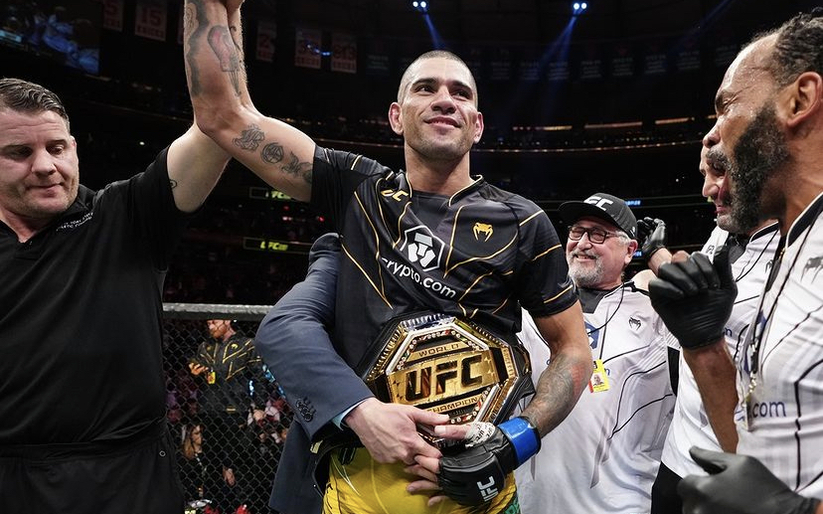 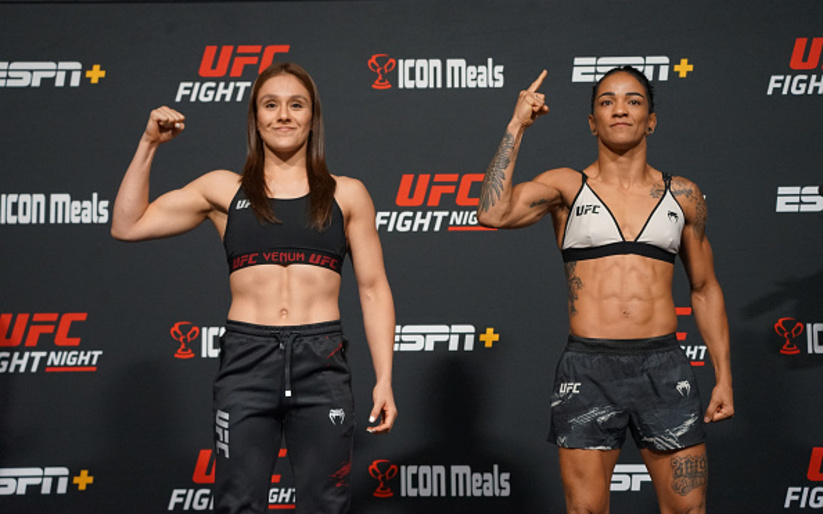 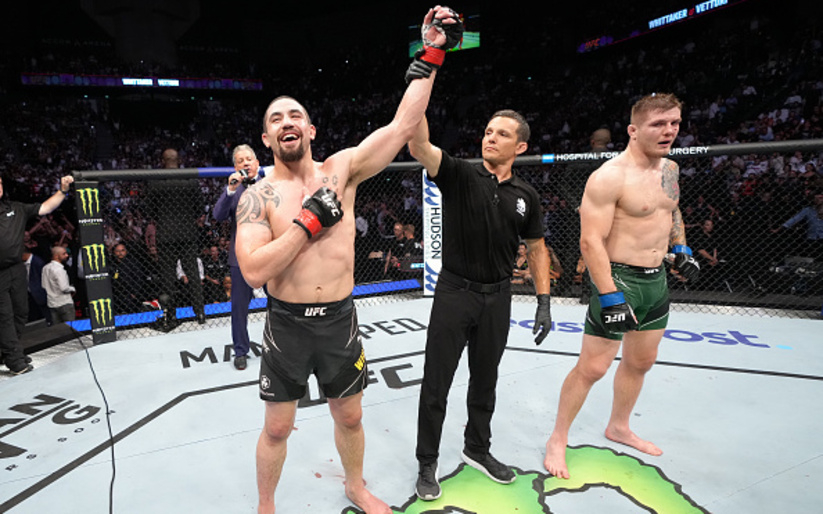