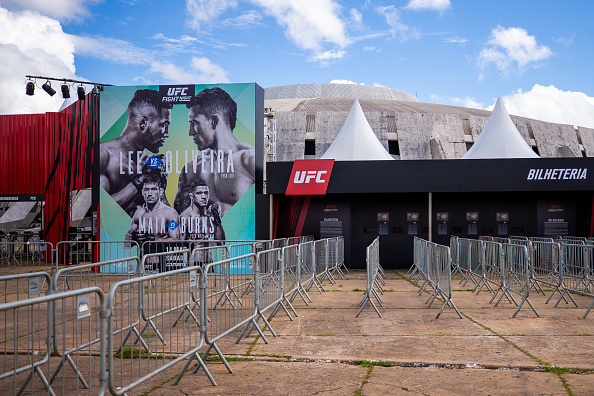 Making the grade is back, and we’re taking a look at this Saturday’s UFC Brasilia main card. The card is going to have unusual energy as the arena will be empty, as the Coronavirus has forced the UFC to host the event sans a live audience. In the feature bout, Kevin Lee will be taking on Charles Oliveira. It’s a great fight on paper and it should be fun to see how it plays out.

The co-main event features a clash of two jiu-jitsu legends as Demain Maia will take on Gilbert Burns. It is a must-see fight simply because the grappling and scrambles should be among the best we’ve seen in the UFC. We’re a week removed from UFC 248 and with the upcoming schedule of events in doubt as coronavirus takes hold, this event should be one you don’t want to miss.

Neither of these fighters is ranked, but it’s still an interesting fight from a competitive standpoint. Francisco Trinaldo is 3-3 in his last six fights but is coming off of a win here against Bobby Green in November. He’s a talented striker and is aggressive and likes to move forward.

John Makdessi has no problems coming forward to facing an aggressive opponent. He loves to strike and while his standup isn’t as technical as Trinaldo’s he does have plenty of power. If he lands clean, he can win with one shot. He’s won three in a row heading into his fight with Trinaldo and will be looking to make it four Saturday night.

This is one of those fights where win or lose, these guys aren’t going to be impacting the top of the division anytime soon. That said, it should be a fun tilt to kick off the main card, and a fight that you can expect to see some great striking exchanges. Trinaldo has a speed edge, and Makdessi holds the edge in power. Not a great fight on paper, but one that could well deliver.

Johnny Walker is a top ten ranked light heavyweight and beyond that, is a blast each and every time he steps into the Octagon. Walker burst onto the UFC, going 3-0 in his first three fights, winning each by first-round stoppage. He was derailed in his last outing however when he was stopped by Corey Anderson. Win or lose, Walker is going to be in a fun fight, and this should be no different.

Nikita Krylov is ranked 12th in the light heavyweight division and but has lost two of three entering this fight. In his last fight, he lost a very close split decision to Glover Teixeira in September. The most compelling aspect of Krylov’s fights is he never wins by decision. He has 26 stoppages in his 26 wins.

This is going to be a good fight and has the potential to impact the top of the light heavyweight division. If Johnny Walker wins impressively, he will likely get a top-five opponent in his next bout. It’s a big fight for Krylov too, who can firmly establish himself in the top ten with a win. You don’t want to miss this fight.

Renato Moicano is a talented fighter who possesses a record of 13-3. He has lost three times in the UFC, but only against elite competition. He’s lost to Brian Ortega, Jose Aldo, and Chan Sung Jung. He’s moving up from featherweight to lightweight in this bout and has drawn a pretty tough fight in Damir Hadzovic.

Damir Hadzovic is 13-5 as a professional and enters this fight having lost to Cristos Giagos in his last outing. Known as “The Bosnian Bomber”, Hadzovic likes to push forward, and be an aggressive striker. He has good takedowns and good ground and pound.

What can be said about Demian Maia that hasn’t already been said time and again? Maia’s as dominant as anyone we’ve seen with his submission game. He’s a human backpack who once he gets his hooks into you, grinds you down to a nub and finds your neck and squeezes until you cry, uncle. He’s the fifth-ranked welterweight in the UFC and has won three in a row.

Gilbert Burns might just be the guy who can play the ground game with Maia. His submission game is top-notch, and he’s a good striker to boot. Burns is ranked 12th in the UFC and a victory over Maia would really move him to the next level in his career. He’s won four fights in a row and would love to submit Maia.

This is a great fight from both a rankings and competitive standpoint. If you enjoy submission grappling, this is the marquee matchup for you. At times when you have two grapplers face-off, it turns into a striking match, but something tells me this fight hits the canvas. When it does it immediately becomes one of the most interesting fights in recent memory.

Kevin Lee is a fighter that typically has really entertaining fights. He’s lost three of his last five, but he’s still ranked 8th in the division and defeated previously unbeaten Gregor Gillispie via first-round knockout in his last bout. Kevin Lee has lost via submission in two of those three losses mentioned above. He was choked by both Rafael dos Anjos and Tony Ferguson. That’s not a good thing when you’re facing Charles Oliveira.

Charles Oliveira has more submissions in the UFC than anyone. Eleven times he’s defeated his opponent via submission, and he’ll be looking to make Lee his twelfth victim. Oliveira also has more performance of the night bonuses than any other UFC fighter. That means, when he fights, it’s fun.

This is an exciting fight that has ranking and potential title implications down the line. It pits two exciting fighters against each other, who won’t go in there and stall. This will undoubtedly be an action-packed fight and you are not going to want to miss it.