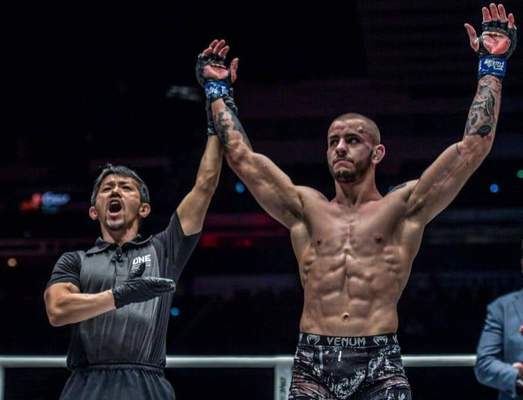 Iuri Lapicus is not a prospect anymore. The undefeated Moldovan is 14-0 and has earned a shot at the ONE Lightweight World Title.

He is slated to meet champion Christian Lee at ONE Infinity 2 later in 2020. The quick rise speaks to how impressive he has been not only during the early stages of his career to get on the ONE roster but in his two decisive performances since arriving on the ONE scene.

Lapicus is on the precipice of becoming one of Europe’s elites and one of the few MMA world champions to come from the continent.

Path to the Title

The Italian-based Moldovan’s undefeated record showcases his grappling skill. In his 14 career victories, Lapicus has a perfect 100% finishing rate with ten career submissions. That includes both of his ONE Championship performances against Shannon Wiratchai and Marat Gafurov.

The submission against Gafurov is what netted Lapicus the coveted title shot.

The Russian was not only a former ONE Featherweight World Champion, but he was known for his ground acumen. Gafurov went on a run of six consecutive rear-naked choke finishes between 2014 and 2016. His ground work became a known threat. However, Lapicus turned the tables and finished him with a rear-naked choke.

And it was not even close.

Lapicus finished the bout in 67 seconds. The stunning performance vaulted him to the front of the line for the title shot and made him an instant figure to know on the world’s stage.

As each bout comes along, Lapicus only becomes more dangerous as an athlete. The grappler is training with the world’s top strikers as a member of Team Petrosyan. His hands are developing quickly, and nobody can count on winning a stand-up battle against him as he applies the wealth of knowledge to his mixed martial arts skill set.

The young 21-year-old has matured before everyone’s eyes in ONE Championship, and his breakout year could prove to be a turning point for a new era that will be ushered in with his meeting against Lapicus.

Lee’s meeting against the Moldovan will be one of 2020s most underrated match-ups. Both men have well-rounded games and are eager to engage in high-paced action. And with each athlete continually improving, there is an unknown element of what new wrinkles they will bring into the championship bout as well.

A victory for Lapicus would be massive for European MMA. The continent has produced a litany of top fighters in over the past decade, but few have ascended to the very top of the sport. Should Lapicus win, he will join ONE’s Kiamrian Abbasov and UFC’s Khabib Nurmagomedov as the lone European-based World Champions (Valentina Shevchenko was born in Kyrgyzstan, but moved to Las Vegas in 2017 after living in Texas for more than two years, per MMAFighting’s Alexander K. Lee).

Being a World Champion is not just a big deal for the career accomplishments of a fighter, but it puts them on a new platform in their home countries. They become a star and someone to aspire to become. As Italian mixed martial arts continues to develop, the Team Petrosyan standout could help begin a new wave of talent both in Italy and his home country of Moldova.

The title tilt against Lee is a critical moment for European MMA as it desperately needs another beacon standing atop the sport with gold.

When Lapicus stands across from Lee with the ONE Lightweight World Championship on the line, he carries an enormous burden on his shoulders to become one of the continent’s top athletes and a figure helping lead it into a new era of mixed martial arts.