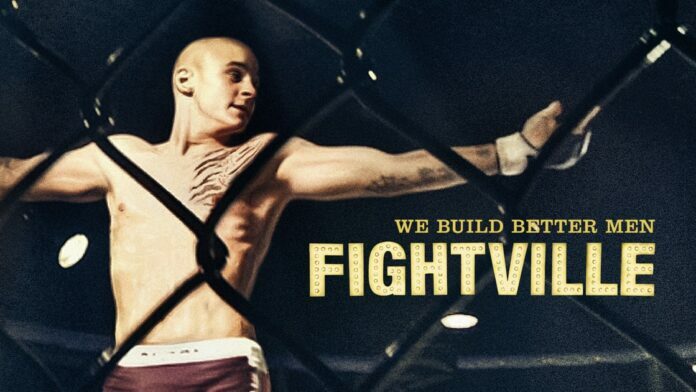 During this odd time in our lives, with many people self-isolating and in quarantine, fortunately, we have a few extra hours in our day to spend binge-watching our favorite shows. We are bringing a new series to MMASucka.com called ‘What to Watch.’ In this first edition, I will go over my favorite MMA documentaries. There will be some that you have seen, but others that have flown under the radar.

Here are our Top MMA Documentaries

Funny backstory. When we first started MMASucka Radio back in 2009, a polarizing figure was a regular weekly guest — Tim Credeur. He had a segment on the live show we had entitled ‘Trailer Talk with Tim Credeur.’ During this segment, he would go through some of his favorite things going on in MMA at the time and one thing that kept getting brought up was his young, talented prospect Dustin Poirier.

Well, the documentary ‘Fightville,’ which was directed by Petra Epperlein and Michael Tucker give fans an inside look at Albert Stainback, Derrick Krantz and the aforementioned Poirier and the beginnings of their fighting careers in Louisiana.

Where to watch: Amazon Prime

Once I Was a Champion

A man who was as mysterious as anyone on the planet, Evan Tanner was the subject of the documentary ‘Once I Was a Champion.’ The feature-length biopic, directed by Gerard Roxburgh examines the life of the former UFC middleweight champion. The film went into production shortly after Tanner’s untimely passing and at times it’s tearjerking as it sheds light on some of Tanner’s biggest struggles. This one is not just for the MMA fan, but anyone who likes a great documentary.

Where to watch: Amazon Prime

The Smashing Machine: The Life and Times of Extreme Fighter Mark Kerr

Another telling tale of a tough life due to early mixed martial arts. The documentary follows two-time UFC heavyweight tournament winner Mark Kerr. From the opening sequence, you know you’re in for a ride of some sort. The John Hyams directed documentary gives you a chilling look at the life of a fighter inside and outside the cage and struggles they endure. ‘The Smashing Machine: The Life and Times of Mark Kerr‘ was originally produced for the premium cable network HBO, where it first aired in 2003.

Where to watch: DVD

Fighting for a Generation: 20 Years of the UFC

The name says it all. Many of the greats from the past and present were interviewed in ‘Fighting for a Generation: 20 Years of the UFC,‘ as they go over what the premier mixed martial arts organization has become today. Through trials and tribulations, the UFC was once a taboo sport and has now travelled the world with fighters from all over the globe. This FOX Sports documentary gives a cool look at what the UFC has become.

Where to watch: UFC Fight Pass

This is one I’m sure many have not seen. Leading up to UFC 200, Cat Zingano was followed around by a film crew and documented what it took to return to the cage after a 15-month layoff. The film shows you the struggles in her personal life and the battle back to the Octagon.

Where to watch: Vimeo

Why not throw in a few outside of MMA? Here are three Brazilian Jiu-Jitsu documentaries that you can watch in full length below.

Coaches We Want to See on The Ultimate Fighter