What MMA Podcasts You Should Be Listening To 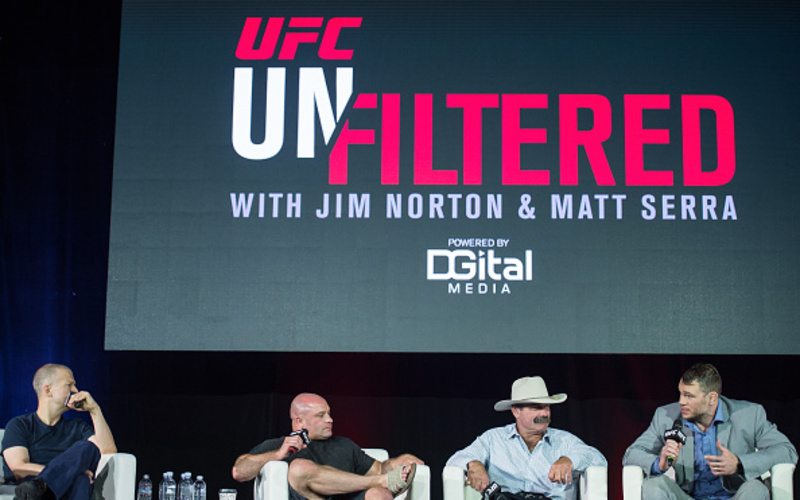 The COVID-19 pandemic has lead to a number of us having to stay in isolation and possibly work from home. If you have UFC Fight Pass, check out our list of toughest debut fights ever. If you don’t, we have two options for you. Firstly you can check out our Top MMA Documentaries piece or can catch a few podcasts, the best of which we will let you know about in this piece. Of course, our own MMASucka Radio is available at all times too!

My personal go-to podcasts for all things combat sports, the Fight Disciples podcast is one of the best. Two recognisable faces from the BT Sport scene, Adam Catterall and Nick Peet provide you with all the news you need. A hilarious mix of good knowledge and even better banter, these two provide laughs weekly.

They post two podcasts a week and often provide interviews with fighters. They produce a boxing and MMA podcast and the recommendation is that you listen to both. Throughout the isolation period, they’re still producing content and it’s a perfect podcast to listen to whilst ‘locked up’!

UFC Unfiltered is the UFC’s official podcast. It’s hosted by comedian, Jim Norton and former UFC fighter and former welterweight champion, Matt Serra. They usually have two guest fighters every week and provide a lot of laughs. You have the perfect mix of comedy with Norton and a wealth of knowledge with Serra.

Lately, they have started to upload the podcasts to UFC Fight Pass. Once a week these two provide their breakdowns on the most recent fights, hype upcoming fights, interview UFC fighters and legends and they overall provide a lot of entertainment.

Ariel Helwani is one of the most recognisable faces in MMA journalism today. Now employed by ESPN, Helwani now provides his weekly MMA show on a Monday. With guests from the world of MMA, Boxing and professional wrestling as well as a number of celebrities, Helwani’s show is relentless. Often longer than three hours long, these are not for the faint-hearted.

He often has guests who have just fought the weekend before, have a fight coming up or have been in the news with a fight announcement. With his interview style of asking the simple questions and sometimes stepping over the line, his podcast is certainly a good one for new fans to the sport. Helwani often does specials with the ‘bigger stars’. Below is an example of one of these:

Whatever you think of Brenden Schaub, you have to accept he was a UFC fighter. Although he retired in 2014, he still very much operates in the combat sports realm. He speaks his mind, which is entertaining and gives his opinions on recent events. You can’t deny that he is knowledgeable about MMA due to his previous outings as a fighter.

Although many don’t rate his stand-up comedy, his views and opinions on fights come across as funny, even if he doesn’t intend them to. He reviews both boxing and MMA on a weekly basis, as well as doing specials. The good thing about this podcast, in particular, is that all episodes air on Youtube, meaning you can check them out whenever. Catch the latest episode here:

UFC commentator Joe Rogan has a long-running podcast which he now has an almost cult following for. Although this one isn’t a combat sports-specific podcast, he has a number of combat sports athletes on the show and often puts on an ‘MMA-Show’. He also does a fight companion, where he watches fights live with a number of guests. It is a real ‘at-home’ feeling and is usually extremely enjoyable.

Names that he has had on the show include Kamaru Usman, Israel Adesanya, Stipe Miocic, Tyson Fury, Deontay Wilder and Dan Hardy. This doesn’t give it justice as to how many combat sports athletes he has actually had on the show. Go and check it out on Youtube to find out who has been on it.

Obviously knowledgeable about all things combat sports, Rogan sits down with athletes to discuss up-coming fights, rumours and often techniques. This provides an interesting listen if you have a spare hour or four in your day!

Former UFC middleweight champion Michael Bisping teams with comedian, Luis J Gomez to provide you with news and laughs on a weekly basis.

Please understand that this is from a UK perspective and these are the podcasts that I listen to! Think I’m missing out on something good? Let me know in the comments below and share your favourite podcasts!