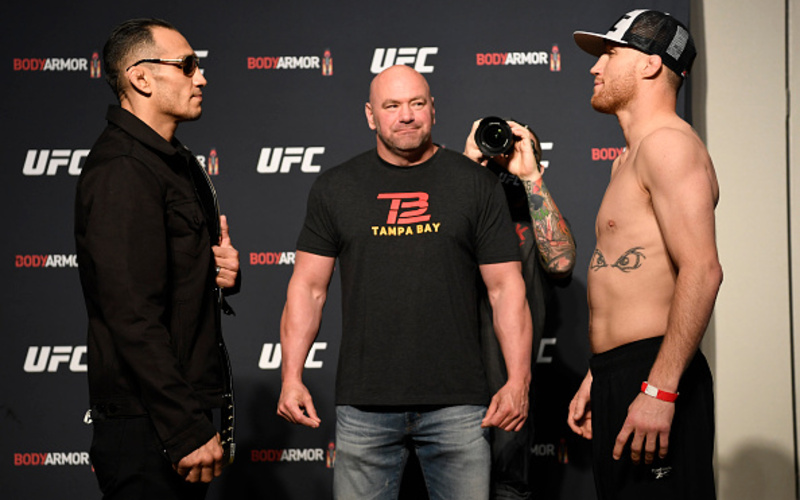 After what felt like a long two months, sports are finally back. The UFC will be one of the first organizations to resume competition as UFC 249 goes down Saturday night. In the main event, the interim lightweight championship will be on the line for the third time in the last three years. He will be taking on former WSOF champion and fellow madman, Justin Gaethje. The winner will be crowned interim lightweight champion and will get the next crack at Khabib Nurmagomedov‘s undisputed title. Entering the fight, Ferguson has not lost since 2012 when he lost a decision to Michael Johnson. Since then, he has been matched up to face Nurmagoemdov, but problems on both sides have caused the contest to never have happened. UFC 249 was originally headlined by Ferguson and Nurmagomedov, but the contest would ultimately fall through for the fifth time. Enter Justin Gaethje.

Gaethje made his UFC debut in July 2017, knocking out Michael Johnson in an exciting back and forth bout. After a successful debut, he lost two straight, the first two losses of his career. Those losses came to former lightweight champion Eddie Alvarez and at the time, future interim champion Dustin Poirier. After dropping two straight, Gaethje bounced back in a main event spot against James Vick. Just over a minute into the first round, Gaethje folded Vick, knocking him out in round one. He would then go on to get two more main event spots against Edson Barboza and Donald Cerrone. He would knock them both out in the first round to place himself among the best in the division.

In the co-main event, UFC bantamweight champion Henry Cejudo makes his return to the octagon. He will be facing off against former two-time bantamweight champion Dominick Cruz. Cruz has been out of action since 2016 since he lost his title to Cody Garbrandt. Due to a number of injuries, Cruz was forced out of competition all this time, having to pull out of a few fights along the way. When Cruz is healthy, he is very good, as he held the bantamweight title two times without ever losing it in the octagon until meeting Gabrandt. Cruz will be looking to win the title for a third time and solidify himself as possibly the greatest bantamweight ever.

After Garbrandt won the title, he would lose it to former champion TJ Dillashaw. The two would rematch the following year with Dillashaw emerging victorious again. That same night, Henry Cejudo defeated longtime UFC flyweight champion Demetrious Johnson to become just the second flyweight champion in UFC history. Following that night, talks of a fight between Cejudo and Dillashaw were heating up and it happened. Dillashaw cut down to 125 to attempt to win a second belt, but failed as Cejudo knocked him out in just over thirty seconds. After the fight, Dillashaw tested positive for EPO and was stripped of his bantamweight title. This set up a vacant title fight between rising contender Marlon Moraes and flyweight champion Cejudo. He would go on to defeat Moraes in the third round by TKO to become the fourth simultaneous double champ in UFC history.

Follow along with MMASucka as we provide you with the results throughout UFC 248.

Kicking off the main card will be a heavyweight contest as Greg Hardy returns to the octagon after his second loss. He will be taking on undefeated Yorgan de Castro who is coming off a KO win over Justin Tafa. Next up will be a featherweight fight between Jeremy Stephens and Calvin Kattar. Unfortunately, Stephens missed weight by nearly five pounds and will give up thirty percent of his fight purse. Stephens is coming off a UD loss to Yair Rodriguez. His opponent, Kattar, will be entering the fight also coming off a loss to rising contender Zabit Magomedsharipov. Finally, before the bantamweight title fight, two heavy-hitting heavyweight contenders collide. Coming off three straight KO/TKO wins, Francis Ngannou looks to earn another crack at the title. In his way will be the undefeated Jairzinho Rozenstruik who has four straight KO/TKO wins since making his debut in February 2019.

*Stephens missed weight at 150.5 pounds and will give up 30 percent of his purse