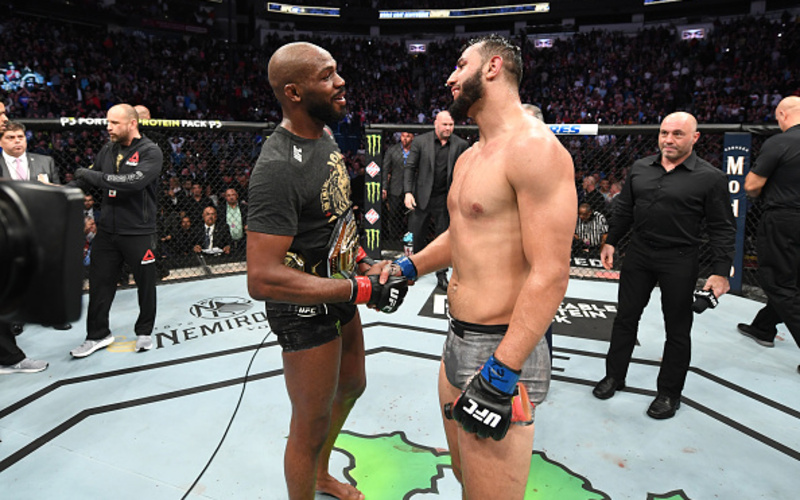 At the top of the UFC light heavyweight division, there are at least three fighters with a claim for a title shot. Standing above them all is UFC legend and UFC light heavyweight champion Jon Jones. Over two title reigns, Jones has defended his title a total of 11 times. On his most recent run, he has taken out three of the top five in the division, but not easily. To win the title, he took out Alexander Gustafsson in round three of their vacant title fight. In his first defense, he defeated Anthony Smith by unanimous decision at UFC 235. Jones seemed to have the most control over Smith making that the most one sided contest during this reign. He would, however, lose two points in the fourth round due to an illegal knee.

His second title defense came that summer when he faced off against Thiago Santos. Santos brought the fight to Jones and really gave him a challenge. By the end of the fight, both Santos’ knees had been completely blown out, but that did not stop him from closing it out. Jones was later revealed as the winner as he would win by split decision. Many argued that Santos could have done enough to dethrone the champ that night but he ultimately came up short.

Finally, in Jones’ most recent title defense at UFC 247, he took on undefeated Dominick Reyes. Reyes was coming off a very impressive run to start his UFC career winning six straight with finishes over Jared Cannonier and former UFC middleweight champion Chris Weidman. Jones once again found himself in a very closely contested fight. This time, however, Jones escaped with the unanimous decision victory, but once again, many people believed Reyes had done enough.

Where does Jones go from here?

Both Santos and Reyes felt that they fought Jones’ close enough to have earned another chance. There have been talks of Reyes and Jones meeting up again in the fall. However, there is another challenger waiting in the shadows, ranked at number four. That fighter is Jan Blachowicz, winner of his last three straight including a knockout win over former UFC middleweight champion Luke Rockhold. Along with Blachowicz, another potential challenger could emerge from Wednesday’s main event.

After losing in his first attempt at the title, Anthony Smith looks to make it back to contention. Standing across from him will be another former title challenger and UFC light heavyweight veteran Glover Teixeira. Teixeira seems to have rejuvenated his career after going 3-3 from 2016-18. Since then he has put together an impressive three fight win streak, earning him a fight with Smith. A win for either man would put them potentially one win away from another shot at Jon Jones.

At the moment, the best option for Jones seems to be the rematch with Reyes. Reyes had even claimed that the UFC had been on board with the idea. There is no other clear contender outside of Blachowicz and he may need at least one more win. A number one contender fight to satisfy the other contenders needs to be made in that case.

Since 2017, Jan Blachowicz has suffered only one defeat and that came at the hands of Thiago Santos. Santos finished Blachowicz by TKO in the third round of their main event, earning him a title fight with Jones. Outside of that loss he has done nothing but win these last few years. He holds notable wins over Jimi Manuwa, Jared Cannonier and Nikita Krylov but his most recent three fight win streak is his most impressive. It began at UFC 239 when he welcomed Luke Rockhold to the light heavyweight division with a brutal second round knockout. He then would go on to win a split decision over another former middleweight Jacare Souza. His most recent win came against Corey Anderson in a rematch of their 2015 fight in which Anderson won. This time around he defeated Anderson, knocking him out in the first round.

You would think that that would be enough to warrant a title shot but with the potential rematches and other contenders clogging the top, why not have him get one more notable win. While Jones and Reyes settle their rematch, Blachowicz should take on the winner of this week’s main event. The winner of that fight would then be next in line to face Jones for the title.

After losing his title shot against Jones, Anthony Smith faced off against Alexander Gustafsson in a main event the following summer. He would finish Gustafsson in the fourth round of their fight, stopping him with a rear naked choke. The win would keep him among the top three in the division. However, since his fight with Jones was the most one sided, Smith is still a couple wins away from a title shot. But if Smith can win on Wednesday and then follow that up with a win over Blachowicz, he will be right back in position. Entering the octagon on Wednesday, he will be facing off against another man that has challenged Jones, Glover Teixeira.

For how late it is in his career, Glover Teixeira has put together quite an impressive run. After a unanimous decision loss to Corey Anderson in 2018, Teixeira won three straight fights in 2019. That run kicked off in January when he faced Karl Roberson. He would finish Roberson that night in just over three minutes, submitting him with an arm triangle choke. Teixeira returned three months later at UFC Fight Night 150 when he faced off against heavy hitting Ion Cutelaba. He earned his second straight submission victory that night as he finished Cutelaba by rear naked choke in the second round. He most recently stepped into the cage last September when he took on Nikita Krylov. Teixeira went on to pick up his third straight victory that night as he took home the split decision win. Picking up a big win over Smith will put him right back into the top five. Adding another big win over Blachowicz could surely grant him a title shot. As for Blachowicz, a win over either would certainly cement him as the next challenger.

What about Thiago Santos?

If the UFC were to go through with the above plan, that leaves Thiago Santos as an outlier. Almost a year removed from his injuries, he is nearly ready to fight again. With that being said, he should not be given anyone outside of the top five as he proved against Jones that he is one of the best. However, the only one that would be open would be Corey Anderson. Now the UFC could make a fight between Anderson and Santos but Anderson is coming off a first round knockout loss to Blachowicz. Therefore, Santos deserves a bit more of a challenge. With that being said, if the Jones/Reyes rematch were to go through, Santos could take on the loser and with a win, be right back in title contention.