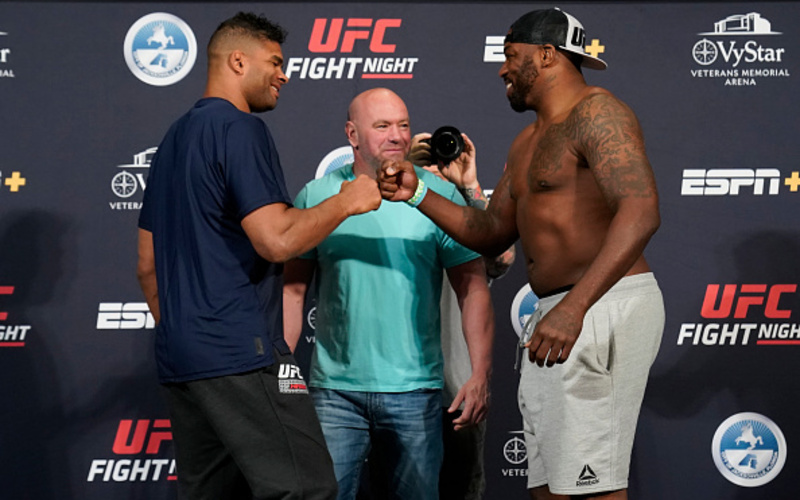 With two amazing cards in the books, the UFC closes out its week in Jacksonville with UFC on ESPN 8 with a heavyweight main event. Making the walk for the first time since the loss of his stepdaughter, Walt Harris looks to pick up a big win. Standing across from him will be former DREAM, Strikeforce and K-1 champion Alistair Overeem.

Back in 2016, Overeem challenged the champion Stipe Miocic for the title, losing in the first round by knockout. Since then, he has gone 4-3 with wins over Mark Hunt and former champion Fabricio Werdum. In his three most recent bouts, he has picked up wins over Sergei Pavlovich and Alexey Oleinik. In his most recent outing he headlined UFC on ESPN 7 against Jairzinho Rozenstruik. Overeem seemed to be nearing a decision win but Rozenstruik finished him in the final seconds of the last round. Overeem looks to rebound with a big win over Harris.

In his last five fights, Walt Harris has gone 3-1, 1NC. The one loss came by disqualification because of an illegal head kick against Mark Godbeer. Following that fight he took on Daniel Spitz and defeated him by TKO in the second round. That win earned him a fight with former heavyweight champion Andrei Arlovski. Originally a split decision win for Harris, it was overturned to a no contest due to a positive USADA test. Harris would return the following May after serving his four month suspension to take on Sergei Spivak. He won the fight in under a minute, defeating Spivak by TKO. He would then go on to knock out Aleksei Oleinik in twelve seconds for his second straight finish. Harris looks to pick up a big win over Alistair Overeem with what seems like the world on his side.

In the co-main event, former strawweight title challenger Claudia Gadelha takes on “The Female Donald Cerrone” Angela Hill. Gadelha’s last fight took place last summer at UFC 239 as she took on Randa Markos. Coming off a unanimous decision loss to Nina Ansaroff, Gadelha needed a win. She would defeat Markos by unanimous decision. Gadelha was then scheduled to fight Cynthia Calvillo, Alexa Grasso and Marina Rodriguez, but all fights fell through due to injuries or weight issues.

She would finally find an opponent in the women’s division’s version of “Anytime, Anywhere” Angela Hill. In just the last seven months, Hill has put together three straight impressive victories. She kicked them off at UFC Fight Night 159 as she defeated Ariane Carnelossi by TKO in the third round due to a doctor stoppage. Hill would follow that up with a second round TKO win over Hannah Cifers at UFC Fight Night 166. Finally, in her most recent outing, Hill faced off against Loma Lookboonme in a short notice fight. She would end up winning the fight by unanimous decision for he third straight win.

Kicking off the main card will be a featherweight fight between Song Yadong and Marlon Vera. Yadong enters the fight with a UFC record of 4-0-1 as he recently fought Cody Stamann to a draw. His opponent, Vera, is coming off five straight wins as he most recently finished Andre Ewell by TKO.

Following that fight will be a middleweight fight between Eryk Anders and Krzysztof Jotko. Anders enters the fight coming off two straight wins as he defeated Gerald Meerschaert by split decision in his last outing. As for Jotko, he will also be riding a two fight win streak as he recently defeated Marc-Andre Barriult by split decision.

Follow along with MMASucka as we provide you with the results throughout UFC on ESPN 8.