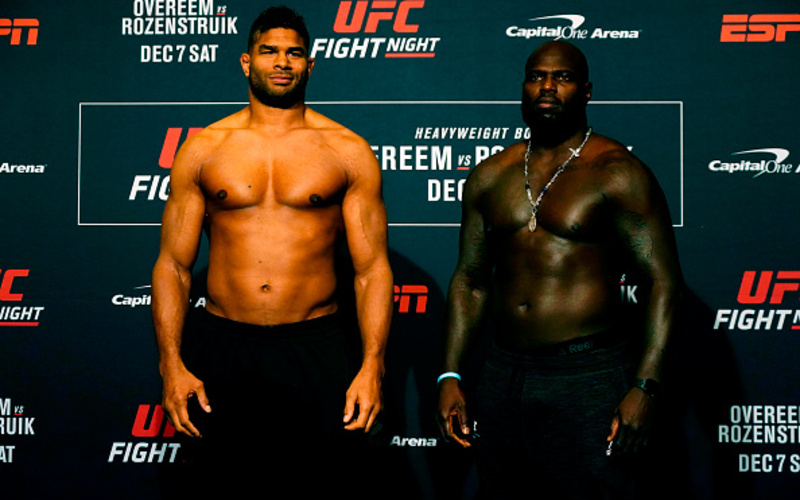 After a two week hiatus, the UFC is back in everyone’s lives. They head to the nation’s capital of Washington, D.C. for UFC on ESPN 7. The main event will feature a heavy hitting main event in the heavyweight division. Former UFC heavyweight title challenger Alistair Overeem returns the cage to face quick rising star Jairzinho Rozenstruik. Overeem last stepped into the cage in April, facing off against Alexey Oleinik. Overeem won the fight in the first round, finishing Oleinik with strikes. The win put his current win streak at two straight with another finish over Sergei Pavlovich in November 2018.

Overeem will be standing across the cage from Jairzinho Rozenstruik who entered the UFC in just February. He made his debut at UFC Fight Night 144, facing off against Junior Albini. Rozenstruik would win that fight by TKO before going on to win his next two by knockout in a combined 38 seconds. He most recently fought at UFC 244, knocking out former chamion Andrei Arlovski. In his first main event, he will look to pick up the biggest win of his career to set up what he hopes will be a big fight with Francis Ngannou.

In the co-main event will be a women’s strawweight fight as Marina Rodriguez takes on Cynthia Calvillo. Rodriguez’s last fight took place in August at UFC Fight Night 156 when she faced Tecia Torres. She defeated Torres that night, being awarded the unanimous decision after three rounds. She will look to remain undefeated against Calvillo, who unfortunately missed weight by nearly four pounds for this bout. Calvillo’s last fight was at UFC on ESPN 1 in February when she faced Cortney Casey. She defeated Casey that night by unanimous decision for her second straight win.

Before the co-main event, a couple of heavyweight vets go toe-to-toe. Seven foot tall Stefan Struve returns to the cage to face off against Ben Rothwell. Struve enters the fight coming off a submission win over Marcos Rogerio de Lima at UFC Fight Night 145. He will look to put together consecutive wins for the first time since 2016 with a win over Rothwell. Rothwell has not had much luck since returning from suspension in March. He has since dropped two straight unanimous decisions to Blagoy Ivanov and Andrei Arlovski. He looks to snap his three fight losing streak with a win over Struve.

Kicking off the main card will be a bantamweight fight. After an upset knockout loss to Urijah Faber in July, Ricky Simon returns to the cage to face Rob Font. Font enters the fight coming off a unanimous decision win over Sergio Pettis. Following that fight will be another bantamweight bout as Cody Stamann takes on Song Yadong. Both men are coming off recent victories over Alejandro Perez as Stamann defeated him by UD while Yadong knocked him out. Finally, before the co-main event will be a women’s bantamweight fight between Aspen Ladd and former UFC women’s featherweight title challenger, Yana Kunitskaya. Ladd most recently lost to Germaine de Randamie in July by TKO while Kunitskaya is coming off back-to-back wins over Lina Lansberg and Marion Reneau.

Follow along with MMASucka as we provide you with the results throughout UFC on ESPN 7.

Virna Jandiroba def. Mallory Martin via Submission (Rear Naked Choke) at 1:16 of Round Two
Makhmud Muradov def. Trevor Smith via Knockout (Punch) at 4:09 of Round Three