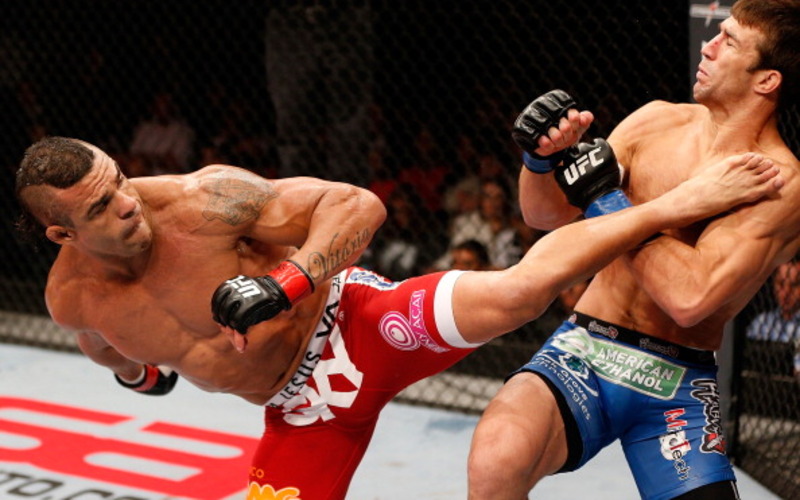 We’re back with a new Today in MMA History article. Even though the UFC is back after a bit of a hiatus due to COVID-19, MMASucka has decided to continue to take a look at some fights from the past. Today’s article looks back at a spoiled octagon debut from a former UFC middleweight champion. That’s right, we are talking about the incredible knockout Vitor Belfort had over Luke Rockhold.

This fight happened quickly. The first few moments had both fighters try and find their range. Right away Rockhold was trying to land a head kick, the first one had him lose his balance and slip, while the second one was easily blocked by Belfort. A takedown attempt by Rockhold was stuffed by Belfort, who then popped right back up hitting Rockhold with a flurry of punches. The two fighters would exchange shots in the center of the octagon until Belfort was able to set up and land a beautiful spinning heel kick that dropped Rockhold. The end was inevitable as Belfort pounced on Rockhold and proceeded to rain punches down, causing referee Leon Roberts to step in and stop the fight at 2:32 of the first round.

After the loss, Rockhold would continue his UFC career. He would pick up wins over names like Michael Bisping, Lyoto Machida and he would eventually go on to win the UFC’s middleweight championship over Chris Weidman. A rematch against Weidman was scheduled right away, however, he would have to pull out due to injury, and Rockhold would have to defend his title against Bisping. The rematch against Bisping didn’t go well for Rockhold, he would lose the title after being knocked out in the first round. Rockhold’s last fight came in July of 2019, where he was knocked out by Jan Blachowicz at UFC 239.

Belfort would go on to continue his legendary UFC career after his win over Rockhold. He did, however, have a few bumps on the road with losses to Weidman, Ronaldo Souza, and Gegard Mousasi. Belfort also mixed in a few wins as well. Wins over names like Dan Henderson and Nate Marquardt. His last fight came in May of 2018 when he was knocked out by Machida in the second round.