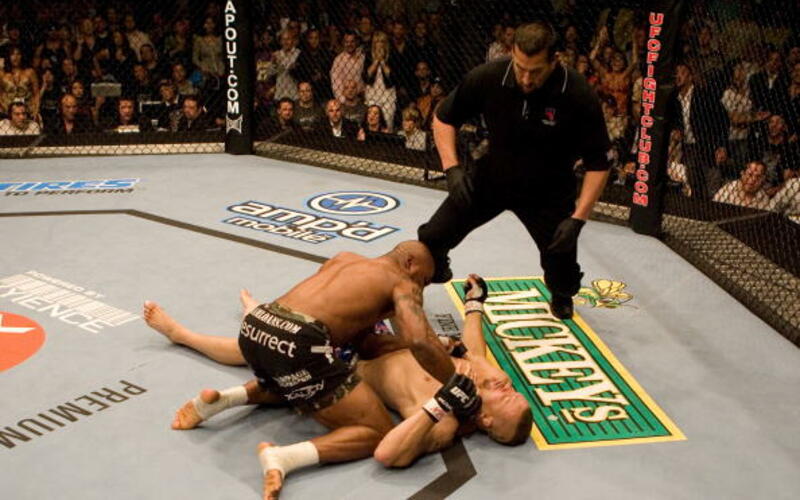 We’re back with another Today in MMA History article. Even though the UFC is back after hiatus due to COVID-19, MMASucka has decided to continue to take a look at some fights from the past. Today’s article looks back at a light heavyweight title reign that ended back at UFC 71. That’s right, we’re talking about Quinton “Rampage” Jackson becoming the new light heavyweight champion after he knocked out Chuck Liddell in the first round.

These two had already met once before back in 2003 under the Pride FC banner. Jackson came out on top in that one after Liddell’s corner threw in the towel. The rematch was similar in the sense that Jackson would end up victorious.

The first minute of the fight saw each fighter throw a few jabs to try and find their range. At one point Jackson threw his hands in the air trying to get Liddell to make a move. Eventually, Liddell threw an uppercut that was countered by Jackson who connected with a combination that made Liddell stumble back. After regaining his composure Liddell connected with a left hook to the body of Jackson, however, Jackson countered right away and landed a right hook to the chin of Liddell that dropped him to the mat. Jackson pounced on top of him, showering him with shots that caused referee John McCarthy to step in and stop the fight at 1:53 of the first round. Crowning Jackson as the new light heavyweight champion of the UFC.

Let’s be real, Chuck Liddell can be considered a pioneer of the UFC and the sport MMA. But after losing the title Liddell started to decline. In his final five fights before he retired Liddell had one win, which was a unanimous decision victory over Wanderlei Silva back at UFC 79. His four losses were to Keith Jardine, Mauricio Rua and Rich Franklin. However, in 2018 Liddell came out of retirement for a trilogy fight against Tito Ortiz. Unfortunately for Liddell, Ortiz knocked him out in the first round.

Jackson went on to defend his title once against Dan Henderson at UFC 75 before eventually losing it to Forrest Griffin at UFC 86. He would pick up UFC wins over names like Keith Jardine, Lyoto Machida, and Matt Hamill before eventually leaving the organization. In November of 2013 Jackson made his Bellator debut where he earned a win over Joey Beltran at Bellator 108. His last fight was back in December of 2019 at Bellator 237 against Fedor Emelianenko, however, it didn’t go Jackson’s way as he was TKO’d in the first round