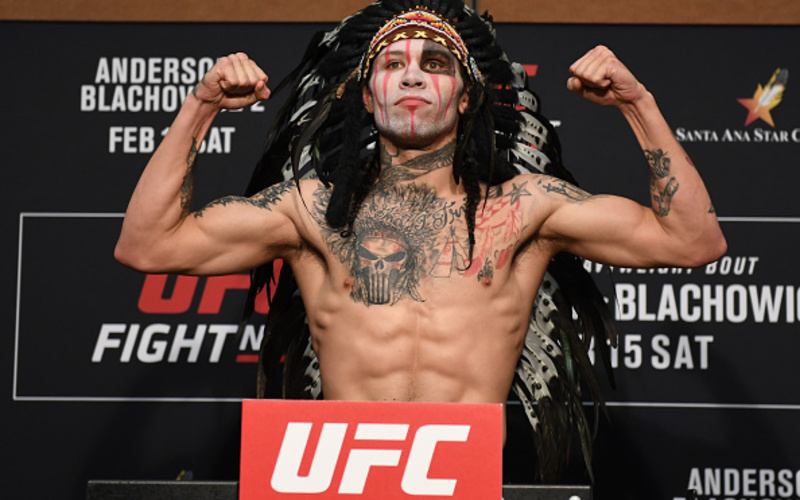 UFC Fight Night 172 goes down this weekend and is set to be the first behind closed doors event held in the UFC Apex in Las Vegas. Headlined by former welterweight champion, Tyron Woodley and the always exciting Gilbert Burns, we take a look at three fights that are slipping under the radar.

UFC 247 saw upcoming star and flyweight standout, Katlyn Chookagian unsuccessfully challenge the dominant Valentina Shevchenko for the flyweight belt. Prior to this, Chookagian went 6-2 in her UFC tenure. Despite impressing against lesser opposition, Shevchenko was simply too much for the New Yorker.

Chookagian will return for the first time at UFC Fight Night 172 since her unsuccessful title attempt. Her opponent on the night? The sister and training partner of the woman who she just lost to, Antonina Shevchenko. Still a fairly new face to the roster, Shevchenko holds a professional record of 8-1, with a UFC record of 2-1. With slick stand up (to be expected from a Shevchenko sister), ‘La Pantera’ last faced Lucie Pudilova. Despite arguably losing the first round, Shevchenko rallied in the second to gain the submission victory.

Chookagian is a huge step up in class for Shevchenko but if she can get the nod, Shevchenko will catapult herself into the mix at 125lbs.

Another fight to keep an eye out for at UFC Fight Night 172 is the clash between the exciting Brok Weaver and Roosevelt Roberts. Weaver will be making his second octagon walk, but his first certainly didn’t go to plan. Having being taken down early on, Weaver struggled to get back to his feet. Despite threatening a guillotine, he was largely unsuccessful. The finish came when his opponent, Kazula Vargas landed a deliberate illegal knee, rendering Weaver unable to continue. Prior to this, the ever captivating Weaver had amassed a 14-4 record, fighting for Island Fights and Titan FC, amongst other promotions.

His opponent in the Apex will be Roosevelt Roberts. Roberts holds a 3-1 record in the UFC, notching two decisions and a submission. With an impressive amateur background, Roberts, despite having less professional fights than Weaver should be entering this one with a lot of confidence.

UFC Fight Night 172 will also mark the return of Mackenzie Dern following her first professional loss. There are clear holes in her MMA game, her striking isn’t great and her wrestling isn’t up to scratch. Despite this, she is a Jiu-Jitsu phenom. If she gets you to the mat, quite simply it’s done. Her loss did come at the hands of the always impressive Amanda Ribas, however.

Dern will be looking to bounce back from her loss against the gritty Hannah Cifers. Cifers had the unlucky job of welcoming Maycee Barber to the UFC and understandably it didn’t go her way. After that, however, she impressed and strung two wins together. She defeated Polyana Viana by split decision and then notched an impressive win over Jodie Esquibel. ‘Shockwave’ did lose her last bout by finish where she ran into a violent Angela Hill, who had an impressive end to 2019 and start to 2020.

If Cifers is going to hand Dern back-to-back losses she has to use her superior speed on the feet to sting Dern. It’s also vital that she stays away from Dern’s clutches and doesn’t go to the floor with her. Whoever gets their hand raised in this one is set for a big 2020.