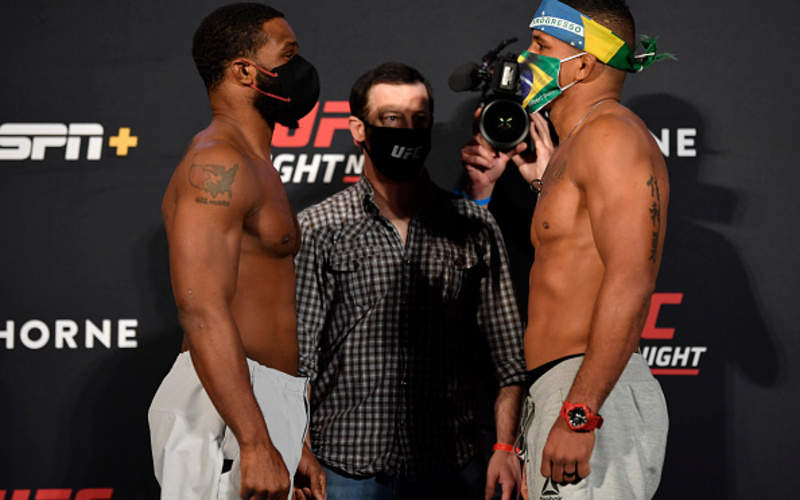 After a brief break, the UFC returns tonight and they will be taking the octagon back home to Las Vegas for UFC on ESPN 9. It will be yet another event with no crowd as the card will take place at the UFC Apex. In the main event, former UFC welterweight champion Tyron Woodley makes his return to the octagon. Before losing his title, Woodley had put together three title defenses. Those wins came over Stephen Thompson, Demian Maia and Darren Till. He would end up losing his title to Kamaru Usman, losing to him by unanimous decision. Woodley was recently scheduled to face Leon Edwards in March until the fight was cancelled. Due to travel restrictions among other issues, the fight was not rebooked as Gilbert Burns would be scheduled to face Woodley instead.

In his first UFC main event, Burns will be facing a very big step up in competition. Burns made his UFC debut in 2014, debuting as a welterweight and picking up a unanimous decision win. After his debut, he would make the move to lightweight for the first time in his career. His run at lightweight spanned five years as he put together a record of 7-3. At 155 he holds notable wins over fighters like Alex Oliveira, Olivier Aubin-Mercier and Christos Giagos. In 2019, he would make the move back to welterweight as he faced off against Alexey Kunchenko. He would win that fight by unanimous decision, only to return just over a month later to face Gunnar Nelson. He earned his second straight win that night, defeating Nelson by unanimous decision. After that he would earn a co-main event fight against former title challenger Demian Maia, defeating him by TKO in the first round.

In the co-main event, heavyweights collide as former WSOF champion Blagoy Ivanov takes on Augusto Sakai. In his last three fights, Ivanov has put together a record of 2-1. Over that span he put together wins over Ben Rothwell and Tai Tuivasa, defeating them both by unanimous decision. His most recent outing resulted in a loss as Derrick Lewis defeated him by split decision. As for Sakai, he enters the cage coming off five straight wins. He made his UFC debut in 2018, defeating Chase Sherman by TKO, followed up by a split decision win over former heavyweight champion Andrei Arlovski. His most recent win came last September as he finished Marcin Tybura by TKO in less than a minute.

Kicking off the main card will be a women’s strawweight fight as Mackenzie Dern returns from her first loss, taking on Hannah Cifers. Previously holding a record of 7-0, Dern recently lost that zero, losing to Amanda Ribas. As for Cifers, she is coming off a recent loss to Angela Hill. Following that fight will be a lightweight matchup as Roosevelt Roberts takes on Brok Weaver. Roberts is coming off a recent win over Alexander Yakovlev while Weaver recently won his debut by disqualification. Finally, before the co-main event will be a catchweight fight at 150 pounds as Billy Quarantillo takes on Spike Carlyle. Quarantillo is coming off his UFC debut last December which resulted in a win as he defeated Jacob Kilburn. Carlyle is also coming off his debut, defeating Aalon Cruz in February.

Follow along with MMASucka as we provide you with the results throughout UFC on ESPN 9.

*Weaver missed weight at 157.5 pounds, he will give up 20 percent of his purse