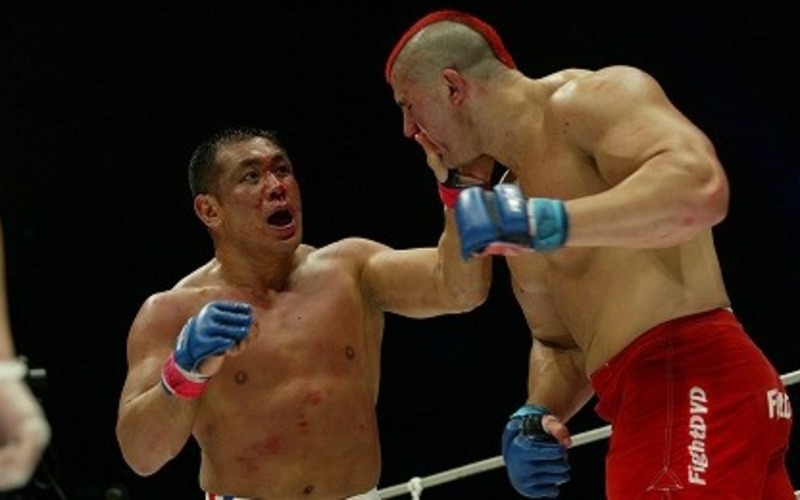 There is a lengthy history of pro wrestlers crossing over into MMA. From the nascent days of this sport, professional wrestlers have indulged their desire to go from work to a shoot. In this episodic series, I will review fights where pro wrestlers foray into the combat world. It’s like a weird, violent version of IMDB and I am DB (Dylan Bowker). This is Pro Wrestlers in MMA # 7: James Thompson vs Kazuyuki Fujita.

Fujita is a durable veteran who has been active even in recent years. The long time pro wrestler has had one of the more tenured runs for a worker that has forayed into the shoot world of MMA. For Thompson, this would not be the only instance where he competed against a member of the pro wrestling fraternity.

The former multi-time IWGP heavyweight champion came in five inches shorter and 24 lbs lighter than the hulking James Thompson. Fujita had a three-year hiatus prior to this bout. The pre-fight hype package featured the quote: “I have already forgot my past. I want to show the new Fujita”. The two had an intense staredown prior to the bell ringing to kickstart the fight.

Thompson took the center and greeted Iron Head with The Rock’s “Just Bring It” hand gesture. James Thompson began pawing out the jab with Fujita looking to shoot in on a few occasions for takedown. Thompson is able to circle out and stuff the attempted takedowns. The colossus came up the middle with a knee that connected on Fujita.

The two have a folk style exchange with Thompson using head and bicep control to position Fujita in the corner.

Thompson began working over Fujita’s body with some knees then landed some punches on the break. Thompson again sprawls on Fujita then lands a knee when the two scramble upward. Fujita was able to connect with some punches in his own right but Thompson would again press Iron Head into the corner. Mega Punk continued to piece up Fujita with kickboxing combos when the two took the center again.

The durability, heart, and cardio of Fujita are evident by his unwavering pace and ability to withstand the beating he is taking. Fujita’s leg starts becoming discolored from Thompson’s leg kicks. Thompson keeps landing hard knees to Fujita’s head and is landing a lot of quality dirty boxing work. Fujita went for a single leg with Thompson toppling into Iron Head‘s half guard.

Some ground and pound was peppered in before Fujita maneuvered things back to his open guard. Thomspon would stand up and throw a soccer kick at Fujita. Fujita finally rallies back and lands big hooks and uppercuts on his oversized opponent. Thompson’s blood gets splattered on the camera lens as Fujita continues to piece him up.

Kazuyuki Fujita is landing alternating left and right hooks with one final right hook serving as the exclamation point. Mega Punk toppled to the canvas and Iron Head stood victorious in Osaka.