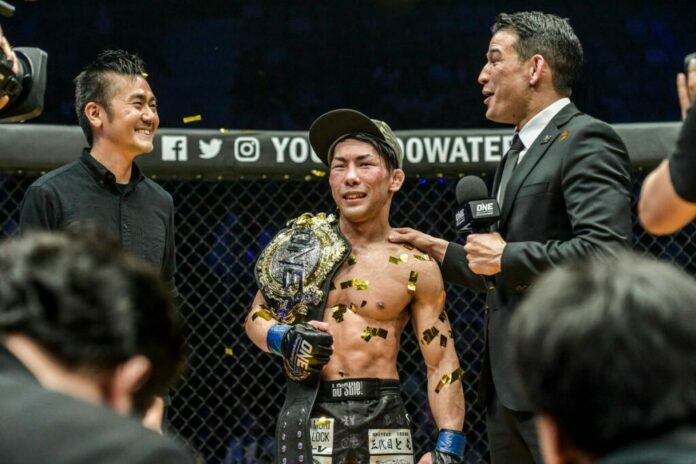 Team Lakay’s Joshua “The Passion” Pacio may be young, but he is already on top of the strawweight world. The 24-year-old is ONE Championship’s shining beacon in the division with an 82% finishing rate that puts fans on the edge of their seats.

After capturing the gold in 2018, Pacio briefly lost the belt to Yosuke Saruta. However, he immediately reclaimed the gold and has since defended it twice to solidify himself as the true champion of the weight class.

However, the strawweight division has been a volatile beast over the years. Can Pacio dominate for years to come, or will past champions return to knock him off the mountain?

Here is a look into the inaugural ONE Championship strawweight rankings.

Kicking off the strawweight rankings is 11-2 Lito “Thunder Kid” Adiwang. The Filipino warrior is on a seven-bout winning streak and is undefeated under the ONE banner.

Adiwang got his start on the ONE Warrior Series. After back-to-back victories, the Team Lakay standout moved to the main roster and picked up a victory over Senzo Ikeda at ONE: Century. In January, he kept the train rolling with a first-round submission win over Pongsiri Mitsatit.

The rapid rise of Adiwang has sent him from prospect to contender in under a year. Another step up could put him in the uncomfortable position of squaring off with his teammate, Pacio, for the gold.

Alex “Little Rock” Silva is a former ONE Strawweight World Champion, and he is coming off a failed bid to reclaim that title back in January.

While he will need to pick up more wins to get another crack at the gold, Silva is still one of the top performers in the division. He has a near 90% finishing rate in his professional career, with only one decision.

Silva is a world-class grappler with eight career submissions under his belt. His window of opportunity to become the king of the division again is not closed, but the recent setback puts him in a precarious position moving forward.

After a surging six-fight win streak, Rene “The Challenger” Catalan challenged Pacio last November for the belt. He suffered his first loss since 2014.

Still, the experience will prove valuable as he tries to march toward another title opportunity. Catalan’s long journey toward the top saw him add his first three stoppage victories to his record.

The Filipino is in a great spot in the rankings to take advantage of any missteps. While he will need at least one victory to earn a title shot, injuries and scheduling issues make him a natural selection to be the next man up.

Former ONE Strawweight World Champion Yoshitaka “Nobita” Naito is on a quest to reclaim the gold, and he may get his wish for a rematch with Pacio.

The Japanese submission ace has posted back-to-back victories over Alex Silva and Pongsiri Mitsatit. The Paraestra Matsudo-trained fighter has shown growth since he dropped his crown while getting back in the win column.

With a 15-3 pro record, Naito may have quietly put together one of the more unrecognized runs in the strawweight division. Reclaiming the title will force the world to pay attention.

“The Ninja” briefly held the gold after a split decision upset over Pacio at the start of 2019. In the immediate rematch, he was ousted by a stunning highlight-reel knockout. While he could have faltered, Yosuke Saruta got back on his horse and returned in style at ONE: Century with a knockout of his own over Daichi Kitakata.

Did that impressive finish earn him a trilogy bout with Pacio? It’s too early to say, but as the top-ranked contender and two previous closely-contested matches, he certainly has a claim.

Saruta’s well-rounded abilities make him a threat over anyone in the division. If the Japanese star can reclaim the title and hold onto the gold, he will cement his legacy as one of the best strawweights in the world.