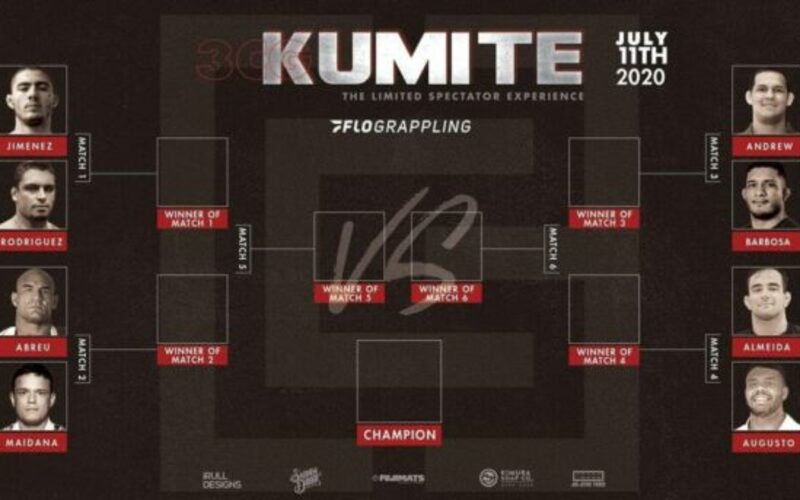 Summer is about to heat up on Saturday with Third Coast Grappling’s Kumite IV: The Absolute. As in 3CG fashion, the first round of fights is straight-up fire and gets better as it moves through the semis and into the finals. We saw the exact same exciting matchmaking in Kumite III, where you’d cringe seeing two of your favorites matched up in the first round, knowing that one would not have the potential to be in the finals. Be honest, in the last Kumite, did you really want to see Tye Ruotolo or Roberto Jimenez not be able to advance to the next round? Probably not — but it had to happen.

There really is only one word for Kumite IV’s first-round matchups, HYPE.

In the first fight of the bracket, you have former Kumite III winner, Roberto Jimenez fighting the black belt killer Nicky Rodriguez. Both bring so much to the table for this fight – Jimenez with techniques that he has been evolving over the last month of competing and Rodriguez with his sheer power and slick wrestling that earned him the title of ADCC silver medalist. There is absolutely no way that this fight could go into OT.

On the same side of the bracket is Cyborg vs up-and-coming Checkmat black belt, Arnaldo Maidana. It will be interesting to see how Maidana fares with the veteran black belt’s unreal top pressure and also if he has changed his strategy since recently facing Rafael Lovato Jr. at Fight 2 Win. Like the match prior, there shouldn’t be a reason for this fight to go into OT.

Moving on to the other side of the bracket is just as exciting with Lucas “Hulk” Barbosa facing the submission machine, Felipe Andrew. While we see Andrew primarily fighting in the gi, he is also an ADCC vet and definitely should not be ruled out on this one.

Last, but not least, Checkmat’s Gabriel Almeida replaces Johnny Tama to round out the bracket against Alliance’s Guilherme Augusto. Both Almeida and Augusto are known for their success in the gi, so it could be a toss-up on who moves on to the semis to fight the winner of Hulk vs Andrew.

3CG’s Ryan McGuire, has hit the nail on the head with matchmaking thus far. With events scheduled out for the rest of the year, one can only imagine what is on the horizon. Could we see Levi Leary-Jones or Nicholas Meregali on a card this year? We’ll just have to wait to find out.

Until then, catch 3CG’s Kumite IV this Saturday at 8 pm CST on FloGrappling. You don’t wanna miss it.