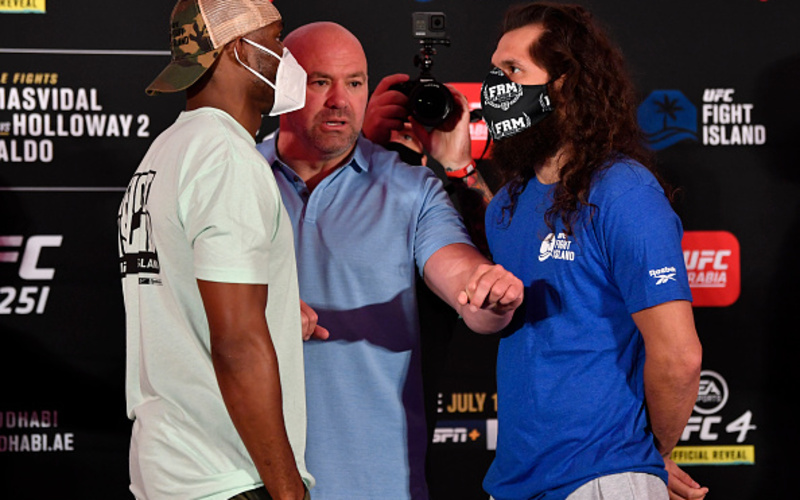 The UFC‘s Fight Island has finally arrived as the octagon touches down on Yas Island in Abu Dhabi and we will have UFC 251 results all night long. The event will feature three title fights, one of them being a match up for the vacant bantamweight title. Heading into fight week, UFC welterweight champion Kamaru Usman was scheduled to face Gilbert Burns. However after Burns tested positive for COVID-19 it looked like Usman would not get the chance to defend his title. But in a big turn of events, the UFC managed to settle their differences with superstar Jorge Masvidal to save the main event.

Back in 2019 at UFC 235, Kamaru Usman put on a great performance over the champion Tyron Woodley. Taking him the distance, Usman took the title from Woodley, defeating him by unanimous decision. In his first title defense, Usman took on Colby Covington at UFC 245. The two butted heads back and forth leading into the fight, making it one of the biggest rivalries of the year. When they finally met in the cage, Usman defeated Covington in the fifth round, finishing him by TKO. Soon after the win, a new rivalry with Masvidal seemed to spark as the two have had a couple of verbal altercations since then.

After an amazing 2019, Jorge Masvidal was named the UFC’s fighter of the year. Masvidal kicked his 2019 off with a main event fight against former title challenger Darren Till. Masvidal walked away victorious in the second round as he finished Till by knockout. About four months later, he landed a big fight with Ben Askren at UFC 239. It was there that Masvidal stunned to world with the fastest knockout in UFC history. As the fight started, Masvidal ran across the octagon and finished the fight with a flying knee in five seconds. After that big win, Masvidal would be paired with Nate Diaz for the BMF title at UFC 244. He kept his finishing streak alive as he defeated Diaz by TKO after round three. Masvidal now looks to win in his first UFC title shot.

In the co-main event, Alexander Volkanovski and Max Holloway will battle it out once again for the featherweight title. These two first met at UFC 245 when Holloway was the champion. Volkanovski put on a perfect performance as he captured the title from Holloway, winning by unanimous decision. Now Holloway looks to redeem himself and take his title back, possibly forcing a trilogy. Meanwhile Volkanovski looks to prove that he is indeed the greatest featherweight in the world.

The third of three title fights, right before the co-main event, will see the vacant bantamweight title on the line. Since entering the UFC in 2018, Petr Yan has won every fight he has been in, going 6-0 in the octagon. Two of his last three fights were unanimous decision wins over John Dodson and Jimmie Rivera. In his most recent outing, he met MMA veteran Urijah Faber at UFC 245. In the third round of that fight, Yan finished Faber by knockout as he landed a beautiful head kick to put him out.

Standing across the cage from him looking to capture gold will be former featherweight champion Jose Aldo. Aldo is currently on a two fight losing streak. One of those losses came to Volkanovski, while the other was a close fight in his bantamweight debut against Marlon Moraes. Many thought he had done enough to defeat Moraes and that could be why he has gotten this chance.

Kicking off the main card will be a women’s flyweight fight as Paige VanZant returns to the octagon to face Amanda Ribas. Ribas is riding a four fight win streak as she most recently defeated Randa Markos by unanimous decision. As for VanZant, she has been battling injuries as her last appearance came in January 2019 as she finished Rachael Ostovich by armbar submission.

Finally, before the title fights begin, Jessica Andrade and Rose Namajunas face off in a rematch of their May 2019 title fight. Andrade emerged from that fight the champion as she finished Namajunas with a slam to capture the title. Namajunas has not fought since then, whereas Andrade would lose her title to the current champion Weili Zhang.

Follow along with MMASucka as we provide you with the results throughout UFC 251.