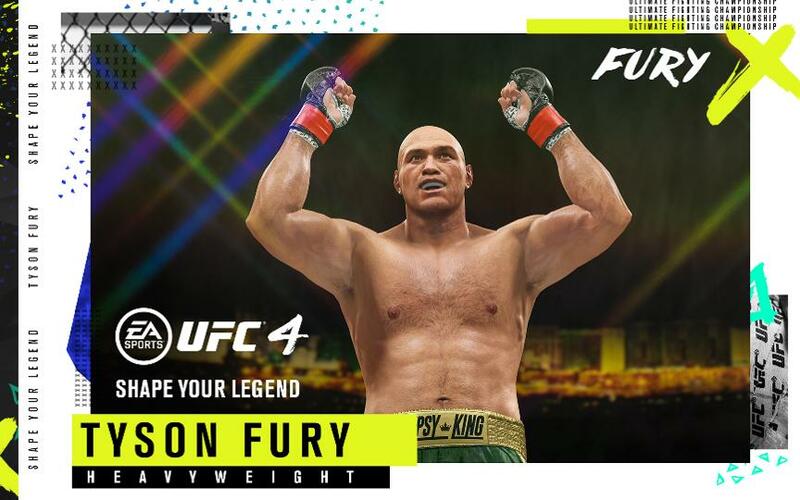 Electronic Arts recently released a closed beta for the upcoming game UFC 4, two years since the release of UFC 3. It is worth noting that betas are usually greatly improved upon by the time of the actual release, however, here are some thoughts on the UFC 4 beta, including some improvements and areas of considerable disappointment.

UFC 4 has ditched the panel menu layout found in UFC 3, replacing it with a far more concise list of options on the left-hand side that look surprisingly clean. The soundtrack on the beta is limited but seems to have mercifully moved on from the metal backbone of UFC 3 to a more rap-heavy and realistically mainstream playlist.

One of the best bits about the UFC 4 beta is the pre-fight lobby. Fighters are presented in a series of panels akin to any arcade fighting game, and once each player has selected a character there is a quick face-off before you enter the game. You can see what fighter your opponent is picking as they scroll through the characters, meaning that players can create fun matchups as they play online. Players are also able to customize their profile with badges, banners, and a quote from your favorite fighter allowing for an injection of your personality, something which UFC 3 sorely missed.

The loading time to find an opponent is almost instant and there are more improvements to communication between players.  There is now a faceoff in the octagon where each player chooses a taunt to perform. Players can now also choose a celebration after the bout, including signature moves such as Jorge Masvidal‘s infamous celebration after knocking out Ben Askren. Players can also message each other between rounds and after the bout, choosing from a selection of predetermined messages. This combined with the option for an instant rematch gives the opportunity for players to form rivalries with online opponents, somewhat emulating a more authentic fight experience.

Unfortunately, most of the gameplay notes will come under “the bad” in this article. However, that is not to say that the actual octagon experience is all bad. The commentary team of Jon Anik and Daniel Cormier is incredibly refreshing, even if it is a shame that Joe Rogan was left out of the team. One of the most noticeable differences is that when you get rocked there will be a flash in the corner of the screen and cloud your vision. A similar introduction is found on the mat, where if you are being choked out the screen goes blurry and you hear your heartbeat. Those who have trained will find that these additions might give flashbacks to times where you have been hurt in sparring, which certainly helps bridge the realism issues which most fighting games have.

The biggest change demonstrated in the UFC 4 beta is a complete rehaul of the clinch system. The new clinch system is incredibly fluid, with players being able to mix in a variety of strikes and takedowns whilst pressuring their opponent to the cage. The new mechanics are far more realistic and aesthetically pleasing, with there being a sense of unpredictability whenever you begin a clinch sequence. There is also a far more varied shot selection whilst you are in the clinch, making it seem less mechanical than UFC 3.

There has also been a tweak to the ragdoll system, making knockouts a lot more interesting than the repetitive examples found in UFC 3. These animations make the fighter fall a tad too fast, but this can easily be addressed before the full release. One of the more crazy additions is the fact that you can perform counter submissions. This can change the momentum of the fight in an instant and is an incredibly fun way to win in dramatic comebacks. Overall the gameplay is shown in the UFC 4 beta undoubtedly has the potential to be a lot more rewarding for players, but there is still a huge amount of work to be done.

Before delving into the issues with gameplay there are a few other minor disappointments to address. Fighters are now rated by a five-star system, which seems reductive even if there are complete stat lists available. There are also no options to choose shorts before a fight and the judges’ scorecards are no longer revealed after your bout if there is a finish. There seems to be no reason to have removed these features, with the latter actually being quite important to gauge your performance in a bout.

The fighter “move list” was also littered with mistakes, with many moves being detailed to have the same controller input and the UFC 4 beta also crashed a few times immediately after bouts. These issues should be easy to fix but are both slightly disappointing considering UFC 4 is a month away from release.

A Word Of Warning

Be warned before playing UFC 4 beta, the new controls are really… REALLY hard to get a hang of. However, these issues seem to be exacerbated by an imbalance between the offensive and defensive grappling mechanics. The clinch system is fun, but it is a complete guessing game. There are no in-game guides detailing how to progress the clinch, and every exchange seems to flow the exact same. The fighter who initiated the clinch is usually able to advance position to a Thai clinch or back clinch, and then from there reigns down strikes or lands a takedown. Although there is a great flow to these moves, it needs to be more clear how to progress and defend transitions in these exchanges.

It is near impossible to stuff a takedown, for no apparent reason, if your opponent is anywhere near to you. However, the biggest problems start once you hit the ground. If someone postures up it seem the only method of effective defensive is holding block and hoping your fighter drags them down or being able to slip their punches and sweep. There is a new head movement addition for when your opponent postures up, but the fighter’s head moves way too fast and looks pretty ridiculous. Ground and pound is very overpowered and it is too difficult to escape bottom position if your opponent is postured up. This must be addressed by the full release, potentially by there being more clear indicators of how to escape these sorts of positions.

There is also a completely revamped submission mechanic, where if you are being submitted you must move your “submission bar” with your left stick away from your opponents. The problem with this addition is that it is nearly impossible to escape submissions as the offensive grappler’s submission bar is so large. Although the new submission system is definitely more fun than UFC 3, without significant rebalancing it makes every matchup incredibly boring as the entire game becomes about who can land the first takedown and sink in an easy submission.

But What About Striking?

There been very little change to striking. Although there are slight changes to some techniques, including leg kicks, it is quite underwhelming that there has not been a more impressive overhaul of a blatantly sub-par striking system. One notable difference is that slipping punches is less effective and that knee and elbow spam is slightly harder, which could strike fear into some UFC 3 players’ hearts.

The biggest disappointment with the UFC 4 beta is the fact that visually, very little has changed. It is hard to identify any major graphical improvement which is certainly not good enough after a two-year wait. Before entering the octagon there has been no change to the build-up and walkout graphics which again makes the game feel stale. The angles you view the fight have been changed but seem a bit less aesthetically pleasing than UFC 3. However, there is every chance that this will become less of an issue the more you play the game.

Overall the UFC 4 beta definitely had some fun introductions, but ultimately failed the litmus test of a successful sequel. It is pretty baffling that the graphics have not improved, especially considering how poor they have always been. Thankfully Electronic Arts should be able to address the balancing issues with gameplay, making playing UFC 4 a more pleasurable experience than the beta. However, the fact that the at times jerky striking system has remained near untouched is a huge shame, especially considering most players enjoy striking battles more than the grappling exchanges. The UFC 4 beta is a step in the right direction, but certainly isn’t the leap that fight fans wanted and deserved.