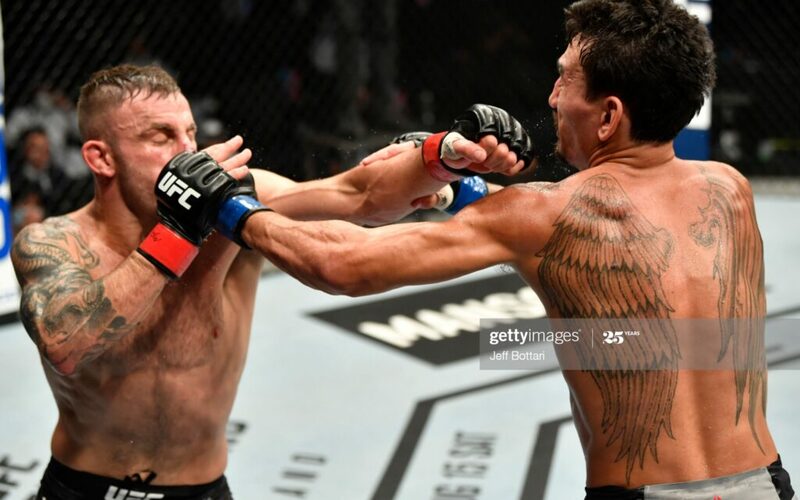 Holloway vs Volkanovski was not a robbery. When both men fought for the UFC Featherweight title on Saturday, it was a fantastic performance from them. Max Holloway (21-6) was able to address the challenges Alexander Volkanovski (22-1) brought to his game and provided the champion Volkanovski with his difficulties. The contest was close, but in the end, “The Great” got the split decision win over Holloway. Several people decried the result calling it a robbery. This was because of Holloway’s early success, rocking Volk in the first and second rounds.

The vitriol online got so bad Max Holloway himself had to tell people to stop on twitter. The fight was close, as can be seen by the split decision, and that itself should tell people that this fight was not a robbery. But let’s see how the fight was scored and how it should have been scored according to the criteria.

The UFC uses the 10 must scoring system. Essentially each round is scored separately. The winner of the round gets 10 points, and the loser of the round receives 9 or fewer. Rounds are scored by measuring which fighter had the more effective: striking, grappling, aggression and octagon control. Each is weighted in order so effective strikes matter more than effective grappling, which matters more than effective aggression, which matters more than octagon control. Effective is measured by how close to ending the fight was each technique. So if a fighter can knock their opponent down or nearly sinch a submission, it is likely that fighter is going to win the round because they were closer to finishing the fight.

By these criteria, it is easy to see that Holloway won the first two rounds. He was able to hurt Volkanovski and dropped him in each round. The contended rounds are the final three. So let’s look at them and see why Holloway vs Volkanovski: is not a robbery

Round three started tepidly with a few kicks exchanged. Max Holloway initially has success pushing Volkanovski back and firing off when he gets Volkanovski to the cage. Max Holloway is also able to land a few sweet body kicks and knees as well as threaten the jab. Volkanovski does excellent work to circle out and starts pressuring forward.

Round three is where Volkanovski turns it around

The Aussie uses feints for kicks to pursue boxing combinations and lands a couple of right hands. At this point, Alexander Volkanovski is avoiding dipping his head and is trying to keep it on the outside of Max Holloway’s front hand. Moving his head to the outside allows him to avoid the uppercut that has been nailing him in the first two rounds. Volkanovski rips to the body and the head.

Out in range, Volkanovski lands a banging left hook that catches Holloway’s attention. Volkanovski double jabs and continues to land the left hook. He manages to hit some inside leg kicks as well. Blessed does a good job of answering using kicks, but Volkanovski has slowed Holloway’s output. The rest of the round, both men do a good job of making the other man miss. Blessed nearly connects with a head kick, but Volkanovski sees it coming. The round is exceptionally competitive, but Volkanoski was able to consistently land damaging shots, while most of Holloway’s shots were partially blocked or didn’t connect clean. If I were to score it, I would say 10-9 to Volkanovski.

Round four is as close as they come

Round four, in my opinion, is the most hotly contested of the entire fight. The Australian does a good job of parrying the jab and landing the low kick. Holloway uses flurries and explosive movements to keep Volkanovski on his toes. Blessed stalks Volk to the cage, but the Australian circles out and doesn’t get caught flat. The Great does a good job of doubling up on his lead left, using jabs, and then hooks to the body on Holloway. Blessed threatens knees to dissuade Volkanovski from exploding forward. Both men do a good job of making the other miss. The Great lands some right hands and left hooks. The Hawaiian lands a solid lead uppercut forcing the Australian back. Holloway lands a spinning back kick to the body as Volkanovski tries to circle from the cage.

The Australian continues to land leg kicks and threaten with bursts. The leg kicks are starting to take their toll on Holloway. His movement is off, and he’s reacting to each connected kick visibly. The Great manages to land a takedown but deals no damage nor makes anyone positional success. The Hawaiian gets up, and Volkanovski nearly catches him with a left hook on the break. The Australian has some success with his jab and narrowly avoids a head kick. He lands a few good jabs and buckles The Hawaiian’s leg with a kick. Volkanovski tries to shoot again, but the former champion sprawls. They clinch, and The Hawaiian lands several uppercuts.

Once separated, both men continue to make each other miss. Volk lands a hard right hand towards the end of the round. Volkanovski has success jabbing in and setting up his right hand. 10 seconds out, Blessed flurries and lands a hard left hook on Volk. The Hawaiian goes for some head kicks but misses as the round ends. Judging the round is difficult. Both men were aggressive, and both men landed hard shots. Both men came forward with bad intentions. I felt Volkanovski did a bit more, but I could consider it being a draw as well. Volkanovksi 10-9

Round five starts with both men feinting in open space. The Great tries to land some kicks, and Holloway returns with some kicks of his own. Both men try to engage in boxing exchanges but miss their opponents. Volk blocks a solid kick from Blessed. Holloway does a good job of checking Volk’s kicks. Volkanovski lunges forward to land shots and The Hawaiian counters with a sweet left hook right uppercut. Holloway continues to stalk forward, both men exchange and The Great lands a glancing right hook. Both men land a few pot shots here and there but nothing significant. The Great shoots for a takedown and gets Holloway against the cage.

Round five is where Volkanovski takes over

Holloway breaks free and the Australian lands a left hook on the break. Volk lands some low kicks before another exchange where he lands a hard right hand. He attempts a knee pick, but Holloway breaks free and barely misses a check left hook. The champion handfights, slips Holloway’s jab and nails him with a left-hand counter. By this point, both men have slowed down, but The Great has Holloway’s timing on his entries and counters him hard. The Australian begins to have success pressuring The Hawaiian and hitting him with a straight 1-2 combination. Holloway makes Volkanovski miss on an entry and lands a jab straight lead leg high-kick combination.

Volkanovski continues to set up shots with his kicks. He manages to land another takedown but deals no damage, nor does he advance position. Holloway gets underhooks and breaks away. Volk lands a jab and a low kick that breaks Holloway’s stance. He shoots another failed shot but manages to land another left hook on the break. Activity by this point is significantly slower, but The Great is still landing hard shots.

Both men trade in the center with the occasional failed shot from Volk. The Hawaiian tries a flying knee but collapses into the clinch where Volkanovski lands a takedown and finishes the fight in top position. This round is likely the easiest of the last three to score. The Australian had the most pressure and landed the cleanest and hardest. Blessed still did an excellent job, and it certainly was incredibly competitive. However, Volk was able to deliver the most damage, and so I score it 10-9 Volkanvoski.

Why do people think its a robbery?

A lot of the perception people had with Holloway winning had to do with the first few events within the fight. Seeing someone get dropped and hurt changes the perception of the fight. My first viewing of the fight, I had it 3-2 for Holloway, believing he had won it the first time around. For me, the fourth round was the closest between the two. Also, the first two rounds were clearly in Blessed’s favour, while the rest were incredibly close.

This gives the idea that Holloway should be winning since he is so close to it. But remember, each round is scored in a vacuum. No matter how well someone was doing the round before, it does not affect how they do in the next round. This all comes together to suggest that the results of the fight are not an unreasonable conclusion to come to. Even if Blessed is the rightful winner, the fight was not a robbery.

For a fight to be considered a robbery, it has to be one-sided, and yet the outcome favors the wrong side. Essentially it needs to be a clear win. But this fight was not clear. Even the rounds The Hawaiian won were close affairs, with him managing to score significant moments within the first two rounds. A razor-close fight, by definition, cannot be called a robbery.

And this is why this talk of robbery is quite frustrating. Holloway put in one of his career-best performances against The Great.

Holloway had been able to adjust to Volk’s kicking game with kicks of his own. Holloway was also able to address his inability to stick to the pocket when receiving a hard shot. He was able to sure up the exploitable options for the Australian and force him to work. Volkanovski faced legitimate trouble in the first two rounds and showed the heart of a champion to come forward and adjust to The Hawaiian’s game. Both men did amazing things, but all anyone can talk about is what the judges wrote on a piece of paper. Sure this affects Holloway’s legacy and a paycheck, but we can fix that by talking about the amazing fight instead of what the judges had to say.

Holloway vs. Volkanovski was not a robbery, but it was probably the best fight of 2020, and I personally am grateful to have witnessed it.