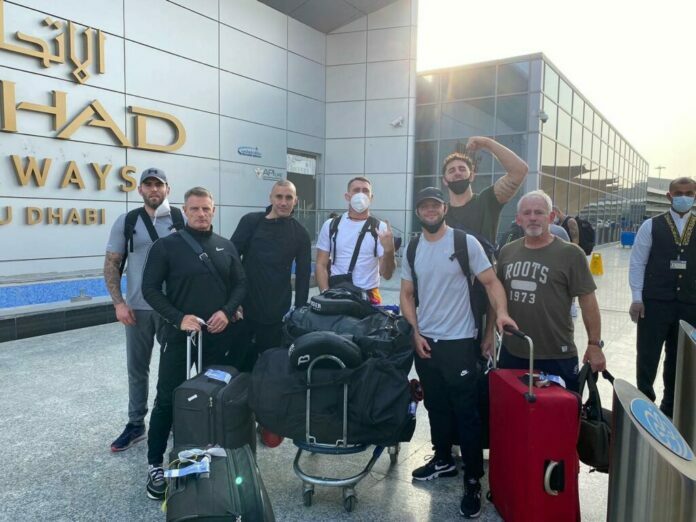 Team Kaobon have arrived on Yas Island ahead of the July 25th card. The Liverpool based gym have three fighters taking part on the final Fight Island card. We see the debut of exciting heavyweight prospect, Tom Aspinall, the return of commonwealth bronze medalist, Mike Grundy and we also see Darren Till participate in the final fight on Fight Island when he takes on Robert Whittaker.

6’5, 255lbs, Tom Aspinall has the potential to be a real star in the UFC’s heavyweight division. In arguably the shallowest division in the promotion, heavyweight stars can be made in just a few fights. Notably, Francis Ngannou had six straight finish victories and was favourite going into his title bout with Stipe Miocic. He was very much found out in this bout as being very ‘raw’. He had almost no wrestling game at all and was exposed in this realm.

Aspinall, on the other hand, is very well rounded. With a base in BJJ, the black belt is very capable on the ground. Although notching only the one submission finish in his professional career, don’t be mistaken, Aspinall is legit on the ground.

Despite his extensive ground game, he prefers the stand-up game. Six of his seven wins have come via TKO/KO proving just how capable he is when striking. His boxing game is arguably his strongest aspect. A number of times Aspinall has been called in as a sparring partner of WBC heavyweight champion, Tyson Fury, proving just how legitimate his boxing skills are.

Aspinall takes on the returning Jake Collier. Collier holds a record of 11-4 professionally and 3-3 in the UFC. Collier has been out of action since 2017 with suspension due to a banned substance.

Mike Grundy is the rare breed of an elite British wrestler. In Britain, wrestling is very much the ignored martial arts. Not learnt in schools or colleges, there is not nearly as much emphasis on it in comparison to that of the US or Russia. Despite this, commonwealth games bronze medalist, Mike Grundy is elite.

With a professional record of 12-1, with his only loss coming in his fourth fight to UFC veteran Damian Stasiak, Grundy has been flawless since. Compiling eight wins, with five finishes, Grundy was given a UFC contract. He debuted in March last year against Nad Narimani and notched the TKO finish in the second round. In an exciting fight, Grundy chose to keep it standing, knowing that he could take it to the ground whenever he wanted.

He takes on the tough, undefeated Movsar Evloev. 12-0 in his professional career, the former M1-Challenge bantamweight champion is a problem for anyone at 145lbs. With each man having a strong wrestling base, we could see this one play out on the feet for 15mins.

Does ‘The Gorilla’ need an introduction? The former welterweight title challenger had a quick and exciting rise to the top. Entering his title bout at 17-0-1, Till’s confidence was through the roof. Did this play to his detriment? Perhaps, although the learning curve certainly made him change things up. After brutal weight cuts down to 170lbs, Till debuted at 185lbs (and made weight easily, despite a stressful fight week) to take on Kelvin Gastelum.

The brash Liverpudilain clearly has the ‘pull’, headlining the first-ever UFC card in his home city of Liverpool in 2018. Having defeated Gastelum in New York, Till shot himself straight into title contention at 185lbs. With slick stand-up and an underrated wrestling game, a fight between him and champion Israel Adesanya could be amazing.

First, though, Till must get through former champion Robert Whittaker. The former middleweight king, Whittaker lost his belt to ‘The Last Stylebender’ back in October of last year, suffering his first loss at the weight. We can expect Whittaker to be extremely motivated for this one on his road to redemption.

In what is arguably one of the most intriguing fights to take place on Fight Island, we an expect flames from this one for sure.