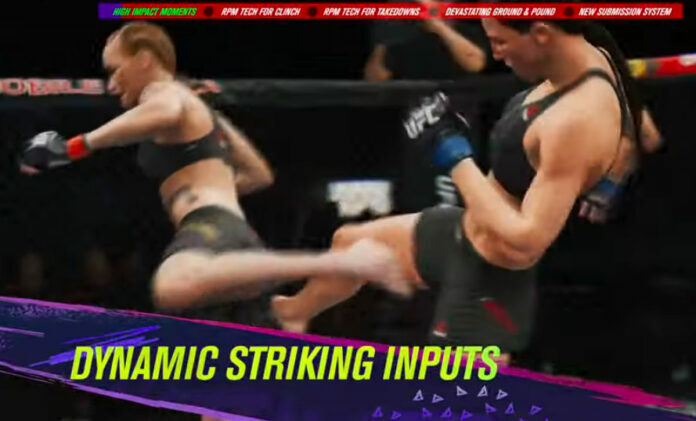 Video game Goliath EA‘s bestselling EA Sports UFC series has just had a gameplay trailer released for its latest entry.  The UFC 4 gameplay trailer reveals many of the changes already familiar to those who played the beta. These include the new, completely overhauled clinch system. Also shown are the new organic knockouts which are far more varied than those of previous entries in the series.

The clinch system displayed in the trailer offers several new options. Not only are the options for trips and takedowns increased but clinch entries and exits have been hugely expanded. The opportunity for standing submissions has also been added. UFC 3‘s much disputed ground game has been overhauled as well. Now there are more dynamic ground and pound positions. Players can even choose to strike during submission attempts as well as changing position during a submission.

Takedowns have undergone some of the biggest changes. There has been a significant increase in the options available during and after a takedown attempt. Players can now use footwork as takedown defence more effectively. Momentum has also become far more important and driving takedowns are now an option. Submissions like guillotines can also be used to defend against or punish takedowns.

Striking has gone through an interesting control change. Whereas previous entries in the series put focus on execution of several simultaneous button presses, UFC 4 features an old school SNK-esque system where players tap a button to execute a light attack and hold it to deliver a heavy attack.

UFC 4 has taken a new direction towards a more abstract view of the sport. Previous games in the series have featured people who never competed in MMA like Bruce Lee. However, UFC 4 has a much greater emphasis on this, offering heavyweight boxing champions Anthony Joshua and Tyson Fury as pre-order bonus characters. In addition, UFC 4 features two new modes – Backyard and Kumite – that allow players to fight in unsanctioned matches or in a fantasy environment.

The UFC 4 gameplay trailer revealed some features that would continue in this crowd-pleasing mould. The new high-impact moment system shows shockwaves travelling through fighters as they are hit by powerful strikes. In addition, players will have to battle through screen effects used to represent the feeling of getting rocked if they start taking heavy hits. Finally, a new stun system lets both players know if one has been seriously hurt, allowing a player to go for the finish or try to survive a round.