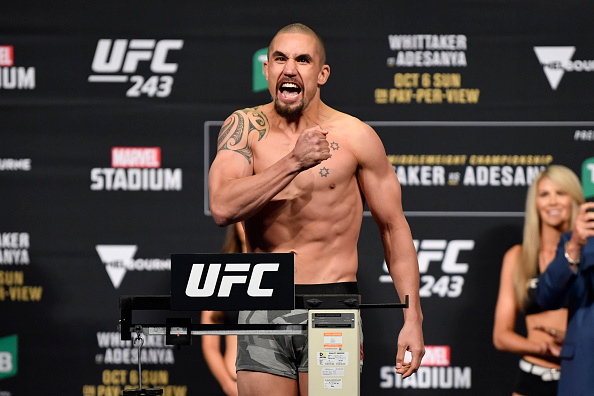 Robert Whittaker (21-5) faces Darren Till (18-2-1) in the main event of UFC Fight Night 174 on UFC Fight Island. This fight promises to be a compelling clash of elite strikers and is a puzzle for the would-be analyst. Predicting a fight is not an exact science, with most analysts having a pick rate of around 60% (if they are good at least). So as someone who is undefeated in article picks, I offer you, my dear reader, some advice on what to look at when predicting a fight. So please join me as we examine Whittaker vs. Till and learn how to predict a fight.

How to Predict a Fight

The most important thing when it comes to predicting fights is understanding the critical phase of a fight. What this means is, what will be the deciding factor of a fight? It also asks where will this take place in the context of a Mixed Martial Arts fight? The best way to figure it out is to look at what each fighter does well. In the case of “Bobby Knuckles”, it’s clear that Whittaker is good at closing the distance, avoiding takedowns and feinting entries. For the “Gorilla”, Till is good at outfighting, has decent footwork, and a robust rear hand straight. Both men are incredibly quick for the division and pack power in their shots.

Another thing to look at is what both fighters are bad at. For Till, it’s his defensive reactions, which is mostly just moving backward with his chin in the air. For Whittaker, it is defensively irresponsible when exiting exchanges.

So the biggest question regarding this fight is if Whittaker can close the distance, and what Till can do if that happens. The best way to learn this is by watching their previous matches and seeing how they manage. This brings us to our next step, watching tape. One thing I don when watching tape is mute the audio. While the commentary is useful for fans to follow the action, it can skew the way a fight is going if not entirely mislead the viewer. I don’t believe this is intentional; rather, it is different to follow and call a fight live. Another useful tip, this time courtesy of writer Jack Slack, is keeping the footage to a window covering at most half the screen. This allows you to see the full scope of the fight. It also gives you space to make notes as you follow the fight.

If you’re having trouble keeping up with the action, another thing you can do is slow down the playback. This is especially useful for weights like flyweight and bantamweight, where the fighters are so fast and scramble so often that it can be challenging to keep track of what happens.

Another thing to remember is not to go too deep. You want to see the fighter’s last fight and their most recent similar stylistic matchup. A similar style matchup is someone who has similar abilities to their latest opponent.

So for Till, his nearest matchup to Whittaker would probably be Kelvin Gastelum (16-6). While Whittaker presents more threats, he does blitz in, relying on his superior speed to beat his opponents. For Bobby Knuckles, his most similar opponent to Till would be Brad Tavares (17-7), not because they are massively similar offensively, but because they have identical defensive holes.

Now, what does the Till vs. Gastelum fight tell us? Well, it tells us that Till has identified where his defensive holes are and has made moves to address them without compromising his overall game. Till did this by clinching up with Gastelum whenever Gastelum was able to close in on the pocket. Now again, Whittaker presents more threats than Gastelum and will probably be able to discover an answer to Till’s clinch. In my opinion, “The Reaper” will likely look to catch Till with a left hook or a left high kick on the break. This is because the Gorilla still exits from exchanges backward with his chin in the air.

What about Whittaker’s defensive holes? Is there any space for Till to capitalize on the mistakes Whittaker makes? Well, Till could catch him coming in with a straight left, but it’s unlikely that Till would be able to capitalize on the opportunities that Whittaker may present. Firstly because he lacks the defense to take advantage of prolonged pocket exchanges, and is not known for pursuing opponents when they exit exchanges.

So matching their relative strengths versus how their weaknesses are compared, we can assume that Robert Whittaker should beat Darren Till.

The Fallacies of MMA

One more thing that will help clarify your predictions are some MMA fallacies one should avoid. A fallacy is a flawed argument that appears to be correct but is not based on sound logic. While a fallacy may hold a correct answer, it is not a good way to argue or form an opinion. Some fallacies within Mixed Martial Arts include MMA Math, Record Rating, The Better X, and The Shot fallacy.

MMA math is a reasonably common occurrence by concluding a fight based on a shared opponent by both fighters. For example, we could say that Whittaker lost to Stephen Thompson (15-4-1), who lost to Till, so, therefore, Till should beat Whittaker. However, this thinking is flawed because Till and Thompson do not do the same things.

Record Rating is when one looks at a fighter’s recorded wins and losses and makes a judgment about their level of skill. For example, if one were to look at Jorge Masvidal’s record (35-14), we could assume he was not that skilled. In reality, he is a high-level fighter who was unfortunate not to have fights go his way. The same can be said for an undefeated fighter, just because they are undefeated does not mean they are supremely skilled. You need to examine the performances of a fighter within the context of who they were fighting, making a judgment call about their skills nothing more.

The Better X fallacy assumes that technique trumps all. Just because someone has better credentials or is a better technician does not mean they will win. Tyron Woodley (19-5-1) was considered a worse striker than Stephen Thompson. However, Woodley was able to land the more damaging strikes in their fight. What a fighter’s credentials or skills are matters less than what they are capable of and how that matches with their opponents.

Results are what matter.

The Shot fallacy has to do with looking at past performance and concluding a fighter is shot. For example, many people were claiming that Whittaker lost a step after losing his Middleweight Title to Israel Adesanya. However, the reality is that Whittaker looked faster and crisper than he had ever been. He just seemed to be caught up in the anxiety of having not fought in over a year. Getting caught and concussed early did not help things. There is nothing in Whittaker’s performance that suggests anything other than overzealousness. The reality is that sometimes fighters look bad against certain opponents. They could have a bad weight cut, an injury or, an off night. It’s illogical to look at a single performance and conclude that a fighter is past their prime.

How to Predict a Fight

So here are my tips that may help you get your predictions to the next level. The main event at UFC Fight Night 174 looks to be a banger. Hopefully, Whittaker vs. Till teaches you how to predict a fight.