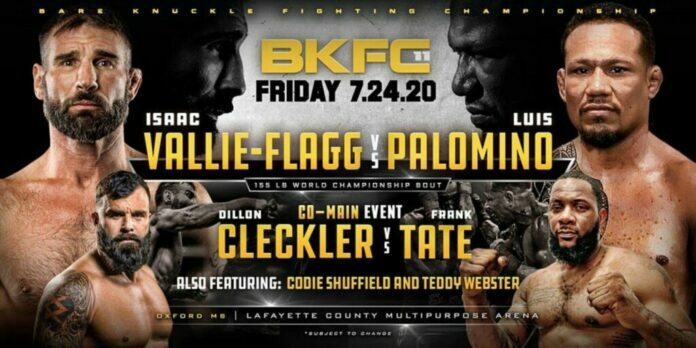 BKFC 11 is days away! After a long forced break from the ring, due to the pandemic, Bare Knuckle FC is back this Friday night. It features an excellent card headlined by a lightweight title fight between Issac Vallie-Flagg and Luis Palomino. The rest of the card should result in fireworks as well, as the competitors toe the line for our viewing pleasure. For the fans, the event will be carried live and free on Facebook and Youtube. You can find the BKFC 10 results, here.

This is going to be a really fun fight. Luis Palomino was originally supposed to take on Jim Alers for the title, but Alers was forced to withdraw due to Covid-19 exposure. In steps UFC veteran and two-time BKFC winner Isaac Vallie-Flagg. He’s won his previous two BKFC fights via stoppage and has earned his title shot here. Vallie-Flagg has good technical boxing, but what separates him from most is his durability and toughness. He’s got great cardio and never stops coming at you.

Luis Palomino had been struggling in mixed martial arts losing four in a row before making the transition to Bare Knuckle FC. He faced a highly ranked fighter in Elvin Brito in his debut and looked tremendous earning a unanimous decision victory. That win put him in position for a title fight, and he draws Vallie-Flagg.

In Palomino’s debut, he showed good footwork and really sat down behind his jab. He went five rounds and when the fight was over, neither man looked much worse for wear. That was a result of solid defense rather than lackluster offense. He won’t escape a fight with Vallie-Flagg unscathed. He’ll have to weather some storms.

At the end of the day, this is a fight between two guys with solid boxing and technical footwork. Palomino could use better head movement and Vallie-Flagg could be better served to not be so willing to stand in the pocket. When the fight ends, one of these two will be getting a shiny new belt around their waist. All things considered, it will likely be Isaac Vallie-Flagg with the gold.

Dillon Cleckler is a formidable heavyweight standing six foot three and weighing in just under 260 pounds. He has a very good record in MMA of 10-1 but has decided to bring his heavy hands to the BKFC ring. Cleckler won his last five MMA contests all via stoppage and has tons of power. He throws heavy, straight punches and does so early and often. If you haven’t seen him fight, find him on Youtube and check it out. He’s a beast.

Frank Tate hasn’t enjoyed the same level of success inside the sport of MMA that Cleckler has. He’s gone a rather pedestrian 6-7 and has dropped three of his last four contests. The 44-year-old striker has decided to take his skill set to the bare-knuckle world and try his hand there.

This should be a fight where the judges can run to the concession stand and grab a hot dog and a beer as they likely won’t be needed. All things considered and weighed, Dillon Cleckler will be a heavy favorite here and for good reason. You can expect him to come into the ring and land early and often. This one seems tailor-made for Cleckler and it would be very surprising to see Tate make it out of the first round. All Cleckler, who wins via knockout, making a big splash in the division.

Elvin Brito came into BKFC with a lot of fanfare and hype. In his debut, he defeated Harris Stephenson via fifth round stoppage but has since dropped back to back fights to Jim Alers and Luis Palomino. No shame in losing to those guys naturally as they were supposed to face off in the championship clash in the main event. Brito has great fundamentals and footwork but against Palomino, he was unable to get off any damaging strikes and played the counter role just a tad too much. He will find a willing competitor in Harris Friday night.

Speaking of Kaleb Harris, he produced the BKFC knockout of the year last year when he flatlined Johnavan Visante at BKFC 7. Take a look below.

Kaleb Harris is a scrappy fighter who enjoys pushing the pace and staying in his opponent’s face. That might work against him Friday night as Brito is a counter-puncher who does well answering back. Harris will have to be smart and engage and disengage at angles, or he’ll find himself getting beaten to the punch as he tries to deliver.

This is a heck of a fight on paper and should live up to the hype. You’d be wrong to anticipate this being an all-out firefight, but it should not be a long drawn out technical bout either. Thinking somewhere in the middle. I expect Brito will at one point or another catch an overzealous Harris entering or exiting his range and could sting him. It wouldn’t be shocking to see this go the distance, and if it does it favors Brito. Going with Brito here behind a solid jab and some top-notch counterpunching.

Codie Shuffield will be making his BKFC debut Friday night as he welcomes Marvin Hunt to the ring. Shuffield has some MMA experience and boasts a record of 9-3. Shuffield also has some pro boxing experience. He loves the idea of bare-knuckle fighting and is the son of a former world champion kick-boxer. Not only that but he is from Mississippi where this weekend’s card takes place. It’s safe to assume he’ll have a hometown edge. Codie Shuffield actually defeated the UFC’s Greg Hardy in Hardy’s boxing debut.

Herbert Morgan is a fighter with some experience in MMA. He’s 4-7 and two of his four victories come via way of submission. Seems like an odd transition into the world of bare-knuckle boxing. In his last bout, he was defeated by Tee Cummins who will be competing on the undercard of this event as well. The thing that Morgan has going for him here is he’s a local fighter and the fans should be in his corner.

This is a good fight and could result in some tremendous action. Codie Shuffield is the favorite here and at the end of the night, he should win this via decision.

Louis Hernandez and Bobby Taylor are both making their bare-knuckle debuts Friday night. Taylor is 6-11 in MMA and has losses to Kaleb Harris and the UFC’s Bryce Mitchell. Taylor is as game as they come but doesn’t have the best technical abilities heading into this fight. Louis Hernandez comes from a boxing background and has a record of 8-0-1 and has won two of three via stoppage.

Chris Sarro is making his second trip into the BKFC ring after winning in his debut against John McCallister at BKFC 9 via first-round stoppage. He looked tremendous in that fight and he should be a favorite again heading into this clash. Victor Jones is 5-12 in MMA and has dropped seven of eight. That said, he won his last fight against Richard Wolfe.

Should be a fun fight, but Chris Sarro has more tools at his disposal and should find a way to get the stoppage victory here. Chris Sarro is likely a star in the making for BKFC.

Joe Elmore vs. Will Chope

Will Chope has a wealth of MMA experience and has a record of 38-16. He will make the transition into the world of boxing sans gloves Friday night when he faces off with Joe Elmore. Elmore has one boxing bout, a loss to Justin Biggs. In all fairness to Elmore, I couldn’t find too much on him. Going with the safe play here, Chope via TKO.

Tee Cummins is 2-0 in MMA and brings his talents into the bare-knuckle FC ring. He has heavy hands but he isn’t a traditional boxer. When studying film of him, his ground and pound stood out. John McCallister is 0-2 in MMA and 0-2 in the world of bare-knuckle boxing. He lost in his BKFC debut to Chris Sarro via first-round stoppage. He is more than likely headed for a similar fate here against Cummins.

Couldn’t find too much info on either of these two fighters who are both making their BKFC debut Friday night. Detrailous Webster goes by “Teddy” and he has one professional boxing match that resulted in a second-round TKO victory for him. It’s not usually a good sign when you can’t find any info for a fighter, and for that reason, expect “Teddy” to pick up the win Friday night.