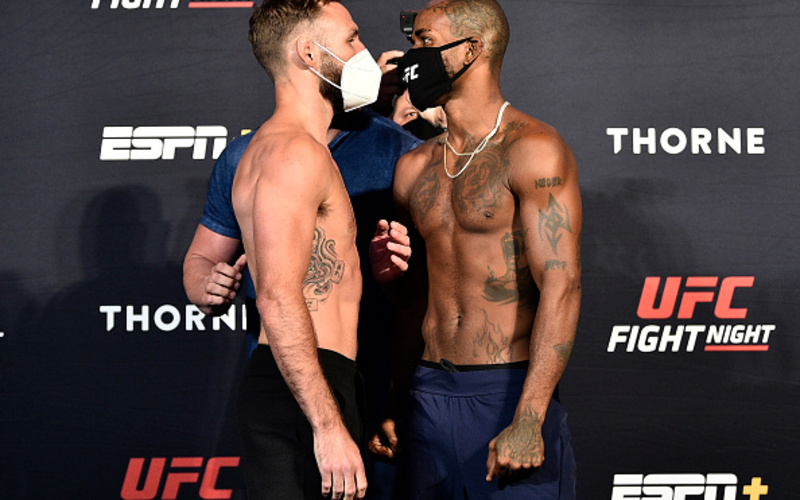 MMASucka staff picks are in for the weekend. UFC Fight Night 173 will take place later this evening, August 1 returning to the United States following a two-week visit to the United Arab Emirates for “Fight Island.” Tonight’s event will go down, once again, from the UFC APEX in Las Vegas with the main card beginning at 9:00pm ET (6:00pm PT) on ESPN+.

Dangerous middleweight strikers Derek Brunson and Edmen Shahbazyan will meet off in the main event. Brunson enters his 17th fight with the UFC, his promotional debut coming against Chris Leben in 2012. The former NCAA Division II standout wrestler has shared both highs and lows in the octagon, defeating many of his opponents yet falling short in cracking the top of the divisional ranks. Brunson currently rides a two-fight decision streak in his first fight of the new year. His opponent, Shahbazyan, burst onto the scene after an electrifying performance over Antonio Jones in mid-2018. The 22-year-old still remains undefeated as a professional trained under the likes of notable coach Edmond Tarverdyan. Sharing a combined 20 knockouts in 31 victories, expect both Brunson and Shahbazyan to put on an exciting show as they look to climb up the middleweight ranks.

Scotland’s Joanne Calderwood will faceoff against Brazil’s Jennifer Maia in the co-main slot. Calderwood will look to follow-up a split decision over Andrea Lee last September while former Invicta FC champion Maia aims to rebound after a decision loss to Katlyn Chookagian.

Due to a late change, the main card fight between Ed Herman and Gerald Meerschaert will not be included on this weekend’s picks.

Check out our staff picks for UFC Fight Night 173 below.

Staff Records after UFC on ESPN 14:

*Note: not all staff has picked for every event*
**Note: Bellator 242 results have been added to the records despite no posted article**