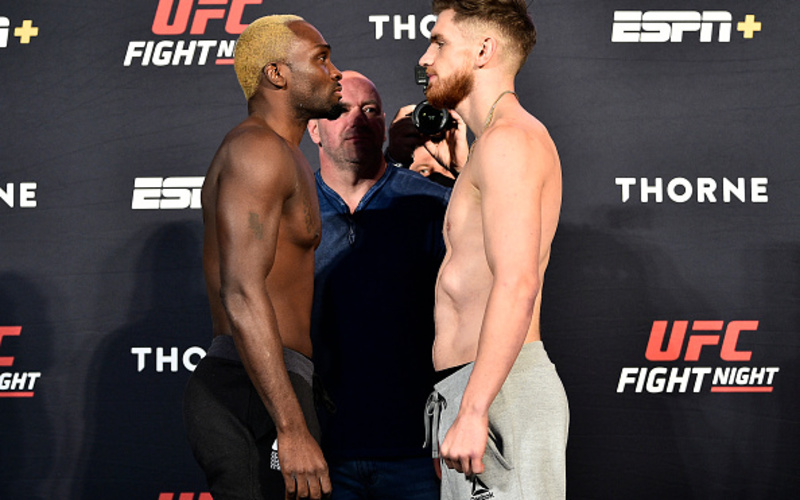 After a successful trip to Fight Island, the UFC is back in Las Vegas and we have got you covered with UFC Fight Night 173 results all night long. Their first card back in Vegas will feature a special three round main event in the middleweight division. Originally scheduled to be a women’s bantamweight main event between Holly Holm and Irene Aldana, that fight fell through. Now filling in to be the main event will be a three round middleweight fight between Derek Brunson and undefeated Edmen Shahbazyan. Brunson enters this fight on a two fight win streak coming off two unanimous decision wins. The first of those came at UFC Fight Night 151, defeating Elias Theodorou. He then went on to defeat Ian Heinisch at UFC 241 almost one year ago. He looks to make it three in a row against a red hot prospect in Shahbazyan.

Shahbazyan made his debut in 2018 against Darren Stewart, defeating him by split decision. After a successful debut, he faced Charles Byrd at UFC 235, finishing him in less than a minute by TKO. His next appearance came at UFC 239 against Jack Marshman. He picked up his second straight finish that night as he submitted Marshman just over a minute into the first round. In his most recent outing, Shahbazyan faced off against Brad Tavares at UFC 244. Shahbazyan picked up his third straight first round finish with a knockout win over Tavares. He looks to keep the momentum going and pick up a big win over Brunson.

In the co-main event, Joanne Calderwood puts her title shot on the line as she faces Jennifer Maia. Prior to the COVID outbreak, when UFC 251 was scheduled for Perth, Calderwood was scheduled to face the flyweight champion, Valentina Shevchenko. At the time, Calderwood was coming off a split decision win over Andrea Lee. Now, since the outbreak, Calderwood has gotten tired of waiting and has accepted a fight with Maia. Maia enters the fight coming off a unanimous decision loss to Katlyn Chookagian. Prior to that loss, she had picked up unanimous decision wins over Alexis Davis and Roxanne Modafferi. A win for Maia would make the title picture at 125 very interesting.

Kicking off the main card will be a middleweight fight between Kevin Holland and Trevin Giles. Holland enters the fight coming off a TKO win over Anthony Hernandez in less than a minute. Giles is also coming in off a win as he recently defeated James Krause by split decision at UFC 247. After that, Lando Vannata faces Bobby Green in a lightweight bout. These two previously met at UFC 216 as they fought to a draw. Vannata recently defeated Yancy Medeiros by unanimous decision while Green recently defeated Clay Guida by UD. Finally, before the co-main event will be a welterweight fight between Vicente Luque and Randy Brown. Luque is coming off a TKO victory over Niko Price at UFC 249. Brown enters the fight coming off two straight finishes with a TKO win over Bryan Barberena and a submission win over Warlley Alves.

Follow along with MMASucka as we provide you with the results throughout UFC Fight Night 173.

Derek Brunson def. Edmen Shahbazyan via TKO (Punches) at 0:26 of Round Three
Jennifer Maia def. Joanne Calderwood via Submission (Armbar) at 4:29 of Round One
Vicente Luque def. Randy Brown via TKO (Strikes) at 4:56 of Round Two
Bobby Green def. Lando Vannata via Unanimous Decision (30-26, 30-27, 30-27)
Kevin Holland vs. Trevin Giles Cancelled Pre-Fight Due to Giles’ Medical Issues

*Martinez missed weight at 140.5 pounds and will forfeit 30 percent of his purse