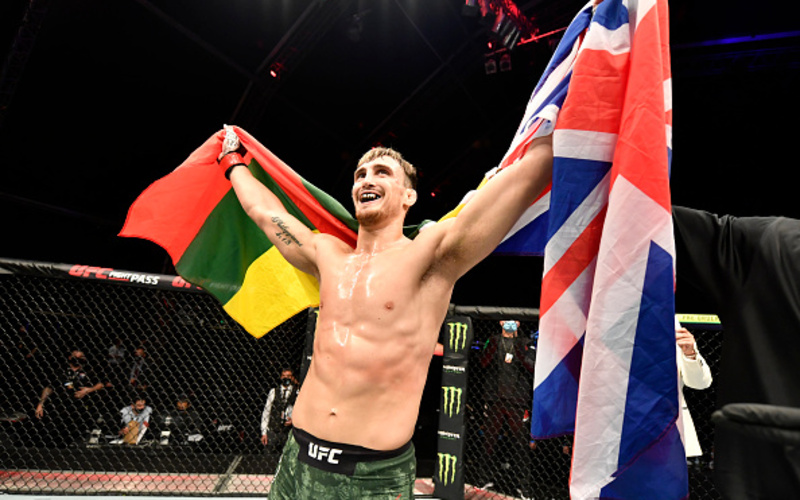 On this week’s podcast, we interviewed rising UFC prospect Modestas Bukauskas who is fighting out of Klaipeda, Lithuania. Modestas Bukauskas is a contender in the Light Heavyweight Division and he has a record of 11-2-0. He is currently on a 6 fight win streak. His past 6 fights have all been by KO or TKO. Before coming to the UFC Modestas Bukauskas fought for Cage Warriors. He became the Cage Warrior Light Heavyweight Champion on June 29th, 2019 when he knocked out Marthin Hamlet Nielsen at the end of the 4th round. He made his UFC debut on June 15th, 2020 against Andreas Michailidis on the UFC Fight Night Kattar vs Ige card.

In an interview with Modestas Bukauskas, he told us about how training was on fight island while being quarantined for two days. He said, “We had a massive room. We just had to move a little bit of furniture and it was literally like a normal training space”. He told us throughout the interview training through corona wasn’t a problem and talked about how he had his own gym at his house. After all the coronavirus talk, we asked him about how the lead up was to his first fight in July and how his nerves were. His response was simple,

“I think Cage Warriors did a very good job in preparing you for nerves. Being used to being in a high profile fight, it made me more ready. This is what I have been preparing for my whole life. It just felt like another fight”. This was very interesting and while watching his fight, you could see he was ready for the fight.

He wouldn’t tell us his opponent, but while writing this, they announced who he’s fighting next. Modestats Bukauskas will be fighting Jimmy Crute at the UFC event on October 17th. This will be a great fight and we can’t wait to see “The Baltic Gladiator” back in there!