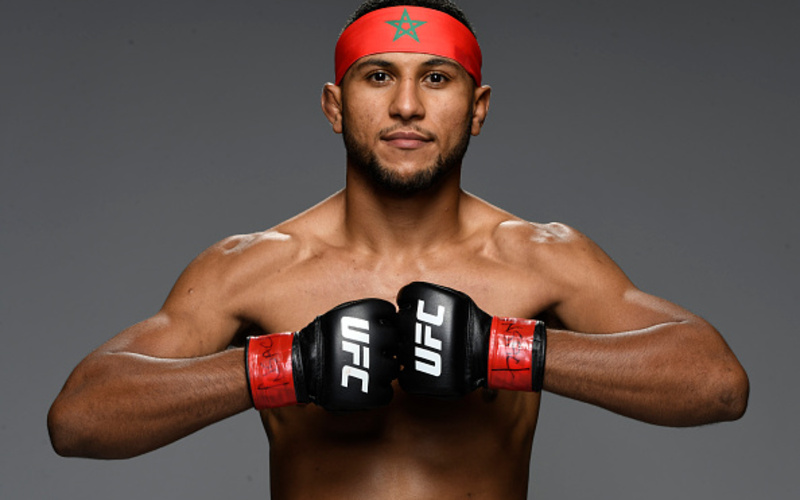 On this week’s podcast at Chaos MMA, we interviewed rising UFC contender Youssef “The Moroccan Devil” Zalal. Youssef Zalal’s last fight was against Peter Barrett on UFC Fight Night Lewis vs Oleinik. “The Moroccan Devil” came away with a Unanimous decision win. Youssef Zalal is now on a 3 fight win streak since he has joined the UFC. He is a fighter in the Featherweight division and has a record of 10-2-0. Zalal is from the country of Morocco and is 23 years of age. He is currently training with the FactoryX Muay Thai team.

Before Youssef Zalal signed his first contract with the UFC he was fighting for Legacy Fighting Alliance (LFA) and had a record of 7-2-0 with 5 of those victory’s coming by submission and the other 2 by KO/TKO.

Youssef Zalal had a highlight moment in his last fight landing a beautiful spinning back kick on the jaw of his opponent Peter Barrett. He talks more about it and the rest of his fight in the interview below.

In an interview with Youssef Zalal, he told us many things. One of the first things we talked about was his recent fight on August 8 against Peter Barrett. In his fight against Peter Barrett, he landed a spinning back kick in the first round and we asked him if he was surprised it didn’t put him away. His response was, “I’m shocked that I even landed it, I was just throwing it to kind of feel myself a little. The fight just started, kind of just move around and see how we’re doing. When I landed it, my face was shocked”. Many people in the UFC would have gone out if a spinning back kick landed like that, but Peter Barrett is tough and stayed in there. Also, during the fight, he and Peter Barrett were talking and laughing with each other.

Zalal talks about coaches and what’s next.

Joe Lauzon is now coaching up and coming fighters. He is well respected throughout the UFC community and he is currently a coach for some fighters now. He is a former UFC fighter and appeared on the Ultimate Fighter season five. Youssef “The Moroccan Devil” Zalal has fought three times already in 2020 and has won every fight. His last fight was on short notice and he looked very good. We asked him how many more times he would like to get back in there before the end of the year. His response was simple, “Definitely one or two, go with the time and see how everything goes. Especially now with these days, things can change quickly”. Youssef Zalal definitely wants to get back in there again and he just got a fight for October tenth against Seung Woo Choi. This will be a great fight and we look forward to seeing Youssef “The Moroccan Devil” Zalal back in there!