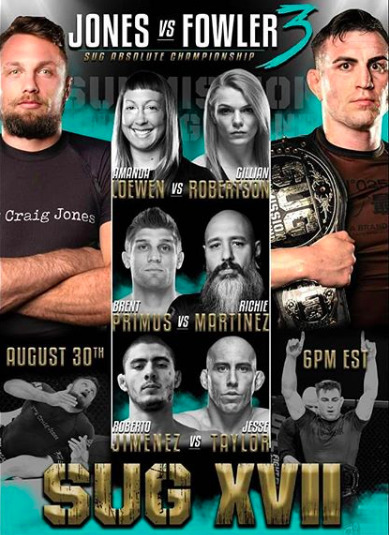 Submission Underground 17 goes down today and grappling fans from around the world will not want to miss this stacked card. From top to bottom the SUG 17 card will be full of excitement, capped off with the much anticipated main event, the trilogy between Craig Jones and Mason Fowler.

Jones and Folwer previously headlined SUG 16 but it ended with a bit of controversy as the referee stopped the match after he allegedly heard a verbal tap from Jones in overtime. This stoppage crowned Fowler the first-ever Submission Underground Absolute Champion, much to the dismay of Jones. However, no one wants to win on a controversial call like that and Fowler was no different as he took to Instagram immediately after the match asking Chael Sonnen to let the two grapplers run it back for their trilogy match. Sonnen being the smart businessman that he is didn’t think twice about this one.

Last night I got the match I’ve wanted since adcc. I had to go through some very tough guys for this opportunity and endure a difficult camp, in the end it was worth it. With that said although I’m leaving Portland with the belt, the win is not satisfying, and I feel the fans deserve more. Craig was kind enough to offer me another shot after our first match and I will happily do the same. Chael, let’s run this back. Craig see you on the next SUG. Let’s take the verbal tap rule out of the picture. #THETRILOGY #CTA

The rest of the main card includes Gillian Robertson taking on Amanda Loewen, Ben Egli will meet Richie Martinez inside the cage and Jesse Taylor will meet up and coming Submission Underground superstar Roberto Jimenez.

The undercard will also be exciting. Some notable matches include Aaron Tiegs matching up against Nicholas Maximov, Phill Schwartz taking on Frank Rosenthal and the final match of the undercard will have PJ Barch meeting Ethan Crelinsten inside the SUG cage.

Keep it locked to MMASucka for Submission Underground 17 results and updates all night long.

Amanda Loewen def. Gillian Robertson via Submission (Armbar) in Round 1 of Overtime

Richie Martinez def. Ben Egli via Submission (Armbar) in Round 1 of Overtime

Aaron Tiegs def. Nicholas Maximov via Submission (Collar Choke) in Round 1 of Overtime