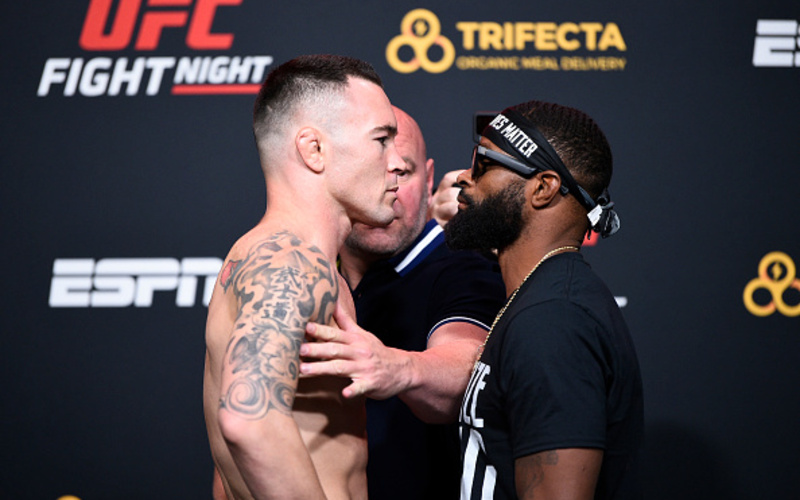 The UFC is back at it tonight and we’ll have your UFC Fight Night 178 results as they occur. The card airs on ESPN+ and is one of the most stacked non-PPV cards in recent memory. In the main event, Colby Covington and Tyron Woodley will settle their grudge. The two former training partners positively despise each other and this bout is a long time coming. It should be a great fight between two of the elite welterweights on the planet.

The co-main event features an entertaining clash between veteran fan-favorite Donald Cerrone and the always exciting Niko Price. Donald Cerrone has dropped five consecutive fights but he’s not fighting for titles at this point, he fights because he loves it and he’s among the most entertaining fighters in the UFC.  Niko Price is unpredictable and can win a fight at any moment from seemingly any position.

Colby Covington def. Tyron Woodley via TKO (Injury) at 1:19 of Round 5

Donald Cerrone and Niko Price fight to a Majority Draw

Khamzat Chimaev def. Gerald Meerschaert via TKO (Strikes) at 0:17 of Round 1

Mackenzie Dern def. Randa Markos via Submission (Armbar) at 3:44 of Round 1

Damon Jackson def. Mirsad Bektic via Submission (Guillotine Choke) at 1:21 of Round 3

Mayra Bueno Silva vs. Mara Borella via Submission (Armbar) at 2:29 of Round 1

Jessica-Rose Clark def. Sarah Alpar via TKO (Knees+Strikes) at 4:21 of Round 3

Darrick Minner def. T.J. Laramie via Submission (Guillotine Choke) at 0:52 of Round 1

Randy Costa def. Journey Newson via TKO (Head Kick) at 0:41 of Round 1