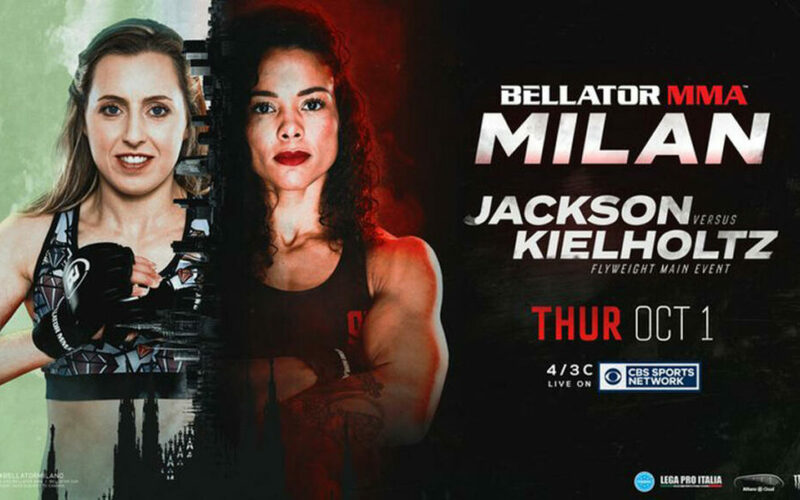 We are live today with Bellator 247 results. The event lost its main event when Paul Daley was unable to make weight and was forced to the hospital. The main event now consists of Kate Jackson clashing with Denise Kielholtz.

Denise Kielholtz def. Kate Jackson via TKO (Left Hand) at 0:43 of Round 1

It didn’t take long for this fight to end. After a very brief feeling-out stage, Denise Kielholtz drilled her with a looping left that floored Kate Jackson seconds into the fight. The referee rushed in and stopped the fight, as the former Bellator kickboxing champion, “Ms. Dynomite” scored the knockout victory.

Norbert Novenyi Jr. def. Laid Zerhouni via Sub (Triangle Choke) at 4:36 of Round 1

Laid Zerhouni landed a big shot right off the bat and it stunned Novenyi. Norbert Novenyi shot in immediately and secured the takedown and worked to set up an arm-triangle. Novenyi kept side control and landed some elbows before securing an anaconda choke. Great defense by Zerhouni but he was then caught in a triangle choke. Zerhouni couldn’t escape and was forced to tap in the first round.

The fighters wasted very little time mixing it up. D’Anna got the better of the striking in the early going, landing some nice overhand right hands and pumping the jab. Moore landed a few shots of his own and both fighters were showing signs of damage early on. Moore was able to land some straight right hands and D’Anna countered with leg kicks. D’Anna tried for a takedown but couldn’t get it completed. Fun first round. Both fighters had their moments, but I’d score it for D’Anna.

Simone D’Anna landed a big kick and then a right uppercut that dropped Moore to open the second round. Moore survived and spent some time on his back before making his way back to his feet. The tide turned as Moore landed a series of shots that hurt D’Anna. He landed a big uppercut that wobbled D’Anna and closed the show with a big right hand earning the TKO victory after himself being hurt.

Chris Duncan def. Iamik Furtado via TKO (Strikes) at 3:58 of Round 2

Furtado and Duncan came out and worked to find their range standing. Furtado landed body and leg kicks giving him an early edge. Chris Duncan landed a nice spinning back kick to the body midway through the round. Both fighters had their moments in the first, and it was really close. I scored it for Duncan but could have gone either way.

The second round was more of the same, back, and forth action. Duncan was the more aggressive of the two, but Furtado landed a nice flurry that included a kick that opened a cut under the right eye of Duncan. Chris Duncan caught Furtado along the fence and unleashed a bit combo that hurt him. He followed it up with a right hand that folded Furtado up for a TKO victory in the second round.

Lewis Long def. Gianni Melillo via Sub (Kneebar) at 2:24 of Round 1

Lee Chadwick def. Ederson Macedo via Sub (Arm Triangle) at 3:28 of Round 2

Blaine O’Driscoll def. Salah Elkas via Sub (Rear-Naked Choke) at 2:26 of Round 1

Monika Chochlikova def. Jade Jorand via Sub (Scorpion Lock) at 3:50 of Round 2