Join us live this evening for Who’s Number One results. It looks to be a tremendous submission grappling event. The card features some of the best of the best and includes a main event between Gordon Ryan and Matheus Diniz.

The co-main event is also going to be tremendous when Craig Jones clashes with the very talented Roberto Jimenez. You can check out the preview we did for the event right here.

Join us at 8 PM EST for the action as we’ll have Who’s Number One results as well as recaps on a lot of matches. The event takes place and can be seen at Flo Grappling with a subscription package.

Both men came out looking to be the aggressor. Ryan shot for a takedown and got top position and then temporarily escaped. Diniz had top position next and defended against Gordon Ryan’s very aggressive guard. Ryan against swept Diniz and this time immediately mounted Matheus Diniz. Ryan stayed in the mount for nearly five minutes. Matheus escaped but wound up on the bottom again and this time was in trouble as Gordon Ryan submitted him with a heel hook.

Roberto Jimenez got top control early and started looking for openings. Craig Jones grabbed a leg and used it to sweep Jimenez, and the lock was pretty tight. Roberto was able to escape and the match continued. Jones immediately went for another heel hock, this time locking it up and earning the submission victory.

There was a massive size difference between these two. Garcia had eight inches in height and what looked to be 100+ pounds in weight over Clay. Garcia scored the early takedown but Clay did a good job locking her down and controlling from the bottom. Gabi Garcia did all she could to pass the guard but seemed unable to do so.

Kody Steele and Dante Leon were competitive and Leon operated from the top in the early going. Dante Leon immediately grabbed the neck and went for a quick guillotine choke attempt. It looked good, but Steele was able to escape. Kody Steele tried a backflip guard pass, but he wound up on the bottom. Dante Leon attempted a few chokes, but could not lock anything on. For the third consecutive match, we went to a judge’s decision.

This was a very defensive fight. Geovanny Martinez looked for more submissions, and it could be said he was the busier offensive grappler. For fifteen minutes they grappled, with Miyao being very defensive. Martinez came close with a guillotine choke at one point, but the contest went the distance and the judges awarded Martinez the decision.

A good matchup on tap featuring two bantamweights. Ribeiro operated from top control early on. Monteiro worked a loose guard and did a good job trapping Ribeiro’s leg and controlling her from the bottom. The fighters attacked each other’s legs, with heel hooks and toe locks. They battled throughout the fifteen minutes but neither fighter was able to secure the submission. The judges will announce a decision based on control and attempts.

The battle of welterweights was next as Tony Ramos and Nicky Ryan squared off. Nicky Ryan trains out of Renzo Gracie Jiu-Jitsu and is only 19 years old. Ramos was making his submission grappling debut after an amateur wrestling career. They hit the canvas and Nicky Ryan almost immediately searched for a heel hook and forced the tap in less than 30 seconds.

Willaim Tackett maintained top position throughout most of the fifteen-minute period. This is a submission only promotion, so points for a position are not a factor. Jason Rau was temporarily caught in a triangle and then an armbar but escaped. However, William Tackett was able to catch Rau in a deeper triangle and earns the victory. 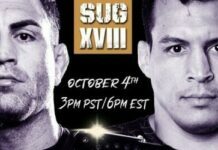 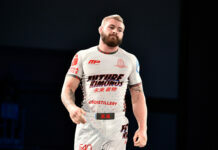