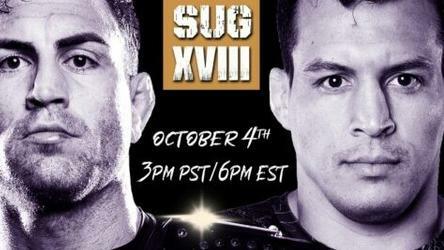 Submission Underground 18 is happening today at the Rose Theater in Portland, Oregon. The main event will feature Mason Fowler‘s second defense of his SUG Absolute Championship against Vinny Magalhães, who will be making his return to the SUG cage after breaking his leg via a heel hook submission loss in his last appearance at SUG 13 against Craig Jones.

Fowler is on a tear, running roughshod through the Absolute Tournament at SUG 15 before submitting the aforementioned Jones for the Absolute Championship at both SUG 16 and SUG 17. Magalhães, meanwhile, is a longtime competitive BJJ mainstay, being a former gi and no-gi champion of both the ADCC and IBJJF tournaments, while also being a successful MMA veteran.

Keep it locked to MMASucka for Submission Underground 18 results and updates all night long.